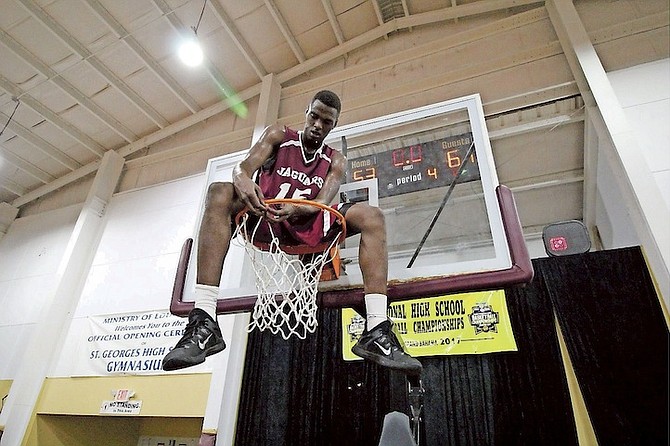 MOST VALUABLE PLAYER Howard Hinzey does the honours of taking down the nets. Photo: 10thYearSeniors

AFTER falling short in the inaugural title game, the St George’s Jaguars protected home court in 2017 and brought the national championship to Jaguar country.

The Jaguars claimed the National High School Division I basketball championship with a 61-53 win over the Tabernacle Baptist Academy Falcons at the St George’s Gymnasium in Freeport, Grand Bahama.

In the GBSSSA championship series, the Jaguars were without Howard Hinzey as they lost the best- of-three series to the Falcons less than a month ago. This time around, in the national title game, Hinzey was the difference down the stretch for the Jaguars.

He finished with 16 points, 13 rebounds and three blocked shots in an MVP performance.

“It feels very good. Last year we made the finals and we came up short, this year we trusted the process, we did what our coaches said and it turned out successful for us,” he said.

“I was very upset I couldn’t be there for my team in the league championships so I was obsessed with getting better for nationals. My mom could tell you, everyday I was running, putting in that work running 3.4 miles every morning because I wanted to come out here and make a difference.”

After completing his high school career on the highest note possible, Hinzey is prepared to take his game to the next level.

“I plan on heading to Pensacola State College,” he said. “I’m looking forward to getting my chance to make it off this island and once I do, making the most of my opportunity.”

Almost immediately, you saw it was a different St George’s team with both Harvey and Hinzey in the lineup. The Jaguars took an early 7-5 lead on a Smith jumper and Thompson’s three from the wing put them up 10-5. Franco Miller dished an assist to Shyrone Kemp to come within one (13-12) and the Jaguars took that lead at the end of the first.

Thompson had a steal and fast break layup and was the most active player on the floor for the Jaguars since he checked in. A three from Butler cut the lead to just three (22-19) with 2:37 left to play in the first half. Alfredo Brown scored a basket but came up hobbled and managed to stay in the game with his team down just two. Smith would drive the lane for a three-point play and take a 26-21 lead before a tip in from Todd ended the half. The Jaguars led 26-23 at intermission.

In the third quarter, the Falcons’ Alfredo Brown’s drive to the basket cut the lead to two, but it was Smith again with another big shot - a three from the wing to make the score 32-27. Smith followed with another three pointer on the very next trip up the floor to give the Jaguars an eight-point lead. Jaguars point guard Davonte Jennings, who finished with six points and six assists, made a successful trip to the line and made the lead 10 before his layup pushed it to 12 on the next possession. The Falcons went on a 6-0 run capped by a Butler layup for a 42-36 deficit, but the Jaguars were able to maintain the six-point advantage to head into the fourth on top 46-40.

Harvey started the fourth with a runner, answered immediately by a Falcons three pointer. Like he had all game long, Smith was there with the answer, tipping in his own missed shot to answer the Falcons score. Hinzey’s post move gave the Jags an eight-point lead with 1:38 left to play, and his block on the defensive end sent the Jaguar faithful into a frenzy.

Jaguars head coach Darell Sears said an early tournament loss to the Sunland Stingers was the wake up call his team needed to avenge the 2016 national title loss.

“To God be the glory great things He has done. We lost early and it was a blessing in disguise,” he said, “because we played more games than Tabernacle and it allowed us to fix some things. We went through some bumps and bruises but we saw growth and we were confident that once we came in and did what we saw that we were doing in the other games we put it all together we would win the game.

“All the guys did well. We had some little issues here and again like any other team but I’m so happy for Kingcy Thompson. He got hurt last year (in the championship game) and he came back and he played so well this year but the whole team did well.”