Call For Toxicology Tests In Aftermath Of Landfill Blaze 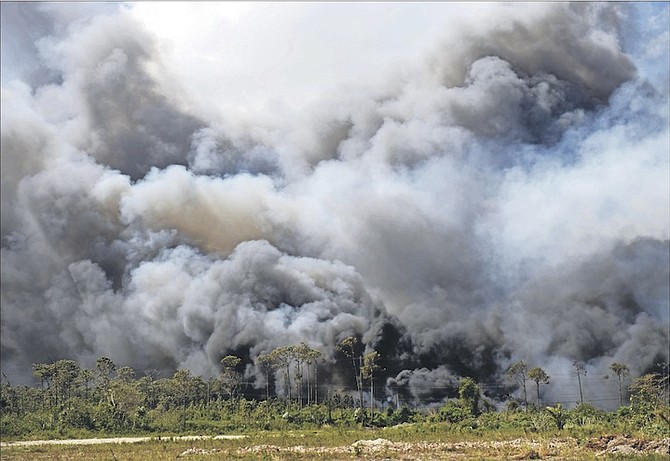 Clouds of smoke from a fire at the landfill earlier this year. Photo: Shawn Hanna/Tribune Staff

LEADING surgeon Dr Duane Sands yesterday said the government must conduct toxicology sampling of the air, ground and water in Jubilee Gardens before declaring the community safe for residents to return after a massive fire at the New Providence Landfill.

In an interview with The Tribune, Dr Sands said because the contents of the landfill are not restricted, there is “no way to know what the hell” residents are inhaling. He said the government has been very “lackadaisical” about the heath impact fires at the city dump and we may not know for “years” what the repercussions of the smoke may be over the long-term.

Residents in Jubilee Gardens were forced to evacuate their homes on Sunday after a fire at the landfill blanketed the community and surrounding areas in thick, black hazardous smoke. According to police, the blaze spread from a nearby bush fire on Fire Trail Road.

On Wednesday, Minister of the Environment Kenred Dorsett said there is no definite date set for when Jubilee Gardens residents will be able return to their homes. Initially, officials said persons would have to wait five to seven days.

Dr Sands questioned who would give the “all clear” and said through conversations with other doctors he has learned that “several persons” had to see a physician because of the smoke inhalation.

“The contents of the landfill is not restricted and it includes, among other things, a number of plastics and other synthetic items. Those things pose a tremendous hazard to health and when those toxic fumes are inhaled it can trigger asthma and other respiratory symptoms,” Dr Sands said.

“We already have a significant number of children in this country in asthma and unfortunately the reason is because of roaches. So we are already starting off with a significant population with asthma and now you have this exposure to smoke, smoke that has not been tested to see what it is.

“We don’t know whether it is carcinogenic or toxic. Basically we do not know what the hell our people are inhaling. We have been very lackadaisical about the health impact of this landfill and the ongoing fire and smoke for years. We do not know what the implications and repercussions are going to be long term. I know there has been an increase in persons presenting themselves because of the smoke.”

0Dr Sands said this latest fire has the potential to be a public health disaster.

“The question that ought to be answered is who will make the decision to tell the people they can return and on what basis will they make that decision? Just because the fire is out it does not make the homes safe,” Dr Sands said.

“What chemical assessment is being done? How do we know it is safe? They need a toxicology sampling to see what is in the air and the ground and also what the water quality is. “This has the potential for a public health disaster. Who is going to determine it is safe? Ken Dorsett? Perry Christie? Leslie Miller? Who? I mean what the hell do they know?”

The fire at the landfill and the surrounding areas has been burning for five days. Prime Minister Perry Christie in a press conference on Monday said the government will pay for the homes in Jubilee Gardens that were affected by the smoke, to be deodorised.