Wheelchair Valet Hailed As An Unsung Hero Of Health Care 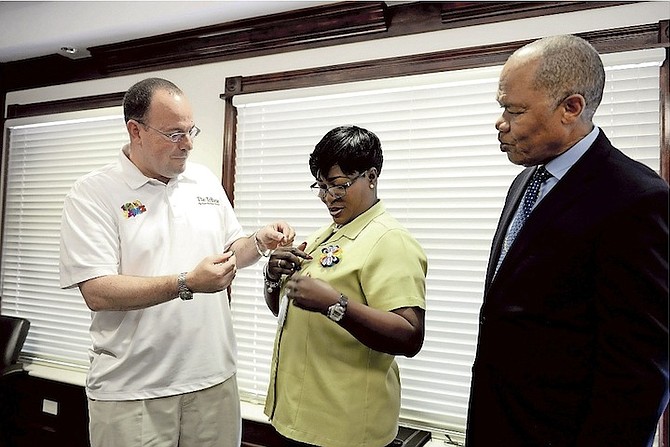 Foundation aims to transform paediatric care in the Bahamas

THE Aidan Roger Carron Foundation has been formed with the aim of transforming paediatric care in The Bahamas.

Aidan Carron was seven months old when he contracted a secondary and potentially deadly auto immune disease, Hemophagocytic Lymphohistiocytosis (HLH), last July after a “catch up” administration of his vaccinations.

He developed a fever of 107.1F (41.6C) and had to be rushed by air ambulance to the Nicklaus Children’s Hospital in Miami, where he spent more than five months being treated with blood tranfusions, chemotherapy, steroids and antibiotics and has returned to their care again recently.

His parents, Robert and Elizabeth Dupuch Carron, have said they do not want other Bahamian families to suffer the same experience and have agreed to release Aidan’s confidential medical records to allow physicians, nurses and researchers detailed insight into the diagnosis, testing and treatment of life-threatening diseases.

In January, The Tribune Media Group, the Public Hospitals Authority and the Foundation announced a partnership to advance the fight against paediatric diseases.

The Foundation’s mission statement is “Together we can fight HLH, Leukaemia, Cancer, Diabetes, obesity and other paediatric diseases by utilising world-class partnerships, creative multi-platform educational campaigns, state-of-the-art diagnostic equipment and treatment protocols, whilst recognising the ‘Unsung Heroes’ in our nation.”

A 16-year veteran of the PHA, Ms Ferguson was recognised yesterday as an “ambassador of excellence” who often made it her mission to do as much as she could to assist the patients she serves by PHA managing director Herbert Brown.

The position Ms Ferguson now holds came about last year as a result of her unrelenting passion to assist and aid. According to Mr Brown, Ms Ferguson saw a need that was not being met and viewed it as an opportunity to expand her role in assisting those seeking care at the hospital.

“Veronica envisioned a wheelchair service that would provide compassionate care to elderly and handicapped patients seeking non-urgent or outpatient services at the hospital,” Mr Brown told The Tribune. “After receiving the requisite training, this is exactly what has been established. Through this exemplary department, patients who need additional assistance are picked up kerbside at the Critical Care Block entrance and wheeled to various specialty clinics and to other clinical or hospital services with a minimum of inconvenience and struggle.”

Ms Ferguson and her assistant, Sherman Davis, underwent training to learn how properly to lift and/or move patients.

Kevin Darville, The Tribune Media Group’s special projects co-ordinator, revealed the wheelchair valet service was given a “sweet upgrade” on Valentine’s Day at Ms Ferguson’s personal expense. “Ms Ferguson greeted each of her valet patients with special holiday-themed treats: cookies, candy and juice,” he said. “Her selfless act of love and kindness has elevated customer service at PMH. Ms Ferguson hopes to inspire other members of the PMH family to independently plan and execute similar efforts to showcase the best quality healthcare that PMH is known for.”

Ms Ferguson, a woman of few words with the spotlight on her, called her achievement “special”. She added that her love for her patients and their wellbeing is what drives much of what she does, not the opportunity for notoriety and awards.

She is the second monthly winner of the award, following veteran nurse Patricia Laing who received the inaugural award in January.

The Unsung Heroes awards programme recognises and rewards excellence, care and compassion in the Bahamas health care system as part of a ground breaking public-private partnership between the PHA and the Tribune Media Group.

It will identify and publicly honour those PHA employees who have gone “beyond the call of duty” in providing levels of care and compassion throughout the islands, in the authority’s two hospitals (Princess Margaret and Rand Memorial), Sandilands Rehabilitation Centre and its 108 clinics and agencies.

Nominations of employees for the monthly award are made by co-workers and by patients and visitors. The winner each month will receive a cash prize, dinner for two, a framed certificate and a bespoke recognition pin. An annual winner, selected from the monthly champions, will be announced and honoured at a gala dinner at the end of the year.

The prestigious awards programme is part of a partnership between the PHA, The Tribune Media Group and the Aidan Roger Carron Foundation announced earlier this year to advance the fight against paediatric diseases in the Bahamas, an alliance local health officials said will have a “significant impact” on the delivery of paediatric care throughout the public healthcare system. Its aim is to raise awareness about and subsequently battle various diseases, such as Hemophagocytic Lymphohistiocytosis (HLH), Leukaemia, Diabetes and Cancer.

The partnership is the brainchild of Robert Dupuch Carron, president of the Tribune Media Group, and his wife, Elizabeth, whose infant son Aidan has been battling HLH, a deadly auto-immune disease. In July, the seven-month-old contracted a high fever following vaccinations and had to be medically evacuated to Florida for specialist treatment in the Nicklaus Children’s Hospital in Miami. Aidan’s plight prompted his parents to establish the Aidan Roger Carron Foundation and forge a partnership with the PHA to ensure that what happened to their son does not happen to other families.

Mr Dupuch Carron said the initiative “is about bringing together partners from all walks of life with a common goal of transforming our approach to paediatric healthcare, so that no child is left behind. It is also about recognising and saluting all those who, without their extraordinary efforts, many other children would not be here.”

The criteria for nominees for the monthly PHA Unsung Heroes Awards encompass exceptional success in an area or aspect of work including consistent and outstanding performance; demonstrating initiative for personal development and professional knowledge while maintaining the highest standards of relationships with patients, staff and the community; consistent and outstanding leadership, actively promoting and encouraging colleagues to deliver a high standard of service; consistently high standard of service delivery to internal and external customers; achievement in promoting links with the community or enhancing the reputation of the PHA in it; and noted participation in community health activities at various levels.

The attributes which make an employee suitable for nomination include attitude, drive to succeed, overall work quality, an exceptional act of service and willingness to go the extra mile.

Nomination forms and full criteria for eligibility and selection can be found on the PHA website (phabahamas.org) or submitted via email to or obtained from Human Resources. They will also be available to patients and visitors at all facilities. Nominations must be submitted by the last day of the month and an independent selection committee will judge the entries. Employees can only win one monthly award per calendar year.