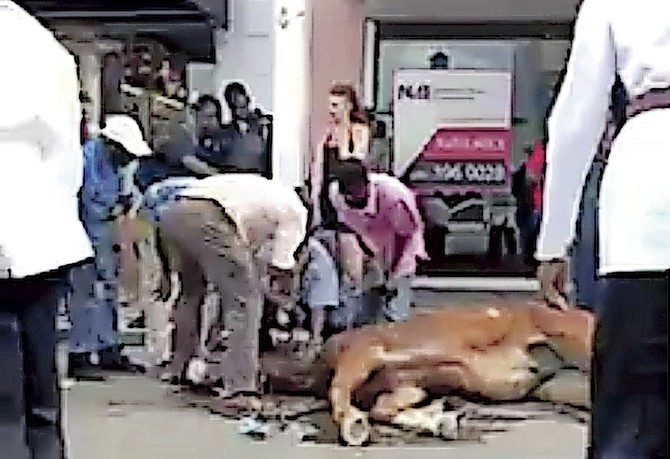 An image from a video posted on social media.

CARRIAGE operators in New Providence have dismissed concerns raised over the treatment of surrey horses around the country, claiming that improvements in sector regulations have ensured that best practices are adhered to.

Vincent Woodside, president of the Horse and Carriage Owners and Drivers Association, yesterday said calls by Bahamas Humane Society President Kim Aranha to have the sector shut down were “disheartening and unjust” because they did not consider efforts being employed to improve the area.

Mr Woodside, a 40-year veteran of the carriage industry, said he has seen first-hand the improvements to regulations that have “guaranteed the absolute best” for the horses being used in the surrey sector.

Among other things, Mr Woodside said the government’s mandated veterinarian checks and strict inspection schedules have brought industry practices to “the best they have ever been”, despite reports of the contrary.

On Monday, The Tribune published comments by Mrs Aranha in which she claimed that the treatment of horses in the sector have long been an “enormous problem”.

She added that despite the government’s best efforts, horses are still being forced to operate in “severe” conditions.

Her comments came in response to a short cell phone video that surfaced over the weekend on social media showing an apparently injured horse lying on the street being attended to by several individuals in the downtown Nassau area.

The horse in question, Majesty, belongs to Mr Woodside, the owner and chief operator of Carriage Affairs. The operation has a complement of five horses and Majesty is the most recent addition.

Clarifying the incident, Mr Woodside claimed that a car stopped short ahead of the horse, forcing the animal to slide to the ground in an attempt to avoid making contact with the vehicle. He claimed that the horse was able to make it back to its feet a short time later and left the scene unharmed.

Addressing Mrs Aranha’s claims directly, Mr Woodside said: “It isn’t anything personal on my end, or on the end of any operator out there I am sure; but when you have people coming out the woodwork to talk our profession down and paint the picture of us mistreating these animals, it is disheartening and unjust.

“This is what bothers me. I have nothing against Mrs Aranha or people like her. All I want from them is that when they go on about what is happening, I want them to tell the whole story.

“Tell about the amount of money persons in the industry spend on feed. Tell about the feeding schedules that we have to adhere because of the government.

“Tell about all the work the government and the vets have done to ensure that everyone operating in this business is doing so with the horse’s best interest in mind.

“The last Thursday in every month, the vets come in and inspect our horses and tell us what is going on with them. If there is anything wrong, they send us to a senior vet like Dr Basil Sands.”

Clutching a handful of feed receipts, Mr Woodside added: “That is all I want from them. If you want to be critical of what we are doing, at least tell the full story.

“We want the best for our horses because they are our livelihood. If they are healthy and capable, they are the main reason we can pay our bills. This is why we work so hard to make sure that they can go out.”

He continued: “Instead of her going on about all of this that doesn’t show the full picture, why doesn’t she come out and assist us with some feed, assist us with other things instead of just coming out the woodwork when she thinks something bad has just happened?”

The Cabs (Hackney Carriages) Board, the governmental agency responsible for the regulation of the surrey industry, has maintained that best practices are being employed across the sector.

The most recent amendment to sector regulations came in late 2012, after a surrey horse collapsed and died.

First of all, the Police had no authority to tell the person to stop filming.

Secondly, it is well known that the horses have been abused over the years and can be seen overloaded or operating during the official resting periods.

The horse and carriage was fine in the fifties and sixties, when there was not that much traffic downtown, but it is unconscionable that they should be allowed to continue to operate under high traffic stress situations of this day and age..

I am aware that for years the Bahamas Humane Society has been trying to have them moved.

To keep them on Bay Street is an abuse and should be stopped.

It's true Econo.....Trib reporting about this Horse's case is with no doubt falling short of the obvious that is seen daily without publication nor prosecution of the offenders. Legislation (albeit antiquated) to protect these Horses nor Legislation enacted in the Amimal Protection and Control Act is not inforced.

Everybody knows that surrey horses are subjected to abuse in the form of neglect here in the Bahamas.

Two of my patients live in rural Oklahoma and have horses. And they are very expensive to maintain. They easily acquire heart and lung complications if they're not eating high quality large amounts of hay and grass. They require constant grooming and neglecting to do so can cause them to contract equine parasitic infections. To keep them fat and healthy owners usually have to feed them large barrels of oats (which is really expensive).

It takes lots of money to raise horses and I doubt that any of these surrey operators have the financial resources to do so. The horse in the above picture is obviously malnourished, sick, and in need of a large animal veterinarian (which is even more expensive). Tourists from the U.S. who are accustomed to raising horses as well as officials from the humane society have often lamented the condition of domestic animals in this country (surrey horses included). So I don't know what Vincent Woodside is talking about.