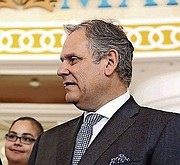 BAHA Mar’s president has pushed back at “baseless” and “untrue” allegations contained in an open letter to the Gaming Board, which accused the resort’s buyer of being allegedly associated with “international crime” organisations through its link to a Macau gaming group.

The allegations were put forth in a paid advertisement by “Bahamians who want a better Bahamas” in The Tribune yesterday and today. The letter asked the Gaming Board to take note of concerns about alleged “documented associations with international crime” and the owners of Chow Tai Fook Enterprises (CTFE), Baha Mar’s buyer.

The Gaming Board is set to hold a hearing regarding a casino licence application by Sky Warrior Bahamas Ltd, a company created by CTFE. The open letter also questioned if any member of the Progressive Liberal Party has direct or indirect interest in Sky Warrior Bahamas.

In response, Graeme Davis has refuted the allegations. “The accusations presented in The Tribune on March 28, 2017 against Sky Warrior Bahamas Limited, Chow Tai Fook Enterprises (CTFE) and the Cheng family, being the owners of CTFE, are completely baseless and untrue,” Mr Davis says in a statement published today in The Tribune.

“As president of Baha Mar, on behalf of CTFE, I would like to confirm CTFE’s unwavering commitment to good governance in CTFE’s global business operations. CTFE is widely recognised by our employees, customers, partners and other stakeholders for the integrity in how we do business and who we do business with.

“It is critical to understand the truth in the business relationship between the Cheng Family and CTFE with respect to the unfounded and false business accusations presented (Tuesday).”

Mr Davis’ statement says CTFE does not operate casinos in Macau. However, he says an entity related to the group “is a minor and passive shareholder” in a company called STDM, which he said “operates casinos in Macau under legal gaming licenses”.

“CTFE does not have any oversight, control, direct or indirect influence in SJM (a subsidiary of STDM) casinos,” Mr Davis also says. “The additional accusations are false, without merit, and significant investigation into each allegation has been made by multiple worldwide gaming authorities.

“ ... The CTFE company, Sky Warrior Bahamas Limited has applied for a gaming license and has undergone a rigorous application process. We have submitted all the required documents and disclosures requested by the Gaming Board, being fully cooperative in the process. Holding a gaming license is a privilege which requires complete transparency and integrity of our world class management team, our leadership at CTFE and the Cheng family.”

Mr Davis adds that Baha Mar is committed to the country’s development and has had more than 14,000 job applications to date. He says the resort’s initial phase will generate more than 1,500 jobs for Bahamians and subsequent phases will bring that total to over 5,000 direct jobs.

This is not the first time concerns have been raised about an alleged link to organised crime and CTFE.

Graeme Davis was over heard saying: "Mon Dieu! I never knew the Fooking company that employs me is so well connected to organized crime."

Bahamians don't say "Mon Dieu". You wouldn't by any chance have a doppelganger on here as well, would you?

Comrades! Keep media pushing around and threatening Chow Tai Fook Enterprises (CTFE), Baha Mar’s buyer, and it could get much worse out at Cable Beach - if they do their own risk assessment forensic examination about investing in Bahamaland?
I mean, Izmirlian, tried "unsuccessfully for over 10 years" to secure a major financial backer for Baha Mar - and only the Chinese were prepared and capable to put up their $2.5 BILLION in cash, where their mouths were. Careful, if you don't want be back to just a big-ass white elephant, sitting empty on Cable Beach.

@TalRussell: The vast majority of us would prefer a "white elephant" to the Red Chinese Mafia any day....but not you of course! You must be such a crooked s-o-b; one who would sell their dear old grandmother or any of their young children to Lucifer if doing so would put a dollar in your souless pocket!!

Oh Dear, Comrade Reality_Check, sure does sounds likes you want do away my Nana. She's a committed atheist. This is her only crack at life. There is no afterlife for Nana.

It just might be a big-ass yellow elephant. Heard a very interesting tale. I caution that it just might be a tale, so take it with a grain of salt (or a grain of rice). The story that I am about to tell is for demonstration purposes only. It is not true. Remember, this is all speculation.

Why would those fooking guys want to buy a white elephant in a land where tourism is dying? They are much better at math than we are. (How do you know if a Chinaman has broken into your house? -- your cat is gone and your math homework is done!). So why buy a mega hotel with a poisoned name in a run-down neighbourhood of a country?

Funny tings tend to happen in China when you have too much personal money. They think that you are corrupt -- a capital punishment crime. The chairman of the company disappears from his Hong Kong digs. Chinese think that he is guilty. Needs to be punished.

If you run afoul of the ruling Commie class, its is jail, then a judge, and then being frogmarched to the square and receiving 7.5 grams of lead into the the back of the head. Then your family gets the bill for the 9mm Parabellum ammunition that is used in splattering your brains on the cobblestones.

So how do you avoid the corruption charges? You launder your money through overseas investments like casinos. Even if nobody comes to your casino, the vast profits are still repatriated. Almost like a Chinese laundry for money. Handy dandy things. Erry little Chinese oligarch should own a Baha ha ha ha mar. Comes in handy. "Honest Mr. Honourable Chink-Judge, sir, I made all my money from da Baha ha ha Mar casino".

Surely, just a theory; mere speculation for purposes of demonstration.

As well, sounds like an excellent chicom business model.

that is the chingret business model for the caribbean at least..