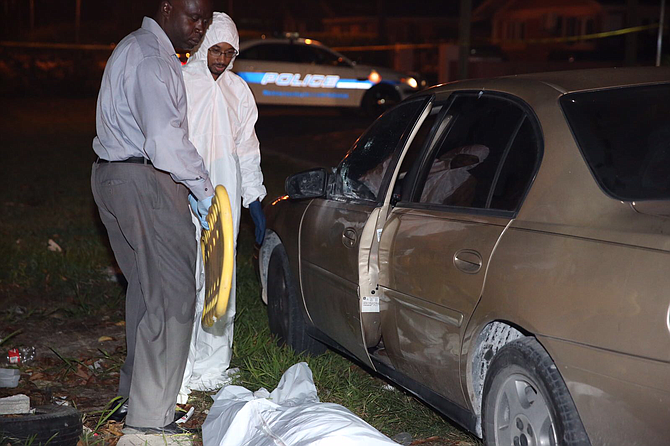 Investigators at the scene of the fatal shooting of a man in a car at Whitaker Close early on Friday. Photo: Terrel W Carey/Tribune Staff

A MAN was shot and killed while sitting in the driver's seat of a vehicle in the Carmichael Road area early on Friday morning, police have said.

According to Chief Superintendent Solomon Cash, officer in charge of the Central Detective Unit (CDU), the car's engine was still running when officers arrived at the scene at Whitaker Close off Carmichael Road.

He said sometime around 12.30am police received information of a shooting at the location. Upon arrival, he said officers found a silver vehicle parked on the eastern side of the street.

A preliminary check of the vehicle revealed the lifeless body of a man, who appeared to be in his early 30s, Chief Supt Cash said. Emergency Medical Services (EMS) personnel were summoned and officially pronounced the victim dead at the scene.

Chief Supt Cash said police have no motive for the murder. However, it pushes the country's murder count to 54 for the year, according to The Tribune's records.

"We don't have an identification on him yet but we are appealing to members of the public who live in this vicinity or who may have been riding in this vicinity who may have seen something that they can feel free to contact the police at 919 or the central detective unit at 502-9991, 2 or 3," he said.

On Monday night, a man was shot and killed in Englerston while ordering food, hours after another man was shot multiple times one corner away.

At the time, Chief Supt Cash said the first victim was walking through Cordeaux Avenue when he was approached by two men and shot multiple times. He was rushed to hospital, where he is listed in critical condition.

Hours later, around 10pm, another man was ordering food, one corner away through Minnie Street, when he was approached by two men and shot.

However, Chief Supt Cash could not confirm at the time if the shootings were related.

PLP has started counting again after taking a break for 5 years!

The news media can start to count now. how many murders, it is sad that they have done this murders should not be attributed to political parties, But it is the way of the Bahamas, one murder under the FNM after one or two days in power.

Marvin Dames can do nothing about it.

The United States has started a nationwide round up of gang members. While most will face criminal charges in the US, those with no immigration status will be deported to their home country. The most feared and deadly gang in the US is the MS-13 which has origins in El Salvador and is now 10,000 gang members strong. Does the bahamas need to follow this action and attempt to disband gangs in an effort to cut down on murders" "MAY 11 2017, 6:41 PM ET ICE Says Over 1,000 Gang Members Arrested in Nationwide Sweep by PHIL HELSEL SHARE Share Tweet Email Print Immigration and Customs and Enforcement agents have recently arrested over 1,300 people in a large gang-enforcement operation across the United States, officials said Thursday. Twenty-one of the 1,378 people arrested were taken into custody on murder related charges, seven were arrested on rape or sexual assault charges, and 280 were arrested on immigration violations, ICE said. ICE said in a statement Thursday that 1,095 of those arrested in the latest action were confirmed as gang members or affiliated with gangs. Of those arrested, 1,098 were arrested on criminal charges, the agency said. "Gangs threaten the safety of our communities, not just in major metropolitan areas but in our suburbs and rural areas, too," Acting ICE Director Thomas Homan said in a statement. The Department of Homeland Security said the six-week operation was the largest gang round-up ever conducted by DHS' office of investigations to date. Image: Thomas Homan announces the results of a national operation targeting gang members and associate ICE acting director Thomas Homan speaks during a news conference in Washington, Thursday, May 11, 2017. Susan Walsh / AP Of those arrested 933 were U.S. citizens and 445 were foreign nationals, authorities said."