Olympians Burn Up The Track At Fritz Grant Invitational 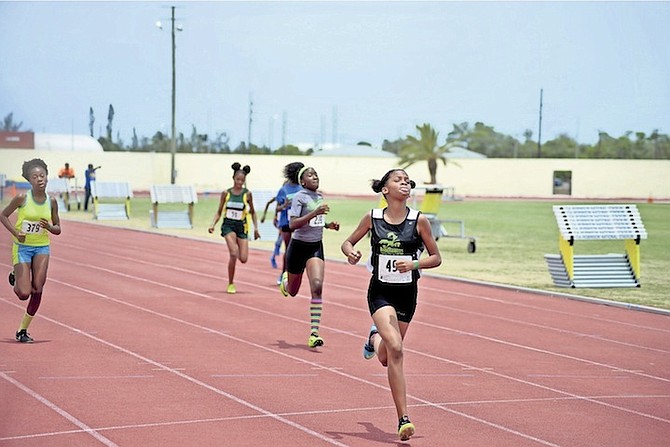 The one-day event was held on Saturday at the original Thomas A Robinson Track and Field Stadium where Newbold and Miller went head-to-head in the open men’s 200 metres.

“It felt pretty good coming off the curve,” said Newbold of his performance. “My hamstring had a little bit of an issue, but I tried not to aggravate it. So coming into the line, I just tried to bring it in and not force anything.

“So far, it’s been a prosperous season, so I want to thank God for bringing me this far and hopefully as the season progresses, I will continue to get better.”

While the 200m remains his specialty, Newbold said his coach, Shaun Miller, has been pushing him to concentrate on the 400m where he can help out the men’s relay team so he’s looking forward to making his contribution.

Miller, who after a year’s absence made his season debut at the Penn Relays last month as a part of the men’s 4 x 4 relay team, said he was thankful to God that he got the opportunity to compete again.

“I’m just trying to get my footing back. I know it will take some time, but I’m really trying to get prepared for Nationals where I will get to compete against the big boys,” Miller said.

As he prepares for the Bahamas Association of Athletic Associations’ National Championships, scheduled for June 23-24 in Grand Bahama, Miller admitted that he has to get his confidence back.

“I had a back quad injury before the trials last year, but I’m working on getting my confidence back. That’s the biggest thing right now,” he stressed. “I know I will be ready to go. There’s another meet here next week so hopefully I will open up with the 400m then and see how it goes.”

The men’s century champion was Karon Dean of Swift Athletics in 11.01.

The meet also saw a number of athletes who competed on the CARIFTA team in Curacao over the Easter holiday weekend and those who are a part of the inaugural NACAC Youth team that will travel to Trinidad & Tobago June 17-18.

Among the other winners were:

Meet patron Fritz Grant said he was appreciative of the gesture bestowed upon him once again.

“I give God the praise, I give God the thanks for the overwhelming support of the clubs and the fans who came out for the meet,” he said. “It’s just a glorious occasion to be a part of another success meet.

“With success comes hard work and we know that the meet didn’t happen without its challenges, but throughout it all, I give God all thanks and praise. I also thank God for the Ambassadors Track Club.’

Grant serves as the president and the head coach of the Ambassadors, one of the oldest track and field club registered within the BAAA. He said the meet certainly provides an opportunity to ensure that the athletes stay in shape after Carifta and for those who are gearing up for the summer meets.

“This was very inspirational and very encouraging being able to give back,” he said. “When you are talking about youth development, this is one of the opportunities for us to demonstrate that. I think the performances in the meet were a good indication of their development.”