'Dan Marino And Friends Bahamas Weekend' Was A Blast 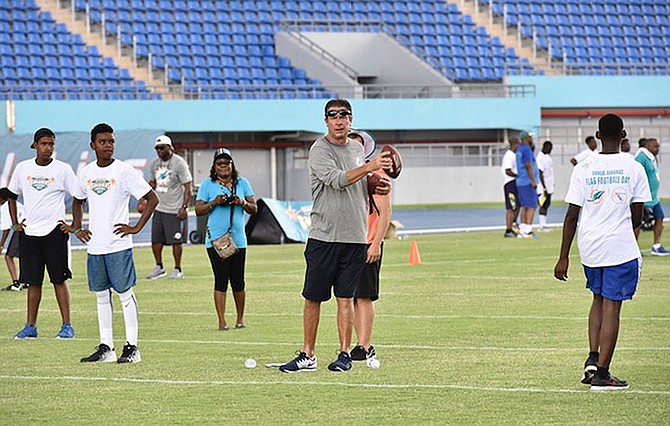 Dan Marino during the youth football clinic at the national stadium.

ANOTHER edition of the "Dan Marino and Friends Bahamas Weekend" celebrated the partnership between the NFL's Miami Dolphins and the Bahamas Ministry of Tourism in a community outreach effort.

The itinerary included a welcome reception on opening night, followed by golf and evening events on day two. Day three included a youth football clinic at the stadium with approximately 200 local football enthusiasts, ranging from ages 6-18, in attendance.

The final events were a flag football tournament and exhibition between the visiting Dolphins Legends, and the Bahamas All-Stars, comprised of former Commonwealth American Football League and Bahamas Flag Football players.

At halftime of the finale, the Dolphins group presented a $15,000 cheque to REACH Bahamas, a group aimed at raising autism awareness throughout the country.

Marino, the iconic Hall of Fame quarterback, said The event continues to bring Dolphin fans and players together as the entire event has grown in popularity since year one.

"I played with these guys and to do this weekend come out here in the Bahamas and enjoy this hospitality. We do alot of other things in the community, the Dolphins, the Alumni group thats here, so it's great to able to come here and do the same," he said.

"I love seeing Duper, Clayton, Nat and all the guys and just being around them because we have so many great memories and life stories together. We don't see each other enough, so it's always good to be with them. I'm thankful for the support of the Miami Dolphins, for the families of the kids that come out and support this clinic and all of the events surrounding the weekend."

Hundreds of supporters took to the Thomas A Robinson National Stadium Saturday, as the three-day schedule of events culminated with action on the gridiron.

excited about being out here and being a part of it. It grew from last

year and we certainly look for that to continue," he said. "We want to

have the kids here in the Bahamas become Dolphins fans, to recognise

that football is a great game, to introduce them to that and hopefully

the game any way we can."

Marino hosted the event this year with several former Dolphins,

Duper, a two-time All-Pro and four time Pro-Bowler is a member of the

"This weekend is always a fantastic event, spending time with these

kids and you guys open up your homes to us. For us its also about that

camaraderie," he said, " [Marino] can still throw the ball. Dick, the oldest guy

at here at 72 years old catching an interception, its tremendous and

that's what it's all about just coming together, giving back and

teams from Nassau, Grand Bahama, Abaco and Exuma. The tournament featured play in both youth and adult divisions. Youth co-ed teams featured play in the 6-9, 10-13, 14-17 age groups while the adults played in men's, women and co-ed divisions.. A Junkanoo-themed celebration closed out the event.

"This partnership is mutually beneficial for all the Dolphins fans we

Miami," Dolphins CEO Tom Garfinkel said prior to the inaugural edition, "We are

communities in such a meaningful way."

Marino, 55, still holds at least a dozen NFL records and is recognised

as one of the greatest quarterbacks in NFL history.

Best remembered for his quick release and powerful arm, Marino led the

Dolphins to the playoffs 10 times in his 17-season career. He was