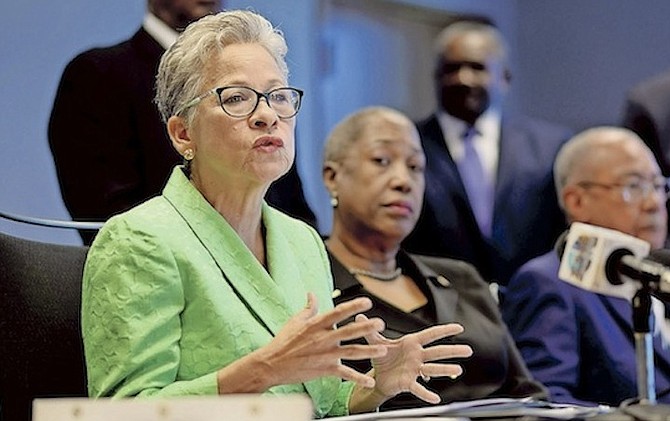 ENGLERSTON MP Glenys Hanna Martin said yesterday that she plans to publicly address speculation that she will challenge interim PLP Leader Philip Davis for the post at the party’s next convention.

In an interview with The Tribune on Monday, Mrs Hanna Martin, the only PLP candidate in New Providence to win a seat in the general election, downplayed speculation over her intentions after a local tabloid reported that she was preparing to launch a bid to lead the party.

The former transport and aviation minister told this newspaper that she has heard many of the rumours concerning her ambitions, and as a result, will “publicly address” the matter in time.

“Trust, when the time is right, I will publicly address the matter,” she replied when contacted for comment.

“There have been a lot of rumours on this, but I intend to make my intentions public very shortly.”

Last week, Mr Davis said he intends to run for the top post of the opposition party whenever it decides to hold a convention.

The Cat Island, Rum Cay and San Salvador MP said the expected convention, once scheduled, would help the party in its attempts at “resolving election issues”.

The PLP held its last convention on January 24-26. At the close of the three-day event, former Prime Minister Perry Christie won with 1,264 votes to 169 for Alfred Sears in a leadership race.

As a result of the May 10 landslide defeat at the hands of the FNM, Mr Christie resigned as leader of the PLP days later.