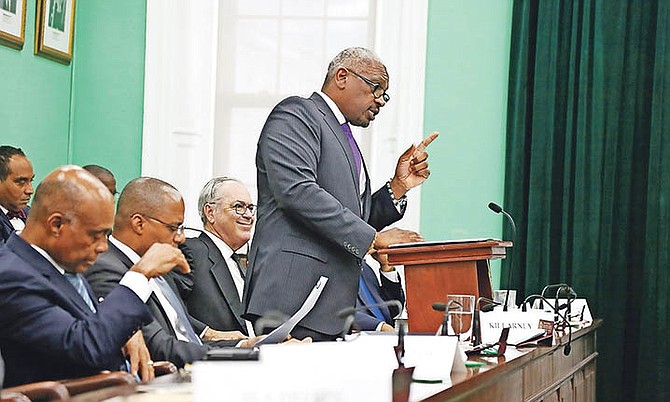 PRIME Minister Dr Hubert Minnis yesterday announced his administration’s intention to amend the Immigration Act to allow all Bahamian women the right to automatically transfer citizenship to their children regardless of where they are born.

And while stressing his administration will “not back down” regarding its December 31 deadline for illegal immigrants to leave the country, Dr Minnis also revealed a retired judge will head an independent commission which will be created to approve citizenship applications. Dame Joan Sawyer, The Tribune understands, is being considered to head this commission.

Just last year in the June 8 gender equality referendum, the electorate was asked whether they would support Bahamian women being afforded the same right as their male counterparts in being able to confer citizenship to children regardless of the county they were born.

“We know that there were four referendum (questions) that were brought to this country that have failed,” Dr Minnis told Parliament yesterday

“My government will make changes to the Immigration Act to ensure that all children born to Bahamian women, single or married, out of the Bahamas are automatically (conferred citizenship).”

Presently, those born in another country to a married Bahamian father are able to automatically receive Bahamian status, but not if the father is non-Bahamian and the mother is Bahamian. Instead, these children would have to apply to receive Bahamian citizenship.

This issue was also a component of the failed 2002 constitutional referendum.

The prime minister went on to blast critics of the government’s recently announced plan of aggressive pursuit and repatriation of undocumented migrants in the country after December 31.

Dr Minnis said it was disturbing that some who claimed to be concerned about human rights and the rule of law seemed to want to suspend laws pertaining certain immigration matters.

He said: “This government will continue from now until the end of the year to interdict and repatriate individuals here illegally. This means individuals from all countries be it black or white regardless. We will continue to enforce the rule of law. In our repatriation efforts, we will be humane and just.

“It is disturbing that some who claim to be concerned about human rights and the rule of law, seem to want to suspend the rule of law when it pertains to certain immigration matters,” Dr Minnis said.

“But let me say here that this government will not back down. All illegals are urged to leave voluntarily before because after December 31 we will aggressively pursue all illegals. We must be a nation of laws, not of personal fancies and extreme positions.

“I agree with those activists who have spoken and written of the need for the Bahamas to act in accordance with our Constitution, and the demands of human dignity and social justice, in the grant of residency and citizenship for eligible individuals,” the prime minister also said.

He continued: “To help advance this goal, my government will create an independent commission to approve applications for citizenship, in accord with the Constitution of the Bahamas.

“Mr Speaker I can say that this commission will be headed by a renowned prominent and distinguished retired justice of the court.

“Except for cases of national security, we will remove the approval of applications for citizenship from the Cabinet. We will continue to make the people’s government more transparent, more accountable and freer from corruption.”

The prime minister’s comments came as parliamentarians brought remarks regarding an amendment to the Constitution for the creation of an independent Office of the Director of Public Prosecution.

The amendment was passed in the House of Assembly yesterday and must now go on to the Senate for debate and passage.

Excellent. This is historic. Thank you Dr. Minnis Long over due that Bahamian women should have the same rights as Bahamian men.

Children should be brought in to have a claim on the assets of the pa also child support jail time for non supporting pa. Law should also protect wives from being raped by no good wutless men who fornicate all over wid loose women an some men and then come home an wan jump on he wife an some pastors tink dis ok cause they can quote scripture from times way back when Pharoah lived.

Its time. Its the womens time too.

Not a good move at all - hubert opposed this move while in opposition. This would be the 9h matter he's flip flopped on since coming to power.

Signs of a weak leader. PGC must be advising him.

So woman are second to men is what your trying to say?

I'm saying as opposition leader hubert vehemently opposed this and supported voting NO to this question.

The only thing that has changed is the side of the floor he sits on why so many U turns?

Here we have a person who allows no room for change. . .NO NOT EVER! Now doc can be that slime you accuse him of. . . but to say that he is no good for holding another position different from his 3 years ago! That's the nature of God himself. . .one word out of his mouth and there will never be an occasion to "turn". . .according to you! He is eternally stable and anchored to his position. . .he knows the end at the beginning! Now to attempt to be the same by any man is the mind of disillusion! It is called "change of mind with addition of new information. . .or human flexibility! You should try it some times. . .I know it is easier to try it when ya party is in government. . .but to adamantly do the opposite and rip doc for having a different opinion from his 3 years ago is pure stubbornness and folly on ya part!

Excellent move, long overdue. What a wonderful legacy this will be for the prime minister.

It's about time...shameful that it took this long!!

This is certainly an historic move, and one that is long overdue. For those of you who claim that this PM has no balls, this move certainly disproves your line of BS.

It's got nothing to do with his gonads.....it's just outright arrogance!

Give it a rest, Mudda!

The fact that the former government did not simply amend the immigration act like Minnis just did to achieve the gender equality they were seeking, lends weight to the suspicions of the clergy that the referendum was not about gender equality but a cloaked attempt to pass bill 4 and open the door for same-sex legislation in accordance with UN requirements.

In the end, its a win/win for the majority of Bahamians, a big step toward gender equality has been taken by Minnis and the constitution remains unchanged and fears of a genderless society can rest for now.

Does the Dimwitted Doc even know that what he is proposing here can only be done through an amendment to the Constitution duly approved by way of a national referendum?! We have a PM who now foolishly thinks statute law trumps our Constitution. I just wish he would stop pointing that index finger of his.....we all know what kind of individual likes to point their index finger at others!

Talking to you is like talking to a tree stump. . .changing the constitution needs the referendum. . .not the IA dude!!

Just trust me, the vast majority of Bahamian people are not as stupid as you think they are.

the man is saying if either of your parents is Bahamian, then so are you. sounds like sense to me. how could you only be a Bahamian if your daddy is one? what rubbish in the 21st century...

It is so refreshing to see that the new FNM government can effect many changes by simply amending laws that are inconsistent with the Constitution ......... That is why the Minnis government must overturn the webshops law and apply Article 26 in the best interest of ALL Bahamians, by creating a National Lottery.

Just be careful Dr. Minnis. Do not think only with the heart. Some people may not like me for saying that but I'm a Bahamian who have traveled plenty, and I've seen that kind of thinking hurt more than one country. Be smart. This may be a good decision for women, or one that can hurt us all and what we are. Our women should be treated fairly, but in matters of anything that is out of the country, be very careful. The name of the family is carried on from men, so I have a bad feeling about the idea of automatic citizenship, but I hope for the best. Just trod carefully, and even if tweaked, do not forsake the constitution. I am not giving men more rights than women. Never. But there are some things that women can be taken advantage of for, but men cant. That is my concern. I've twice seen foreign men married a woman, impregnate her, to gain something from the country she was from. Usually land or citizenship. It had nothing to do with love and it was sad for the women. If a woman is fine by it then, it's okay, but if we have laws that help to protect women, we should be careful when dealing with these kinds of things. It's not a very nice world out there and we must protect our women even if abroad. Also with thinking about the children, maybe doing something just for these in their situation. Maybe something could have been put in place for the children, whom we love too. Do not think about being favored when it comes to doing the right thing for the country. Because the right thing is rarely ever liked. This is just my opinion and I just hope that this was the right thing to do.

I take my hat off to you. . .this is what the Bahamas must do. . .they have agreed to many accords that require us to do so! We can "tickle" around with that issues for as much as we like but not for as long as we like. . .the world will not continue to "ditter" around with our backward political antics for ever!