Concern Over Alleged Mistreatment Of Detainees 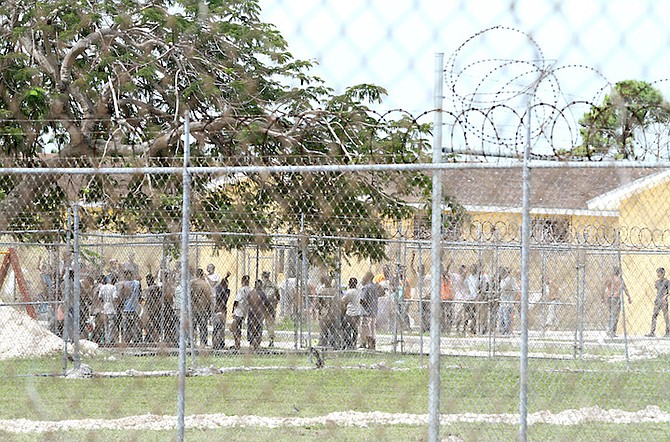 The advocacy group, formerly known as the Grand Bahama Human Rights Association, called on the government to set up an independent body to investigate claims as it detailed “disturbing reports” of cruel and degrading treatment of migrants, as well as visitors to the facility.

In a statement yesterday, it was alleged visits are arbitrarily shortened by guards and that all all conversations between detainees and visitors must be conducted in English.

The RB statement yesterday read: “Relatives have complained of cruel and degrading behaviour by staff at the centre, for example the practice of arbitrarily shortening visiting periods from the scheduled three hours to only a few minutes. The result is that many of those waiting are granted no visit at all. We are told that anyone who complains has their visit ended immediately.”

It continued: “English is not the first language of many of the individuals in the centre, yet we are told that guards demand that the visits be conducted in English. Failure to comply results in the immediate termination of the visit.

“Visitors are allowed to bring food to the detainees, however it has been reported that many do not receive some or all of what is left for them from the guards.

“We are told that complaints regarding the above behaviour tend to be met with degrading and xenophobic remarks by the guards.”

RB suggested the independent committee could be drawn from various local advocacy groups and report its findings to Cabinet. The group warned the government was already under precautionary measures from the Inter-American Commission on Human Rights (IACHR), stemming from earlier testimony over the inhuman and degrading conditions at the facility.

“Thanks to the recent announcement of yet another immigration crackdown on December 31,” the RB statement read, “international human rights groups are once again scrutinising The Bahamas closely over how it handles issue of undocumented migration. We urge the Minnis administration to step in and address the serious problems at the Detention Centre before our international reputation suffers further damage.”

It added: “We also remind the government that the Detention Centre remains an illegal facility, operating outside the rule of law. Its existence is not legitimated by any act of Parliament and those who run it remain, in statutory terms, answerable to no one.”

When contacted yesterday, Mr Joseph said he was not aware of any specific issues with visits to the centre and also confirmed it was not mandatory for migrants and visitors to speak only in English.

“The visits are not private,” he said. “It’s in an open area, so there may be a situation from time to time where you may have a security issue, in that we know certain nationals may try to make plans to escape.

“If we see a security risk then we’re going to address it. We have visitation days and drop off days, and I’m actually minded to combine the two. That way when you bring the food, you carry it in yourself, and give it to them yourself, then we can get out of this altogether, the claims that things aren’t being given.”

As of yesterday, there were 163 migrants detained at the CRDC with plans for a repatriation exercise within the next two weeks, Mr Joseph said.

In August, The Tribune toured the Carmichael Road compound with Mr Joseph, who addressed allegations and criticisms leveled against operations at the facility, specifically the processing and treatment of migrants.

Mr Joseph forecast a number of initiatives at the time to improve conditions at the facility, namely the construction of a medical clinic and refusal dorms, and the refurbishment of existing dorms; and scheduled projects to create an exercise and recreational space; and to outfit and reopen the onsite kitchen.

Giving an update yesterday, Mr Joseph said construction of the medical clinic was advancing on schedule with still just three dorms to house migrants until it’s completed. New beds were expected to be installed before the end of the month.

There are four dorms at the facility with a maximum capacity of 80 people; however, one dorm is currently being used as a temporary medical clinic. Two dorms are designated for men, and one dorm is reserved for women.

Mr Joseph told The Tribune he hopes to get started on reopening the onsite kitchen but is awaiting necessary approvals.

“Central food delivery is prepared at COB,” he said, “and the complaint, especially in the mornings is that the breakfast is arriving too late and it’s cold by the time it reaches (inmates). So hopefully once we get the onsite kitchen opened up, we can address that issue.”

The estimated cost of housing migrants at the CRDC is $30 per migrant per day, according to Immigration Director William Pratt, who told The Tribune in August that sum was calculated several years ago and is likely to be out of date.