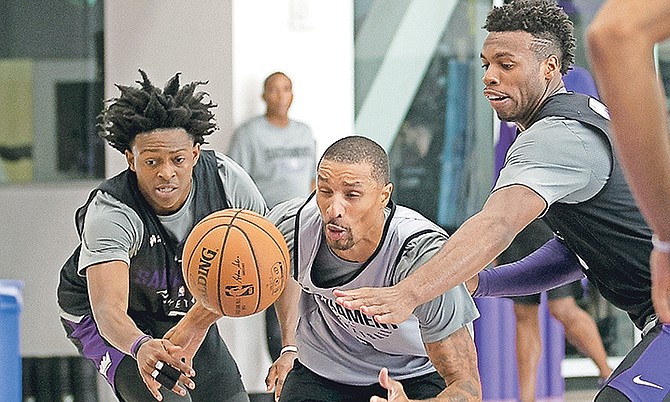 FOLLOWING six days of an intense training camp, Buddy Hield and the Sacramento Kings tipped off the NBA preseason as they continue to refine rotations and style of play for the upcoming 2017-18 campaign.

Prior to the Kings hosting the San Antonio Spurs, Hield outlined his offseason preparation a position battle in training camp and the team's outlook.

"Competition is what it's all about. Everything will work itself out. Just keep working," he told Ailene Voisin of the Sacramento Bee. "You have to keep your body in shape, and I worked on that, and everything else this summer. My trainer was with me most of the time, in the Bahamas when I was there for my children's camp and hurricane relief, and here for about three weeks. I still have to do a better job eating right (those conch fritters are lethal), but I'm more cut than I was. I feel stronger. I think we're going to have a good year. We shouldn't talk about a championship because we are a few years away. But we should be thinking about the playoffs."

Kings legend and current director of player personnel, Peja Stojakovic, said Hield and the highly touted Bogdanovic have the ability to coexist on the floor.

"Their games are different," Stojakovic said.

"Buddy is a scorer, and he is getting better (off the dribble) and on defence.

"Bogdan is more versatile. He scores and makes plays, and he can really pass. When Dave (Joerger) goes small, you might see them. And they both really love the game."

After spending the bulk of the week at the practice facility, Sunday's session shifted to the Golden 1 Center.

"It's good to get out in front of the bright lights and the bigger stage and get out of the practice facility and do different things sometimes. It doesn't have to be beautiful and aesthetically pleasing to the eye to be valuable. We're just trying to lay down the foundation for how we want to play out of some actions off the pass," Kings head coach Dave Joerger said. "There's some competition for some spots, just go out compete and be great teammates, between the lines compete your tail off because by doing that you make the other guy better and that's very selfless and that's what we worry about."

Following last night's game, the Kings travel to face the Spurs once again on the road just days later on October 6. They get their first opportunity for a back-to-back when they face the Los Angeles Lakers and Portland Trailblazers on October 8-9 respectively. Those games are followed by a matchup with the Los Angeles Clippers on October 12 and the preseason concludes on October 13 against the defending champion Golden State Warriors.

The Kings open the regular season on Wednesday, October 18, against the Houston Rockets.