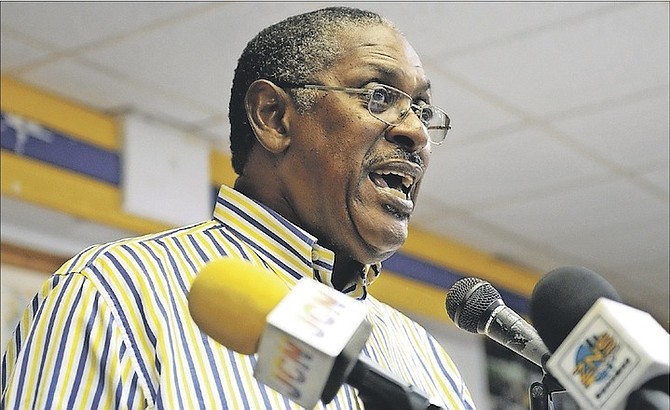 DESPITE his Cabinet post, Health Minister Dr Duane Sands has been voluntarily performing surgeries at the RAND Memorial hospital in Grand Bahama to assist medical professionals there amid staff vacancies.

He confirmed this to The Tribune yesterday after Progressive Liberal Party Chairman Bradley Roberts released a press statement suggesting impropriety on Dr Sands’ part. Mr Roberts said Prime Minister Dr Hubert Minnis, who came to power on a promise to punish ministers who have conflict-of-interest issues, has been looking “the other way” as Dr Sands performs surgical procedures “at the Princess Margaret Hospital after his appointment as a Cabinet minister.”

“If these reports are true,” Mr Roberts said, “Dr Sands in the capacity of Health Minister is in direct violation of established and longstanding cabinet code of ethics and procedures for its ministers as the Health Minister would have placed himself in a fundamental conflict between his private business interests and his public duty. Certainly the Health Minister as regulator cannot self-regulate; it is called self-dealing, an unacceptable and corrupt practice that Dr Minnis vowed to stamp out of government.”

In fact, Dr Sands has not been performing surgical procedures at PMH since he became a minister. He has been performing vascular access surgery at the Rand Memorial Hospital for patients awaiting emergency dialysis treatment.

For one day per month he has performed the procedure free of charge.

The consequences of not performing the procedures are fatal, he said, and the volume of work threatens to overwhelm the two physicians involved if they aren’t helped.

The Tribune saw a letter yesterday from the PHA confirming he has been authorized to maintain “unpaid admitting privileges to assist in the care of patients requiring cardiovascular care,” as stated in his resignation letter.

“Roberts needs to understand not everyone is as mercenary as he is,” Dr Sands said yesterday. “He doesn’t understand that someone might do this and not want something in return.”

During his contribution to the budget debate in June, Dr Sands disclosed he would provide medical help where voids exist in the public health system.

“I understand the concerns of patients, colleagues, students and staff as I leave the practice of medicine,” he said.

“I have trained several competent surgeons to replace me. Where there is a void, we will recruit it to fill that space until one of our own is ready to step into that spot. To fill the void, for a brief period I will provide emergency and back-up coverage.”

I fully understand the exception to save a life who doesnt?

Bradley Roberts is not one who should have the balls to speak about ethics. But as I said before, why are we continuing to give him headline coverage, when all he utters is B---s--t?

Why is it Bradley Gargoyle Roberts cannot seem to notice any "direct violation of established and longstanding cabinet code of ethics and procedures for its ministers" with Perry Christie, Shane Gibson, and Kenrid Dorsett?

Know it all Gargoyle Roberts is also uncharacteristically "mum" on where the missing $40+Million hurricane relief and VAT funds disappeared to!

So if you are a professional person like a pilot, or accountant or dentist or in Dr. Sands case, a specialist heart surgeon and you become a member of the cabinet and remain for five years, how do you stay current in your profession? If one does not get any practice in five years can he/she still be effective after five years absent? All that medical school money goes down the drain?

Getting press coverage does not make one competent, or relevant, rather it sometimes serves the public interest in reminding us all what an ass looks like. Actually, more often than not!

SP this jack ass is a typical plunder loot pillage , All for me mentallity.

Bradley Roberts is suffering from ‘Viagra to the brain ‘... he thinks like a penis.

He thinks that being a dick will make his bigger.

What's this the PLP is saying they don't GAF about Bahamians again? The PLP is confirming they are angry that Bahamians are getting free medical attention because of who is providing it.... At least you DMF's stay true to form.....

Receiving a letter from PMH really makes no sense. he is the boss there he writes the letter and some one signs what he has written. He wants to have his cake and eat it to If he has this bleeding heart. He does not have to break the law. because there are others who are able to have the post of Minister Of health and will do a better Job.

birdie you are a bigger boongy hole than Bradley. Do you have any inkling of what volunteerism is? Ya'll plp is so use to being paid for everything,including work that you didn't do.