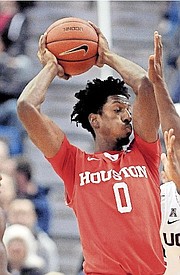 The Grand Rapids Drive are the G-League affiliate of the Detroit Pistons. The franchise began in 2006 and currently play their home games at the DeltaPlex Arena in Walker, Michigan.

The Drive will host the Erie Bayhawks in their season opener on November 3 at home.

Danrad Knowles finished his NCAA career for the Houston Cougars last March as the school record holder with 72 conference games played and is tied for fourth in Houston career history with 126 games played. He finished his senior season with averages of 7.5 points, 3.7 rebounds and one blocked shot per game while shooting 45 per cent from the field.

Knowles was ranked 51st in the ESPN top 100, according to the ESPN with a scout's grade of 94 coming out of high school. The 6' 10" forward was 13th at his position in the state, 10th in the region and seventh in the state of Texas.

Zane Knowles is back into the G-League system following a brief appearance in training camp last season with the D-League's Salt Lake Stats, the exclusive farm team of the Utah Jazz.

After the Herd selected him, Knowles' rights were traded to the South Bay Lakers for returning player Troy Devries.

The Lakers were found in 2006 as the Los Angeles D-Defenders until they were rebranded as South Bay this year. They will play their home games at the UCLA Health Training Center in El Segundo, California.

South Bay has announced the schedule for its 2017 training camp that is set to begin on Tuesday, October 24, continuing through Friday, November 3.

They will open the regular season on the road against the Santa Cruz Warriors at 7pm on Saturday, November 4.

Knowles participated in the Star's Open Tryouts last season before being cut in training camp and eventually signing in Poland.

He spent his freshman year at Grambling, where he was hampered by several injuries. He played in just 15 games and averaged 1.7 points and 2.0 rebounds in 7.8 minutes per outing. After completing a stint at Pearl River Community College (12.6 points, 8.4 rebounds per game), Knowles completed his final two years of eligibility with the Texas A and M Corpus Christi Islanders.

The pair hope to join the list of other Bahamians to play in the D-League that includes Magnum Rolle, Bennet Davis, Anwar Ferguson and Mitchell Johnson.

Formerly known as the NBA Developmental League, in the 2017-18 season, the D-League entered into a multi-year partnership with Gatorade and announced it would be rebranded as the NBA Gatorade League. When the league completed the change over to the new branding, it had changed to referring to itself as simply the "NBA G League."

It also continued its membership changes with the D-Fenders rebranding to the Lakers, the relocation of the Eerie BayHawks to Lakeland, Florida, as the Lakeland Magic; and expansions in the Agua Caliente Clippers in Ontario, California; the Memphis Hustle in Southaven, Mississippi and the Herd in Oshkosh, Wisconsin.