Plp Convention Day One - As It Happened 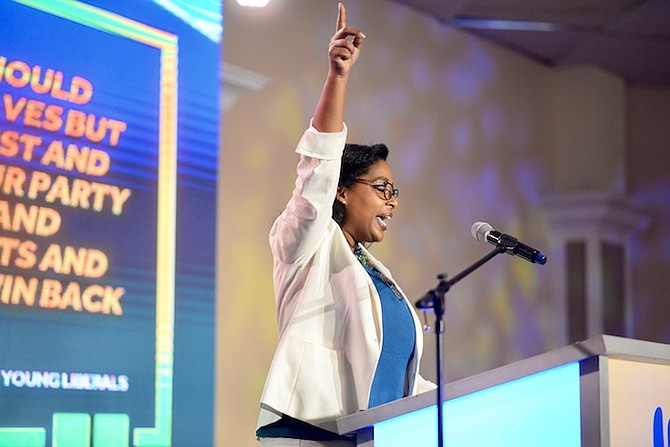 10.00pm: That brings our online coverage of day one of the PLP convention to a close. Don't miss Tuesday's Tribune for reaction to tonight's events. And there will be more live coverage from the convention on tribune242.com.

9.55pm: She says: “I love this country and love this party. Let’s put an end to the cynicism.”

9.50pm: Monique Pindling adds that the PLP became weak, dishonest and lost touch with too many people. She says that the party will move forward with a new, fresh, vibrant leadership. “The new generation of Bahamian voter is a different character,” she says. “We have to earn their vote and treat them right.”

9.45pm: Sir Lynden Pindling's daughter Monique Pindling is now on the stage. She says some in the party - not all - strayed away from core principles. She adds that some in the party became overcome with greed and envy.

Glenisha Albury, Executive Member of PYL at the University of The Bahamas, speaks at the convention.

9.35pm: Robyn Lynes says they are “coming back” to get those who registered but didn’t vote.

9.30pm: The former Senator certainly seems to have livened up the convention floor. She calls for more connectivity between party branches - including the Family Islands.

9.25pm: “You are the strength of this organisation,” Robyn Lynes tells the delegates. “It's you!”

She gets a big laugh when she says: “I'm trying to stay calm because I've got my makeup fixed.”

9.20pm: She says: “On the FNM’s best day, they cannot beat us as a political organisation.” Then, speaking of the party reconnecting, she adds that in “order for us to move forward, we have to take a step back”. 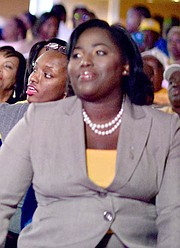 9.00pm: Erecia Hepburn, National General Council Member for Garden Hills, is on the stage. She describes how the PLP has always been a “forward thinking” party.

8.55pm: Andre Kelly, former Chairman of PYL, is speaking from the podium. He asks “are we humble enough to accept the wisdom that is being passed to us young people?”

Speaking of the election defeat on May 10, he says: “Yes we lost, but we are not lost. This is not time to quit but to be eager to serve.”

8.45pm: Glenisha Albury says: “PLPs, our core values and beliefs are still relevant.” She adds that “substance, sincerity and a realistic vision must be the order of the day”. Her speech is drawing applause from Englerston MP and leadership candidate Glenys Hanna Martin.

8.30pm: Tonight's events are underway, Vice Chairman Keenan Johnson giving a lively speech to the delegates. Next up is Glenisha Albury, Executive Member of PYL at the University of The Bahamas.

4.50pm: Englerston MP and PLP leadership candidate is pictured at the party's convention today. She will contest the leadership race with Philip 'Brave' Davis Wednesday.

Obie Wilchcombe at the convention by Tribune242

11.45am: Supporters of the two leadership candidates had their say this morning on who should lead the PLP:

PLP leadership candidate Philip ‘Brave’ Davis is greeted by a supporter at a prayer breakfast at the weekend. Photo: Shawn Hanna/Tribune staff

11.30am: THE PLP convention gets underway today at the Melia hotel in Cable Beach and we’ll bring you live updates over the next three days on tribune242.com. All eyes will be on the leadership contest between Philip ‘Brave’ Davis and Glenys Hanna Martin. Over the weekend, Mr Davis urged party members to unite at the convention but said he is “confident” he’ll retain the party’s top post when the three-day event comes to a close - full story HERE

So where are the FNM...aren't they suppose to be grabbing headlines to distract and draw attention away from the convention?. or maybe they feel its no big deal since they have more than four years before the election. And the PLP still itchin from the cut hip they got in May 2017 Election. But still the FNM needs to be strategizing now to win two terms. 2022 is too early to let the PLP back to the reins of power. The FNM needs two terms to ensure that all the corrupt dinosaurs are gone forever. And one way to do it is to keep the PLP weak and straggely as long as possible.

The FNM does not have to do anything to keep the plp weak. Bwave is doing a good job at that. all the FNM has to do is give us good governance

All the FNM has to do really is to continue making Bahamians second class citizens. and continue to put them out of work. so far they are doing a good job at that.

doc is busy calming the Haitians and Mr. Small things is allowing persons to work without work permits. There are both very busy :its the peoples time: Bahamians are not even mentioned*Remember when he was weeping over Dominica /the young school boy who had lost his life was not even mentioned.

The plp held a convention, Hoping to gain some redemption' After five years of misrule, Under Christie the fool, But we're the fools paying his pension.

I would be embarrased to be seen at this convention and being associated with corruption and bankrupting a country. Any PLP supporters must be brain dead to believebthat brave Davies if elected as leader will do anything different apart from reek total financial destruction whilst feathering his and his own cronies with benefits. Maybe these idiots at the convention need to study basic,basic arithmetic to see how much financial trouble Christie and his cronies have wrought.

Brave will win this hands down.. so New wine in old wine skin... same wine skin

Things that make you go hmmmm...

Hey Lady.. the PLP didn't become weak and dishonest you all were always dishonest......