‘I Was Not Forced Out Of Police’ Insists Greenslade 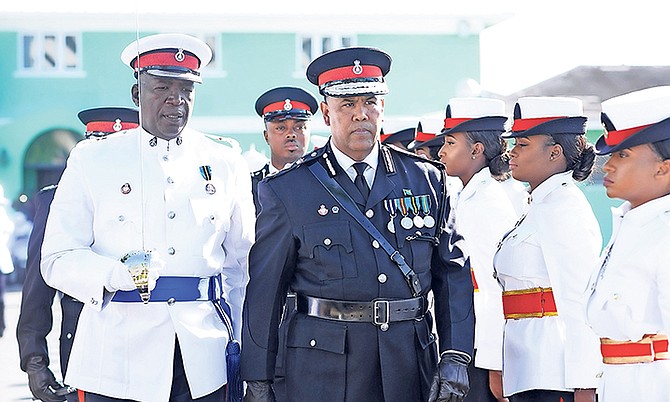 Former Commissioner of Police Ellison Greenslade at the handing over ceremony.

OUTGOING Commissioner of Police Ellison Greenslade yesterday shot down claims that he was forced to step down as leader of the Royal Bahamas Police Force.

“Let me be very forthright in telling you that I was not forced out of the Royal Bahamas Police Force,” he told reporters, the first time he has publicly addressed the Minnis administration’s decision to replace him with new Police Commissioner Anthony Ferguson.

“The prime minister currently has treated me with the greatest measure of respect from the day he won the election,” he said. “There are actually no hidden agendas and news stories. The time has come for me to move on.”

Mr Greenslade said he enjoyed the full confidence of all prime ministers under whom he has served as commissioner, including Prime Minister Dr Hubert Minnis.

“At no time could I recall having any conversations privately or publicly with any of those three prime ministers where I perceived any disrespect afforded to me,” he said.

As for the lengthy period of uncertainty this summer about his future, the former police chief said he had to maintain silence while he went through the confirmation process for his new diplomatic role.

Mr Greenslade defended his time as commissioner, noting, as he often did during his tenure, that “crime trended downward” under his watch.

“We have a vexing problem with this business of murder,” he said. “...People in possession of firearms and ammunition…if we continue to allow them free access to our communities, our murders will continue to go up. I recall getting into a huge debate with people in authority over me because I dared to say one year that I told you, ‘If you don’t change policy, if we don’t look at legislative reform, we’re going to continue to reap the whirlwind.’ That’s not a function of who or what your commissioner’s name is.”

Former Prime Minister Hubert Ingraham said weeks ago that the uncertainty over Mr Greenslade’s future involved questions about giving him maximum pension benefits or not.

Such benefits are given only to those in the police force who have served for at least 40 years or ten years as commissioner.

Although Mr Greenslade served in the force for fewer than 40 years and as commissioner for fewer than ten years, Attorney General Carl Bethel told The Tribune recently that the Minnis administration intends to amend the Pension Act in a way that would allow him to receive maximum pension.

“We are bringing legislation to amend the Pensions Act to capture and formalise what occurred in the 1980s where Richard Demeritte, the auditor general at the time, was permitted to complete his pensionable time while serving as high commissioner to the Court of St James (United Kingdom),” he said. “That practice allowed him to complete his pensionable years in that capacity.”

“The Royal Bahamas Police Force, one of our nation’s oldest public institutions, is dedicated to courage, integrity and loyalty,” Dr Minnis said. “These values have been exhibited in Commissioner of Police (Retired) Ellison Greenslade.”

He added: “I have regularly met with Commissioner Greenslade. I found him to be a man of punctuality, high character, discipline and professionalism.”

Minister of National Security Marvin Dames also took part in this training in Canada when he was a member of the RBPF.

In January 2009, Mr Dames, then senior assistant commissioner of police, was appointed commander for Grand Bahama. Mr Dames was later promoted to deputy commissioner while Mr Greenslade ascended to the RBPF’s top post.

Yes yes.. we know he wasn't forced out..

He and Marvin are best friends.

There is no alternative motive to this...

all Governments are transparent ...

Corruption is all in our imagination...

The Murder Rate is lowest its ever been.

The Economy is growing.

Mr. Greenslade a good choice of words you were not forced to leave But you were asked to go. They gave you, your due and you walked out of the door. we read the papers, and we heard the talk. It is all right.

Mr: Greenslade a good choice of words, you were not forced out. you were asked to go they gave you, your due and you walked out of the door. We read the newspapers we heard the talk. Most of us know what time it is. But it is all right.