Sir Durward Knowles 100 Regatta In Honour Of The ‘Sea Wolf’ 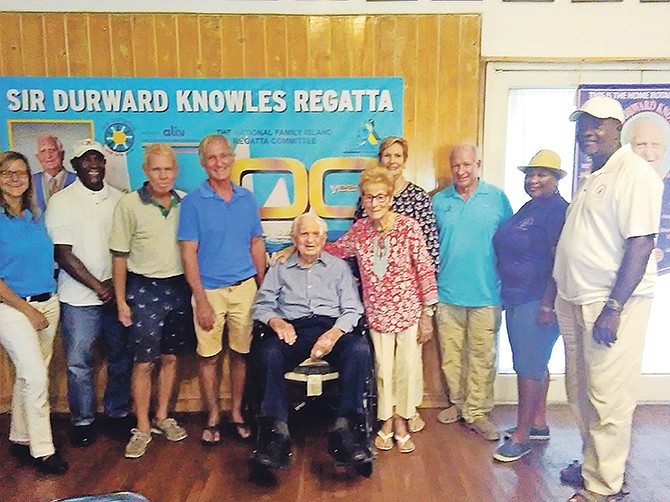 IN a speech where he continued to echo the words “never give up,” legendary Olympic sailor Sir Durward ‘Sea Wolf’ Knowles gladly accepted the sailing community’s One Bahamas joint effort to honour him in the Sir Durward Knowles 100 Regatta, just days before he becomes a centenarian.

In a joint effort by the National Family Island Regatta, the Bahamas Sailing Association and the Ministry of Agriculture and Marine Resources with responsibility for regattas, will stage the blockbuster event over the weekend of October 17-19 in Montagu Bay.

With his 100th birthday falling on November 2, the organising committee said they intend to have more than 100 boats from the sloop sailing and Olympic-style competition competing in the free-for-all regatta as they give back and say thank you to the legendary Knowles, the oldest living Olympic sailing champion in the world.

During a press conference on Saturday at the Nassau Yacht Club where Knowles was flanked by his wife Holly and two of his children, Randy and Charlotte, BSA president Laura Lowe said they are proud to join forces with sloop sailing to see their support to Knowles for all that he has done for the sailing community and the Bahamas in general.

“Sir Durward is a hero of mine. He provides us with an example of how desire and tenacity can get you all over the world in the pinnacle of sports, but not just as a sportsman, but Sir Durward is a hero because he has taken his sports recognition and he has used it for the betterment of the Bahamian public generally,” she stated.

Strachan said that while they will be honouring Knowles for his exploits at winning the Bahamas’ first Olympic gold medal with the late Cecil Cooke in Tokyo, Japan in 1964, they will recognise him for his generosity as a philanthropist to just about every cause in the country.

“When the history of this country is written, he will not only be recognised as one of the greatest Bahamians, but also as one of the greatest philanthropists,” he said. “I don’t know of any other Bahamian who has taken a personal interest and has done so much to improve the lives of his fellow men. “His promotion of One Bahamas is evident of his pride, love and endurance towards his country and its people.”

As an independent nation 44 years old, Strachan said the Bahamas could do a lot better in showing their recognition of such iconic persons like Knowles and he called for a more fitting tribute to be presented to him on his 100th birthday in the following manner:

· Name sailing as the national sport of the Bahamas

When the regatta is held, Strachan said they will also honour his wife Lady Holly for the tremendous support she has given to her husband, not just locally, but globally as he competed for the country.

In the sailing competition, Strachan said more than 31 boats have already signed up to sail in the sloop segment of the regatta from the A to the E class where Knowles has also built a boat called ‘One Bahamas’ that will be sailing as well in his honour.

“We cannot honour Sir Durward by paying prize money,” Strachan said. “These guys are grateful for what he’s done, so they are prepared to sail. Prize money in this regatta is a thing of the past. I think Sir Durward would have my head if I attempted to pay prize money for sloop sailing or any other class to honour him.”

Robert Dunkley, speaking on the organisation of the international Olympic style boats in the regatta, said they intend to sail over the three days because of the different classes with participation from all of the clubs from all over the Bahamas.

“We will be sailing in the optimists sailing for kids 8-15 year-old category, Sunfish, Laser, International 420s and Snipes,” he said. “This regatta is not just junior sailing. This is for adults and juniors and it is going to be a spectacle.

“Anybody who is going to be down around Montagu that weekend will probably see more sail boats on Montagu Bay than there has ever been before. We’re looking for a great tournament.”

Dunkley said they are also expected to have a number of international guests from the Olympic sport to be on hand, whether they compete or not, to help honour Knowles, who also won a bronze with the late Sloane Farrington at the 1956 Olympics in Melbourne, Australia.

“It’s going to be a challenge with so many different classes,” said Dunkley about the way the competition will be spread out. “We have a number of people like Jimmy and Lori (Lowe), who probably will sail in Sunfish as well as the Snipe, so we have to work that out because they will have two race series in each class.”

Strachan, however, said they’ve done it before and with the amount of space in Montagu, they don’t see it being that much of a challenge to accommodate the more than 100 boats at the same time.

He said they are looking forward to having a cultural experience, that has never been seen before on the shoreline, to entertain the crowd.

Gay, representing the government from the regatta desk, said they will provide all of the support needed to make the regatta a success and so they are encouraging all sailors from all forms of sailing to come out and participate in the event.

In response, Knowles said he could clearly remember when he and Cooke crossed the finish line in Tokyo, the words coming from the announcer was “well done Bahamas” and immediately after the race went on shore and called his wife, Holly, who asked if “you won?”

The gold medal, according to Knowles, brought him here today because he competed against many more talented Bahamians, but he was the one who “never gave up.” He encouraged Bahamians to remember the slogan “never give up.” He said his wife remembered it because she knows that he “never gives up.”

As one of his biggest local rivals, Knowles said Jimmy Lowe should be congratulated for following in his footsteps as a great skipper. He also commended all of the others and advised them all to “never give up.” He repeated the words “never give up” because if he didn’t, he would not have accomplished what he did.

Jimmy Lowe said Knowles had a remarkable career and he remembered how in his latest years, he participated in a record eighth Olympics in 1988 in Seoul, Korea.

“To think that he won a gold medal 55 years ago and is still living is remarkable,” Lowe said. “But he was a fierce competitor. He was respected on the race course and he never gave up. He’s been with our involvement in the Bahamas Sailing Association. I could always go to him and get advice and stuff. He’s been there from we started the youth programme about 15 years ago, not only financially, but giving his advice. He’s been a real teacher for us.”

And although they’ve had to share their time with their dad and the sporting community, Randy Knowles said his father was also there for him and his two sisters, Jill and Charlotte. “I think it’s a great idea. When I was growing up, he taught me how to sail, he crewed for me and he was always there for me, trying to better me in the sailing programme in the snipe, laser and star,” he recalled of his father. “He purchased the boats for me, gave me the second hand sails. “All of the honour he gets, he deserves. He’s been an icon for me and a lot of people.”

The younger Knowles said he’s sure his father will appreciate every honour he will receive for the dedication and commitment that he’s made to the sport of sailing all of his life.