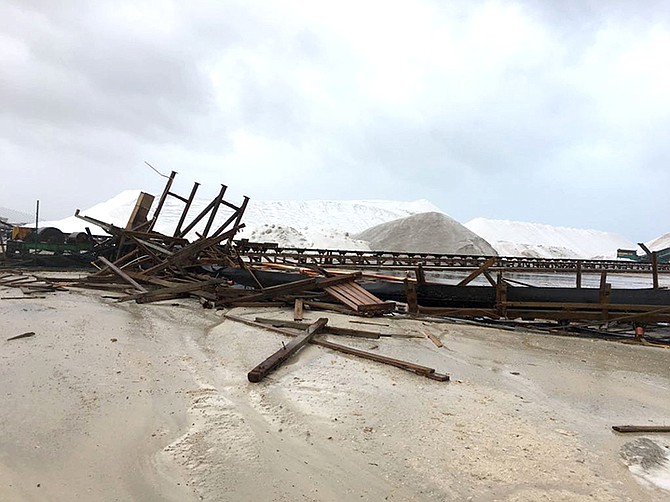 A photo from What's App showing damage to the Morton Salt compound.

AUTHORITIES on the ground in Inagua are working to determine the extent of hurricane damages sustained at the Morton Salt compound.

Island administrator Julita Ingraham in an interview with The Tribune Friday, said preliminary reports from officials on the ground have suggested varying degrees of damage which will need to be addressed.

In a post circulated via What's App this evening, Marine Superintendent Stevie Fawkes, believed to have been posted in Inagua by the RBDF, claimed: "We have millions in dollars damage to Morton Salt."

The post added: "All of the catwalks from Morton Salt terminal are gone, the maintenance shop is severely damaged, all of our salt production stackers were totally destroyed."

The post also suggested that 70 per cent of the homes in Inagua sustained some degree of roof damage; a claim confirmed by Police Superintendent James Moss, contacted by The Tribune this afternoon.

Supt Moss said based on his initial tour of the island this evening, rooves were lost, none more severe than at the Inagua All-Age School.

He told The Tribune: "Several structures, including the school, have lost sections of their roof. The issue at the school is of major concern. Based on what I could see, the administration block and several of the classrooms have sustained extensive roof damage"

He added: "There is some concerns at other places, mainly Morton Salt, but we are unable to clarify what exactly happened or the extent of it."

Dies anyone know if rooves are some version of "hooves".. I mean hoofs? Or maybe it's multiple reeves..I mean reefs

Sounds like Inagua fared well in the face of what could have been. That storm swerved through and around our islands...

Rooves is uncommon but correct.

Seriously?... I double checked and you're right!! I apologize and take my snarky joke back, lol.

THE SALAMI DAT EVAPORATED ALL THE WATER BLEW ALL THE ROOVES OFF???

Morton has made millions and millions of dollars of profits over the years from the exploitation of two of our country's natural resources: Salt and supply of low cost labour. You would have thought they would have been only too eager to arrange (at their cost) for the evacuation our southern brothers and sisters to our safer islands in the north. Instead they did nothing...leaving it for our cash strapped and debt ridden government to carry out an evacuation. Some gratitude....typical greedy foreign corporation that could not care less about our people!

Morton Inagua salt operations have changed hands many times in the past 2 decades ........ Find out who actually owns the salt plant operations at this time Morton is only the brand name for commercial trading purposes at this time