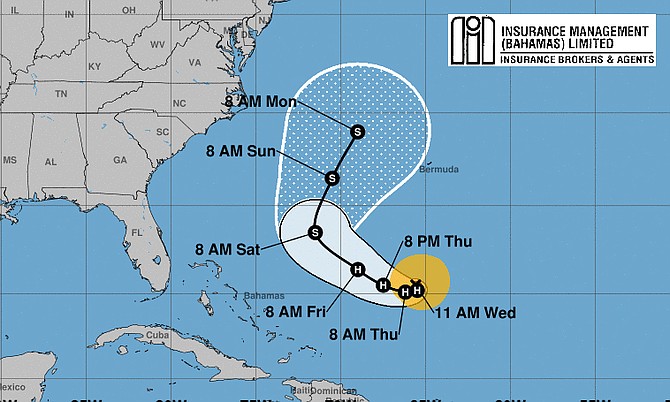 FORECASTERS are keeping a “close watch” on Hurricane Jose which could pose a threat to the eastern Bahamas late this week, according to AccuWeather Meteorologist Dan Kottlowski.

Mr Kottlowski said there are several paths Jose can take this weekend and over the following days. How close Jose passes to the Turks and Caicos and eastern Bahamas late this week will determine whether its outer bands of rain and wind impact these areas.

Jose, currently a category one hurricane, is churning hundreds of miles northeast of the Turks and Caicos and is expected to maintain hurricane status through the week.

“Jose could remain at sea and pose no direct threat to land. Other possibilities include direct impacts to the mid-Atlantic, New England or Atlantic Canada,” he said.

“Anyone from Bermuda to The Bahamas, US East Coast and Atlantic Canada should continue to monitor the system.”

In a statement, the Department of Meteorology in the Bahamas said the US National Hurricane Centre is advising that based on its latest models, when Hurricane Jose completes it loop on Friday, it will be pointed more towards the Carolinas and Virginia, USA.

However the Met Department said local officials will continue to monitor Jose as the hurricane is “still too close to The Bahamas.”

“The centre of the storm was located about 435 miles north-northeast of Grand Turk Island. It is moving towards the east near six mph and this motion is expected to continue (Tuesday), a turn towards the southeast is expected followed by a turn towards the southwest by Wednesday. Maximum sustained winds have decreased to near 75mph with higher gusts. Some additional weakening is possible during the next day or so and Jose could weaken to a tropical storm later today.”

There are no coastal watches or warnings in effect for Jose.

Jose is the fourth threatening hurricane to form over the Atlantic in the past few weeks.

Hurricane Harvey unleashed extensive damage in southern Texas and parts of Louisiana as it brought excessive rainfall and catastrophic flooding, killing at least 74 people. Katia killed at least two people in Mexico after it made landfall last week – right after a powerful earthquake killed 64 others, according to CNN.

Six deaths in Florida have been blamed on Hurricane Irma so far, along with three in Georgia and one in South Carolina and at least 38 people were killed in the Caribbean.