Updated: We May Have A Problem With Maria 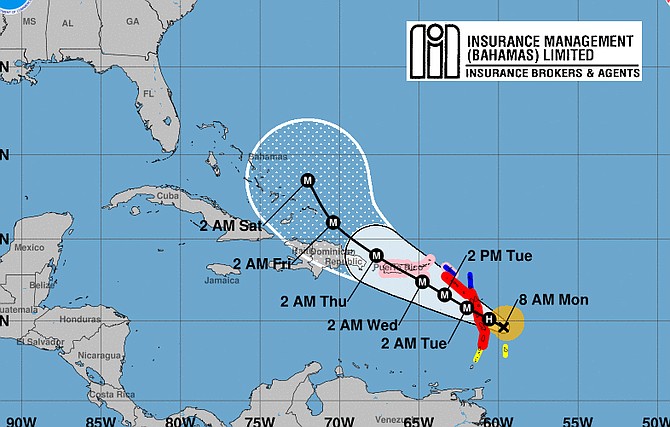 WEATHER forecasters yesterday warned of the potential dangers of Tropical Storm Maria, advising that in the “worst case scenario,” the system could turn out to be a “major hurricane” expected to hit the southern Bahama islands by the weekend.

Dave Samuhel, senior meteorologist for Accuweather.com, said while Tropical Storm Maria isn’t expected to hit the southern islands until Friday or so, its impact on islands in that region “could be severe”.

He said Accuweather currently forecasts Maria will strengthen into a category two or three storm, however, he said that prediction may very well change.

Nonetheless, Mr Samuhel said the Bahamas should not receive any impact from Tropical Storm Maria immediately, although noting that waves from Hurricane Jose – passing near the US East Coast - will continue to affect both the northern and southern Bahamas, with the north facing shores also to experience “some large surf” as a result.

He said the other system forecasters are tracking, Tropical Storm Lee, is “weakening” and will be a “non-factor.”

According to an Accuweather.com report, Tropical Storm Maria continues to strengthen as it makes it way west-northwestward. Conditions are conducive for the storm to strengthen into a category two hurricane prior to reaching the Lesser Antilles on Monday night and Tuesday, the report said.

By midweek, the storm is expected to reach category three intensity, when it is expected that the storm would affect much of Puerto Rico and the Virgin Islands with severe rain and wind.

Based on the storm’s projected path, Mr Samuhel said he expects that by Friday, Tropical Storm Maria will hit Inagua and the Turks and Caicos Islands.

“We’re looking at Maria to cross the northern Caribbean Tuesday and Wednesday, and the impacts will really be determined by how much of those islands it goes over,” Mr Samuhel told The Tribune on Sunday. “Say does it go right over Puerto Rico and Hispaniola, and if so it will be a much weaker hurricane as it passes by those islands, so that would be I guess good news for you.

“If it stays just north of those islands it will retain more intensity, but regardless of what happens there your impacts are probably not until Friday or next weekend when you’ll start to see some tropical storm or hurricane conditions in the southern Bahamas.

“It would first approach Great Inagua being the southernmost island there and then the Turks and Caicos,” he added. “That’s where we could start to see impacts by Friday or so.”

When asked by The Tribune about forecasted severity of the storm by the time it hits, he said: “It could be severe. The worst-case scenario is it’s a major hurricane coming into the southern Bahamas Friday or next weekend.”

“Our forecast right now is for a category two, but it’s likely going to change as to what happens,” he added.

Tropical Storm Maria is the third system to affect the region in recent weeks, following the passages of Hurricanes Irma and Jose earlier this month.

Maria has prompted a hurricane warning for Guadeloupe and Dominica and a hurricane watch for Antigua, Barbuda, St Kitts, Nevis, Montserrat, Saba, St Eustatius, St Maarten, St Martin, St Barthelemy and Anguilla - many of which were devastated when Irma struck and killed 44 people in the Caribbean, according to CNN.

When this Cat3 storm passes through the SE Bahamas again ........ will Minnis evacuate these islands again?????? ........... especially after the debacle of the past few days at the church with the ignorant Acklins people???????

No, it's not a matter of evacuating for every hurricane. You set a threshold above which you believe it would be too dangerous for people to stay in place. To their credit I believe Dr Minnis has already indicated that. For a cat 3 they can remain where they are unless all of the shelters on the island have been compromised.

Of course there's no evacuation for Freeport or Nassau unfortunately. The best you can do is identify the most at risk communities and move them elsewhere on island. In a cat 5, "most" at risk might be a moot point.

Only a foolish government would continue encouraging settlements on our most southern islands, i.e. Aklins, Inagua, Mayaguana, Crooked Island, etc. Continuing to redevelop and rebuild the infrastructure of these very hurricane prone islands after each and every major hurricane is the absolute height of lunacy. The insanity here is only matched by Minnis and KP reinstating our country's participation with other Caribbean nations in a regional hurricane insurance policy, the terms of which have us paying an exorbitant premium in relation to the maximum claim benefit we could ever expect to receive. And only after paying the premium does Minnis and KP come to their senses and then seek to renegotiate the terms of the hurricane insurance policy with the insurer and other participating Caribbean countries. Minnis and KP are proving themselves to be real dunces!

Is one third of the country or only 5000 citizens? You can't have it both ways depending on which hyperbolic argument you are making. If foolish people want to rebuild their homes every year or two, let them. The government (you and I) should not pay for this.

No one said anything about Long Island!

All of the Bahamas are hurricane prone. It is the turn of the southeast this year. It goes without saying that insurance premiums for whole countries would be high. Negotiating sensible terms is something that we should expect of the P.M. and his Deputy. Somehow I don't believe the Government is in the position to self-insure at this point in time. Funds from a National Lottery could find their way into an insurance fund. We still seem to be keeping awfully quite on the numbers racket.

Not abandonment, but rather re-designation as low cost preservation areas (National Parks) to be managed by The Bahamas National Trust with the financial help of highly reputable worldwide conservation and preservation organizations.

Nassau should be abandoned ........ it is a criminal shit-hole