Maria Ramps Up To Reach Category 5 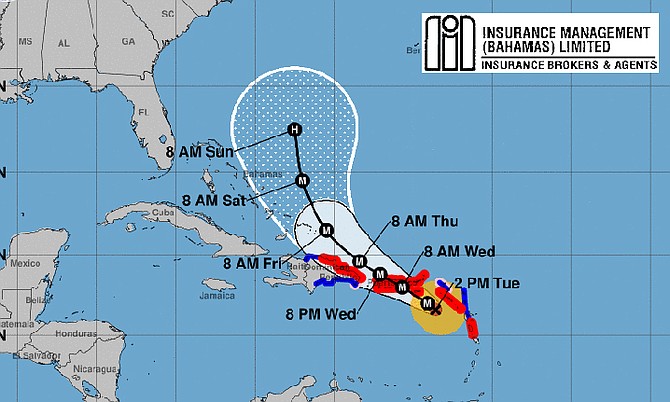 HURRICANE Maria grew into a category five storm as it barreled toward islands in the eastern Caribbean yesterday with forecasters warning it was likely to grow even stronger before it impacts the Bahamas late Friday.

In an interview with The Tribune, AccuWeather meteorologist Dan Kottlowski said according to the current models, Maria’s centre will move just to the east of the Bahamas causing tropical storm force winds and rain.

Mr Kottlowski said Bahamians should not let their guard down despite the current forecast because “these things change by the minute.”

On Monday afternoon, Maria was hurling winds of 125 mph as it closed in on the Caribbean and took aim at Puerto Rico.

That’s nearly twice the hurricane’s strength from just 24 hours earlier and Maria is expected to keep growing before slamming into the Leeward Islands Monday evening.

“Right now, as it stands, the latest computer information keeps the centre just to the east of the Bahamas but again when you are in a situation like this I do not want people to let their guard down because when there is land interaction, it can have a major impact on the storm’s future track,” Mr Kottlowski said.

“So right now, the Bahamas is forecast to get the western fringes of the storm and the west side is the better side. The information suggests the storm will move close to the Turks and Caicos head northwest and track east of the Bahamas and if the current forecast information is correct the Bahamas will stay on the far west side which just means winds and showers and rough seas. I do want to say that people should not let their guard down because we are not sure what will happen on any given day.”

According to Accuweather, on Monday night the storm was projected to cut across the islands of Dominica, Martinique, French Guadeloupe and St Lucia, where hurricane warnings are in effect. It will also come close to and affect St Kitts, Nevis, and Montserrat, also under hurricane warnings, but perhaps positioned far enough north of the storm to miss its brunt.

The worst part of the storm is also likely to pass a good deal south of beleaguered Barbuda and Antigua, reeling from Hurricane Irma, but the two-island nation may still get brushed by some strong wind gusts and heavy showers.

On Tuesday, Maria is forecast to pass through a patch of the Caribbean free of islands before potentially closing in on St Croix, now under a hurricane warning, late in the day or at night. This island was one of the few US Virgin Islands that was spared Irma’s wrath, but may well get hammered by Maria, according to CNN.com.

By Thursday, the storm is likely to pass very close to or directly affect Puerto Rico from southeast to northwest. A hurricane has not made landfall in Puerto Rico since Georges in 1998.

On Friday, the hurricane may come close to the Turks and Caicos and southeast Bahamas, parts of which were ravaged by Irma. Beyond that point, Maria’s path becomes more uncertain, according to accuweather.com.

Some models suggest it could find an escape route out to sea, remaining offshore from the US East Coast, but it is way too early to sound the all-clear.