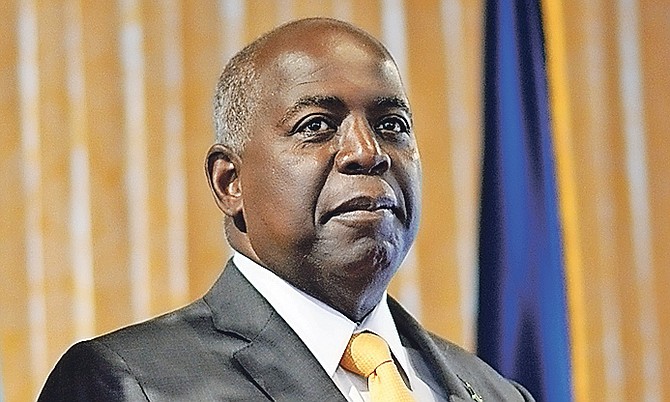 DAVIS & Co, the law firm headed by Progressive Liberal Party Leader Philip “Brave” Davis, yesterday disputed an “exorbitant” bill of $22,603.33 from the Water and Sewerage Corporation insisting there has been a long and continued attempt to determine accurate billing of their account from the water provider.

The law firm called the report that it owned more than $20,000 “foolishness”.Meanwhile, in a personal statement, Mr Davis “categorically denied” owing the corporation $2,334.21 for his Westridge residence, saying he knew nothing of such a debt with the water provider. While Mr Davis maintains he currently has no personal balance at WSC, The Tribune’s reporting showed – according to the government entity – he owed the amount as of April 5, when an $800 payment was made.

Both accounts were a part of a “confidential list” at the corporation, obtained exclusively by The Tribune, which allowed politicians and elites to accumulate arrears and not be disconnected.

Former Prime Minister Perry Christie topped the list with one of two accounts in his name owing more than $20,000 as of July 2014.

The balance attributed to Davis & Co was the second largest amount – as of March 31 of this year when a payment of $5,000 was made.

“The facts are very simple and could have been verified by us or independently with the management of Water & Sewerage,” Davis & Co said in a statement.

“There exists a genuine commercial dispute with regards to the exorbitant bills charged to Davis & Co. The firm has written several times to the corporation and its lawyers with regards to the matter and in fact there have been several meetings with all parties with the intent of agreeing what is rightfully owed.

“The letters are there and can be easily verified. The technocrats and professionals can confirm a long and continued attempt to get an accurate billing of the account. They can also confirm considerable amounts paid despite other queries over the past few years.

“The fact that the matter remains under dispute, has involved the corporation’s attorneys and has still not yet been resolved is very clear evidence that no special treatment or consideration was ever given to Davis & Co,” the firm also said.

“In fact, we assumed a significant portion of a bill even though we thought that particular bill was inaccurate. We have been waiting for Water & Sewerage to reply to our latest written request for a fair and proper adjustment for several months. It appears that some at the corporation are more interested in political stories than commercial resolution. Perhaps now they will take this opportunity to provide us with a reply to our request.

Davis & Co added: “In fact, just several weeks ago we also received an inquiry with regards to a significant bill for a building on Victoria Avenue which the firm has not occupied since 2005, at which time all bills were paid in full. Since that time, it has been occupied by the family of a very senior former FNM politician.”

For his part, Mr Davis insisted the exposure of his personal WSC account information was a part of a “dangerous and vexatious political exercise” by the government.

He said: “I categorically deny the statements published by The Tribune this morning that suggest that a water bill allegedly for my residence indicates there is an outstanding amount due.

“I know nothing of such a debt with the corporation.

“Indeed, this article is a nothing but a continuation of what has become a dangerous and vexatious political exercise by those opposite who fail to gather the true facts, while perpetuating a continued breach of confidentiality against citizens.

“I can produce a full payment for my residence that was made earlier this month,” Mr Davis also said.

Members of the Free National Movement are also on the confidential list, however on average they did not have high balances.

For instance, former Deputy Prime Minister Frank Watson owed nearly $900 as of April 18. Former Prime Minister Hubert Ingraham is also on the list, with a balance of $576.63 in April for an address in Cooper’s Town, Abaco.

Former Minister of Works Neko Grant had a negative balance of $46.60 as of April, suggesting he was owed money by WSC. Minister of Immigration Brent Symonette did not owe any money, and Attorney General Carl Bethel owed less than $200, among others.

In a statement released last night, WSC said it was “disappointed” to see The Tribune’s report detailing the “alleged outstanding bills of its customers.” The corporation said it takes client privacy seriously, adding those responsible for the “illegal” leak of private records to the media will be dealt with “severely” once found.

Last week, WSC Corporation Chairman Adrian Gibson confirmed the existence of a special list populated by scores of elites at the government owned utility provider as he pledged to initiate a crackdown on delinquent accounts.

The Tribune understands WSC has written to persons holding these delinquent accounts giving them 14 days to pay their debts or arrange a suitable payment plan or face disconnection.

This revelation comes after The Tribune reported last week about a similar list at Bahamas Power and Light. Persons in this category owed the cash-strapped electricity provider thousands of dollars, with many owing more than $10,000.

Typical Davis - his way of not paying his law firm's water bill is to say it was disputed. How many of us have tried to do that very same thing and had our water cut off for non-payment?!!

Comrades!..According to three recent surveys conducted by the polling firm of Hook, Line & Sinker, it took but three seconds for 93.75% the surveys respondents to digest the question and to offer their opinions based on the question of, How badly politicians across the political spectrum's bill paying history is with the government. *{ The results of these surveys are accurate at the 95% confidence level plus or minus 3 percentage points }*

Its very simple. Get rid of the list so that everyone has to pay there bill or they get cut off. Surely they have been sent a notice of arrears and if not they should have been. Probably lost in the great postal system.

That amount of money made no sense. It is an office they would not have paid a bill in many years operate a laundry mat or have leaks. it also made no sense if they were Paying less than $100.00 on such a huge bill. What they should do is sue. They paid their power which would have been more but not their water?. these fellows should be careful. because common sense is not common. and being spiteful just may backfire.

Here is another jackass who does not know a leaky tiolet will result in high water bills.What a pathetic bunch of criminals.

When Davis can produce verifiable WSC receipts ............ then believe this lying, theiving crook The country has caught him in too many lies ........ and too much unaccounted public money under his portfolio to believe him anymore ......... and that goes for the majority of the political elite (The No-Pay List Crew)

Davis is a bald-faced liar of the highest order! I remember him standing in parliament and saying without any hesitation whatsoever that the building destroyed by the Bamsi fire was insured. Come to find out there was no insurance.