Ramsey Back In Court Over Payments On Bribery Fine 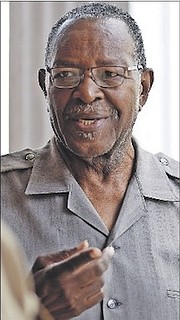 FREDDIE Solomon Ramsey is due to re-appear before a Supreme Court judge in a week's time in connection with the judge's orders last year for him to repay more than $200,000 to the Bahamas Electricity Corporation stemming from the Alstom SA/BEC bribery scandal, The Tribune understands.

Court officials confirmed to The Tribune yesterday that the former insurance executive will appear before Justice Bernard Turner on October 5 in connection with that judge's orders that BEC be repaid the entire $221,457.81 he allegedly received from French company Alstom SA.

In July 2016, Justice Turner imposed a $14,000 fine on Ramsey as opposed to a prison sentence in connection with evidence alleging that Alstom SA paid more than $300,000 to a BEC board member to influence the awarding of the New Providence Phase Two and Three contracts between 1999 and 2003.

Justice Turner said Ramsey had two months to pay off the fine or face six months in prison.

In addition to the fine, the judge said he saw no reason why he should not order the entire $221,457.81 Ramsey allegedly received from Alstom as a result of the scandal be repaid, which he said should be paid to BEC or any successor of BEC within nine months.

Failure to pay off the amount within that time, Justice Turner said, would result in that sum being applied to Ramsey's real property tax and/or him facing a separate term of six months' imprisonment.

Justice Turner also said that sum should be paid to the country's consolidated fund should BEC no longer be considered a public body.

The 18 charges against Ramsey - four of conspiracy to commit bribery and 14 of bribery - concerned the New Providence Expansion Phase Two and Three contracts.

It is alleged that Ramsey, being concerned with others, did conspire to "solicit, or accept any advantages as an inducement to, or reward for, or used influence in procuring" for ABB Generacion and Alstom SA in the New Providence Expansion Phase Two contract with BEC between 1999 and 2003.