Can You Pointe Out The Local Workers? 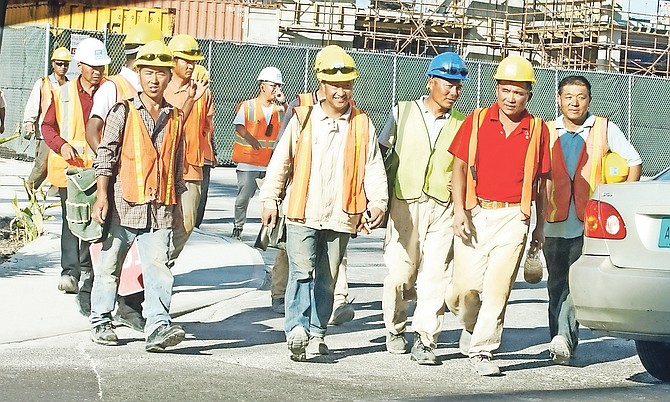 A TRIBUNE investigation into the $200 million development of The Pointe in downtown Nassau has raised questions of a possible breach in the terms under which the project should be carried out.

Dozens of Chinese construction workers pour on to the site daily but the Bahamians who should be working alongside them are virtually nowhere to be seen.

On Friday our photographers monitored who went on to the site and with the exception of three or four Bahamians and a guard at the gates of the development, everyone else appeared to be Chinese.

Under the terms of the heads of agreement signed with the project’s developers - China Construction America (CCA) - 70 per cent of the workforce is supposed to be Bahamian and at the “peak” of construction that number should be about 200 people.

When The Tribune looked at the workers on the site in both January and February it was a similar story. Dozens of Chinese builders walked on to the site every day from accommodation opposite the development and virtually no Bahamians anywhere to be seen.

When contacted yesterday, Labour Director Robert Farquharson told this newspaper his office had received “no complaints” about the make-up of the workforce.

However, he admitted the last inspection carried out at The Pointe was last year, before the May general election, when he said the ratio of Bahamian to Chinese workers was “in accordance” with the original heads of agreement.

Mr Farquharson admitted he could not say what the ratio of Bahamian to non-Bahamian workers now is.

Minister of Financial Services, Trade and Industry and Immigration Brent Symonette also could not confirm the ratio of workers when contacted last night.

“The heads of agreement was 70/30 (Bahamian workers to foreign), not sure if they are compliant with that, but we’ll find out,” Mr Symonette told The Tribune.

For his part, if complaints are lodged with the Department of Labour, Mr Farquharson said it will “take steps to confirm that the terms of the heads of agreement are complied with.”

The heads of agreement for the project, tabled in Parliament in 2017, granted China Construction America between 400-500 work permits for the $200m development.

The deal, dated June 18, 2015, stipulated that Bahamians would comprise 70 per cent of the total construction workforce, once those employed by local sub-contractors were included in the calculation.

And Bahamian sub-contractors were supposed to receive “approximately 40 per cent of development work…in various classifications,” although those were not listed.

However, the document stated the parties “may, through mutual agreement, vary their employment ratio if it becomes necessary for earlier completion.”

The 70 per cent Bahamian labour component was thus subject to alteration, but based on the 400-500 Chinese work permits, that implied around 800-1,000 construction jobs for Bahamians.

The document also committed CCA to “make every effort to fill as many jobs as possible with Bahamian citizens.” However, it then added: “The government recognises, however, that due to the development of the proposed high-rise structures and the tight schedule to complete the development, non-Bahamian labour with special skills and expertise that are not readily available in the Bahamas will be required.”

At the time, Bahamian Contractors Association (BCA) President Leonard Sands also demanded the government and developer clarify how many Bahamian companies and labourers were employed on Phase II of The Pointe.

When questioned on the matter yesterday, Mr Farquharson said: “I can’t say what it is now, but the last time the Department of Labour conducted a survey, and that would have been I think before the May general election.

“We conducted a survey, an inspection at The Pointe, and we confirmed that the ratio of Bahamian to Chinese workers was in accordance with the heads of agreement. And I think that is 70 (per cent) Bahamian and 30 per cent non-Bahamian.

“… I can’t say what it is now. If there are concerns, I’m sure the Department of Labour will take steps to confirm that the terms of the heads of agreement are complied with.”

Prime Minister Dr Hubert Minnis recently took Cabinet colleagues on a visit to The Pointe to check on its progress.

“The labour component, we have had discussions on that,” Dr Minnis said after touring the development in February. “We came to an agreement that the labour component can be no less than 70 per cent Bahamian and 30 per cent foreign nationals and they have stuck to that commitment of 70/30.”

At the time of that visit, the president of The Pointe, Daniel Liu said at the current phase of the project, 58 Bahamians were involved and that CCA was keeping to its promise of a 70/30 labour split in favour of local workers.

Mr Liu added a total of 150 Bahamians contractors had been involved since The Pointe project began.

CCA AGAIN. You would have to smell a rat. Along similar lines, what is the deal with Chinese working room cleaners, waiters, cooks, maintenance, etc. jobs at Baha Mar? With so many from New Providence and the Family Islands out of work, what gives? It appears we have given away a lot more than our land and our environment.

Is there a prize to spot the bahamian worker?

Ma Comrade, I've asked the PMO to clarify if any member Imperial red cabinet, upper red chamber or sitting MP among the reds 39 members - just happens hold dual citizenship, or a passport other than issued under seal colony Bahamaland's?

Do you actually think the "Labour Department" cares?

Most amusing is that Mr. Symonette, who is in charge of Immigration and the issuing of work permits to the Chinese workers, is "not sure" if they are in compliance with that (the 70/30 ratio). Surely some evidence has to be presented verifying the compliance prior to issuing of permits. What a jokey situation.

Bahamians need to ask themselves the question " who does Mr. Symonette represent in Parliament "?

No one should be surprised at Brent Symonette not caring.

Can i get a job in govt where i can sit on my butt and wait for complaints?????.....especially knowing nobody is going to actually officially file one because they dont want their phone and light turned off.

Ma Comrades, we have yet get official head count detailing how many of the bankrupted Baha Mar Chinese workers - never received their exit stamps from Bahamaland's immigration.... in fact several hundred were reportedly simply bused over with no prior immigration work permit job site work reassignments} to begin work at The Point... is it possible both Brent and Dion done knows if its possible some in story's photo could be work permit worker holdovers from the bankrupt Baha Mar days... be an excellent investigative story Tribune dig into da faces... since we done knows some them work permit workers from bankrupt Baha Mar days - has young Bahamaland borns children's enrolled in our public schools? {Nope, no making this stuff up that the head count could number in the 1000 warm bodies range }.

...could it be Bahamian workers not seen because dey already on the job site working??..lunch time??....camera shy?....busy working ....no time to take group photos??.....executive management positions in air conditioned offices?..?.. Where are the govt inspectors? Safety Inspectors? ........

These guys are in the sun. Want to see the Bahamian workers? They are in the shade. And have been since 7am.

I guess nobody could complain if no Bahamian workers are there to even notice they in the very low or non-existing minority and clearly the couple what there so busy trying to hold down a job they not raising the issue. The Bahamas is a joke, that's why the foreign investors love us (case in point - OBAN).

No AC out there---Bahamians got to be in the office!

No Complaints - no nukes - fluk it's lets stick with our MO and do Nothing..... What is it with our gubmints no matter what colour shirt they don't GAF about anything but themselves once elected....

"When contacted yesterday, Labour Director Robert Farquharson told this newspaper his office had received “no complaints” about the make-up of the workforce. However, he admitted the last inspection carried out at The Pointe was last year, before the May general election, when he said the ratio of Bahamian to Chinese workers was “in accordance” with the original heads of agreement."

Hehe, If not why not? Let's wait for the robbers to tell us the date and time of the next heist too. Lol

Next up on the agenda: "Commercial Enterprises Bill will train Bahamians and lead to high paying jobs in the inner city"

This stinks. Put our people to work. This is just so wrong.

Ma Comrades, the "Chinese Model" has manged outlive the former PLP government. How can anyone fault those many thousands speaking out to call out the 2017 general election contesting red shirts for the outright way they charmed 91,409 voters by telling them what the 91,409 voters - now know have been nothing but stacks damn red lies... jobs for who?

Maybe our people needs to try and own something ourselves for a chance... but what we do is we let foreigners come in and set up shop... call if FDI, then when we not happy with their operations we cry fowl, maybe its time to put up. Its always a way to fix it, and not thru politics. Voting will not change one thing, but sides seems to have weaknesses and none will please everybody My mother always taught us to get ya own, don't wait for someone to give you something.

Ma Comrades, isn't the department of labour a tenant at the Le Pointe?

Looks as if the chicoms continue to make signifigant inroads.

The Bahamian workers all "sneak out" at lunch time

Minnis and Symonette should both be hog tied and whipped in public. The sad reality is that the Red Chinese have always considered black people to be the bottom rung on the ladder of humanity. They quite literally laugh at us as being much inferior to themselves. They have done the same all over the African continent and are now doing likewise throughout Central America and the Caribbean. They regard us as dumb and easily exploitable by way of the corrupt populist politicians we generally elect.

There are more questions than answers on this $200 million development of The Pointe in downtown Nassau!

This disproportionate Bahamian employment issue is just the tip of the iceberg of problems to come when this facility is completed and Bahamians realize that Chinese will be enjoying the majority of spending from tourism in our country, with no Bahamians in sight!

Has anyone figured out that the entire purpose of this development is to create a huge entertainment center targeting cruise ship passengers?

The Chinese will own and operate the single largest resort activities "fun location" in the Bahamas at the Point. Bahamians will not be able to participate and will NEVER be able to compete for cruise ship spend after the Point opens.

We can thank the dancing jackass for taking this concept which was originally proposed to the PLP in 2012 by a well-financed Bahamian group for an Arawak Cay development, and selling us out to the Chinese.