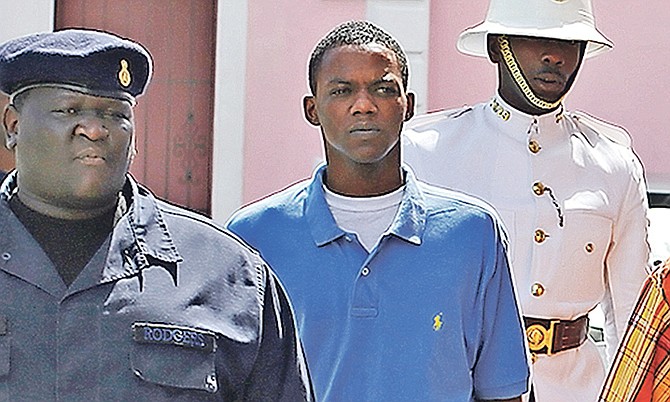 THE man convicted of the October 2014 home invasion and consequent shooting death of Blair Estates resident Andre Cartwright was sentenced to nearly 50 years in prison yesterday by a Supreme Court judge.

Justice Renae McKay sentenced Tiano D’Haiti, 26, to 49 years in prison for the October 28, 2014 home invasion and murder. He was further sentenced to 25 years for attempted armed robbery, and another 20 for burglary, all to run concurrently.

However, after factoring in the amount of time D’Haiti spent on remand – two years, 10 months and 17 days – Justice McKay said D’Haiti will effectively serve 46 years, one month and 13 days in prison.

The sentences are to run from the date of his conviction, September 25, 2017.

Justice McKay said in sentencing the Thompson Lane resident, she took into consideration his youth, and, in adopting the words of his attorney Jairam Mangra during his plea of mitigation, that there is no evidence D’Haiti is beyond redemption and/or rehabilitation.

However, the judge said the sentence imposed must be sufficient enough to express society’s abhorrence of such criminal acts and should serve as a method of deterrence.

On September 25 of last year, a Supreme Court jury found D’Haiti unanimously guilty of the murder, attempted armed robbery and burglary charges he was faced with.

D’Haiti had previously stood trial along with Kevin Andrews as the two accused in connection with Andre Cartwright’s death, both having been initially arraigned on November 11, 2014.

However, Andrews was acquitted by the jury on the instructions of Justice McKay after hearing submissions from lawyers for the accused and the Crown.

According to initial police reports, Cartwright, 44, was at his Blair Estates home around 1.40am with his mother, Emma Cartwright, and father, Glenn Cartwright, when men kicked in the front door of the house.

When he heard the noise, Cartwright got his licensed shotgun and went to investigate, police reported. He encountered the three suspects, one of whom was armed with a handgun.

There was a brief exchange of gunfire, which resulted in Cartwright being shot multiple times. He died at the scene. One of the suspects was also shot, however, he and the other men escaped in a silver coloured Honda Accord.

During trial, Mrs Cartwright testified how the home invaders feigned being members of the Royal Bahamas Police Force (RBPF) in their attempts to burglarise her eastern New Providence home the night her son was killed.

She said she heard shouts of “police, police” from the other side of her home’s interior door, which was being bashed in, just seconds after her son Andre, in a loud voice, commanded: “Stop! I have a gun.”

Mr Cartwright, meanwhile in an emotional testimony that invoked sobs from family and friends of the deceased in the courtroom, described how shortly after 1am he was awakened by loud “banging” and “crashing” noises coming from the direction of his home’s front door.

He said he ultimately made it out of his bedroom when he noticed the inner door was being pushed in. According to Mr Cartwright, the inner door separates the bedrooms from the rest of the house. He said he always locks that door before retiring for the night.

Mr Cartwright said he heard a brief exchange of gunfire, and eventually came out of the bedroom to see his son Andre stumbling backwards into one of the doorways on their side of the inner door. He said he noticed that his son was in “distress” and holding his chest.

Mr Cartwright said he subsequently tried to resuscitate his son, but he had already died.

Mr Cartwright said he sat on the bathroom floor with his dead son in his lap for an unknown amount of time, before going out the front door, falling on the grass and sobbing until his son’s body was taken away.

A police officer also testified during trial how D’Haiti presented himself to the Accident and Emergency Room at the Princess Margaret Hospital suffering from an injury shortly after the incident in question occurred.

The officer said he did not actually see the wound because D’Haiti had his hand covering the injury, which he claimed was on the left lower side of D’Haiti’s torso.

Nonetheless, he said D’Haiti was rushed inside by nurses and taken to the emergency room. Dr Dervin Kemp, a senior house officer at PMH, later told the court that upon examining D’Haiti in October 2014, the convict was found to have sustained a gunshot wound to his left lateral chest.

The female driver turned out to be Shecoya Davis, who, during trial, said she never would have taken D’Haiti to the hospital had she known the gravity of the matter he would later be convicted of.

“If I had known, I would’ve never, ever even drove my car to the hospital with him,” she told the court.

Meanwhile, Police Detective Sergeant Sherwin Braynen testified D’Haiti told him while he was one of five men who visited Cartwright’s home on October 28, 2014, he stayed in the car while the other four, inclusive of Andrews, forced their way into the Cartwright residence.

According to Det Sgt Braynen, who was attached to the homicide division of the Central Detective Unit (CDU) at the time of the incident, D’Haiti made his statements on October 31, 2014 while in PMH suffering from a gunshot wound.

The officer said D’Haiti told him thAndrews, along with Andrews’ younger brother and two other men picked him up in a white Astro van on October 28, 2014 and drove around for a while before arriving in the Blair Estates area sometime after 1am.

At the time of their arrival in Blair, D’Haiti said he was driving the vehicle, according to Det Sgt Braynen. Upon arriving in the area, D’Haiti said he parked the van near a wall while the other suspects proceeded on foot to the Cartwrights’ residence.

Det Sgt Braynen said D’Haiti told him he only went into the house after he heard the sound of gunshots. Upon entering, D’Haiti allegedly saw Andrews and his younger brother before proceeding towards the home’s inner door, which separates the bedrooms from the rest of the house.

The officer said upon arriving at the inner door, D’Haiti heard another shot ring out, prompting him and the others to flee the residence.

It was then that D’Haiti said he realised he was shot, Det Sgt Braynen claimed. The officer said he was told the van sped off and ultimately ended up at the residence of Andrew’s girlfriend, whose roommate then drove D’Haiti to PMH.

However, Crown prosecutor Kendra Kelly, assisted by Destiny McKinney, referred to D’Haiti’s confession to Sgt Braynen as his attempt to “minimise” his involvement in the matter.

Ms Kelly further pointed out the significance of the circumstances behind D’Haiti’s attempted armed robbery charge, charging that Cartwright shooting his gun in defence and wounding D’Haiti likely foiled what could have been an armed robbery.

“If he had not been shot, he might have gotten away with it,” she said at the time.