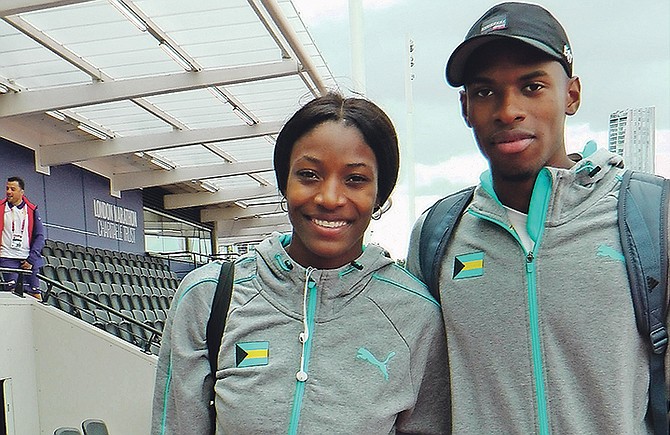 THE Bahamian track and field twin towers of Shaunae Miller-Uibo and Steven Gardiner are tentatively set to continue their impressive seasons at the 2018 Shanghai Diamond League next month.

The respective 6-foot, 2-inch and 6-1 dynamic duo, under the management of On Track Management in Florida, are scheduled to be among a list of 14 world and Olympic champions who will appear on the second meet of the Diamond League on Saturday, May 12, in Shanghai, China.

The International Amateur Athletic Federation announced their participation as the Diamond League continues following the Commonwealth Games that was held last week in the Gold Coast, Australia.

It’s the second of the Diamond League meetings, following the opener on May 4 in Doha, Qatar, and the third of the 12 series of meets at the Prefontaine Classic in Eugene, Oregon, May 25-26. The series will culminate with the finals in Zurich on August 30 and Brussels on August 31.

Miller-Uibo, who celebrated her 24th birthday on the close of the Commonwealth Games on April 15, will face her second match-up against a gold medallist after she outduelled Jamaica’s 2016 Olympic double sprint champion Elaine Thompson twice en route to winning the gold in the women’s 200m in a record-breaking performance in the Gold Coast.

Clocking 22.09 seconds, Miller-Uibo eclipsed the previous games’ record of 22.20 that was set by fellow Bahamian ‘Golden Girl’ Debbie Ferguson-McKenzie when she dominated the sprints in 2002 in Manchester, England, by adding the century title and helping the Bahamas cart off the 4 x 100m crown as well.

Miller-Uibo, the Olympic 400m champion and national record holder at 21.88, will be back for another 200m showdown in Shanghai when she is slated to face Dutchwoman Dafne Schippers in a re-match of last year’s IAAF World Championships in London, England.

At the championships, Miller-Uibo was attempting to pull off the rare 200/400m double. But after slipping from the gold medal to fourth place in a bizarre finish in the one-lap race, Miller-Uibo rebounded two days later to clinch the bronze in the half-lap race.

Schippers, 25, repeated as the champion of the hotly contested race. She holds the Netherlands and European area record at 21.63, established in 2015, placing her at number three on the all-time list of performers with Miller-Uibo at No.21.

Gardiner, meantime, is scheduled to go back to the men’s 400m where he will face Botswana’s Diamond League champion Isaak Makwala after they missed out on a clash at the World Championships.

Gardiner, 22, went on to win the silver medal in London behind world record holder Wayde van Niekerk after he became the first Bahamian to break the 44-second barrier lowering his national record to 43.89 seconds in the semifinal, which now ranks him number 13 on the all-time list.

The 31-year-old Makwala, known for doing his trademark push-ups and saluting to the crowd after he finish running, had to withdrew because of illness in London. He had to subsequently prove his fitness by running by himself in the 200m to earn a spot in the final where he was sixth.

To close out the year at the IAAF Grand Prix Final, the two faced each other in the 400m. But at the start of the race, Gardiner fell down coming out of the blocks as Makwala surged to victory in 43.95.

The two were scheduled to clash ‘Down Under’ for the Commonwealth Games, but Abaco native Gardiner stayed in Florida where he made history again at the Hurricane Alumni Invitational on April 7, becoming the first Bahamian again to dip under the 20-second barrier in 19.75, shattering the previous record of 20.16 that was held by Michael Mathieu.

In Gardiner’s absence, Makwala, 31, went on to easily take the men’s 400m title in the Gold Coast and he anchored Botswana men’s 4 x 400m relay team to the gold, holding of a stiff challenge from Grand Bahamian Alonzo Russell as the Bahamas had to settle for the silver.

On Track Management’s Chief Executive Officer Claude Bryant said they are looking forward to the Bahamian dynamic duo to have another fantastic year.

Bryant noted that if Gardiner gets his travel papers sorted out in the United States, which prevented him from participating at the Commonwealth Games, he will definitely compete in Shanghai. He confirmed that Miller-Uibo is certainly set to go.

He said Miller-Uibo is currently in “full recovery training then competition,” following a slight injury that she sustained in the Gold Coast after her victory in the 200m, which prevented her from competing on the women’s 4 x 100m relay team that had to withdraw just before the start.

“Consistency coupled with continued improvement,” was what he’s projecting for the former St Augustine’s College and University of Georgia competitor.

“As always, she will not be over raced and yes, she will be doing the 400ms.”

Gardiner, according to Bryant, is “currently in training and looking forward to the Diamond League circuit,” but he declined to put “limits (times) on Mr Gardiner is risky, such is his talent.”

However, Bryant said “just as with Mrs Miller-Uibo, we take a cautious approach so the norm in his racing schedule will hold sway” for the former Moores Island High School star, who made his debut on the scene as a 200m specialist under coach Anthony Williams.