2020 Vision To Ban Plastics And Styrofoam 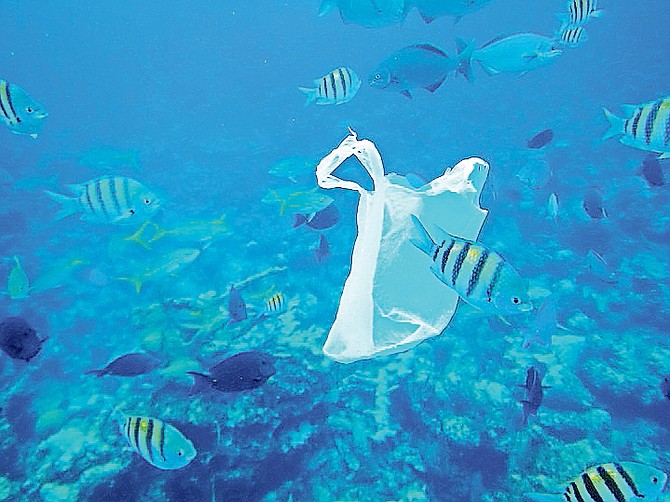 A plastic bag floating in the water off New Providence in this picture from BREEF.

What are single-use plastics?

According to plasticfreechalle..., single-use plastics, or disposable plastics, are used only once before they are thrown away or recycled. These items are things like plastic bags, straws, coffee stirrers, soda and water bottles and most food packaging.

“Petroleum-based plastic is not biodegradable and usually goes into a landfill where it is buried or it gets into the water and finds it’s way into the ocean,” the website states.

“Although plastic will not biodegrade – decompose into natural substance like soil – it will break down into tiny particles after many years. In the process of breaking down, it releases toxic chemicals, additives that were used to shape and harden the plastic, which make their way into our food and water supply.”

In light of the devastating effect of these products on the environment and people’s health, countries around the world have moved to ban them and encourage the use of alternatives.

According to the UK’s The Guardian, cotton buds, plastic drinking straws and other single-use plastics could be banned from sale in England next year in the next phase of the campaign to try to halt the pollution of the world’s rivers and oceans.

ENVIRONMENT and Housing Minister Romauld Ferreira yesterday officially announced his ministry's initiative to ban single-use plastics and Styrofoam in the country by January 1, 2020 - a move he said would have a significant impact on waste at the New Providence Landfill.

Mr Ferreira also spoke about the long-term health and environment impacts from single-use plastics - such as disposable utensils, straws and shopping bags - and Styrofoam, which contribute to street and ocean litter as well as health disorders when chemicals from these products are leached into food.

Speaking at a press conference held at the Bahamas Chamber of Commerce, Mr Ferreira said the first round of public consultations on the ban is projected to start at the end of April. A memorandum of understanding was also signed between the minster and Chamber of Commerce yesterday.

The target deadline for the required legislation is August this year.

The ministry is also working on making the release of balloons into the air illegal, as these contribute to ocean pollution.

This initiative is being hailed as "the first step towards developing a national waste management strategy for The Bahamas".

When asked how much of an impact the ban would have on the current state of the landfill, Mr Ferreira said it would be very significant. He also added progress has been made on the selection of a new operator of the landfill, with hopes to make an announcement by June.

"As it stands now, a significant portion of the waste that we get at the landfill is single use plastics-- plastic bags, etc," he said.

In terms of the impact on businesses that rely on the use of plastic bags and Styrofoam, as well as local distributors of these products, the ministry believes this will ultimately be a "win-win" situation.

According to officials, the ministry will conduct two rounds of public consultations with restaurants, hotels and retail outlets.

Feedback gathered will "assist the ministry in developing an alternative list that meets the demand and needs of businesses".

With grocery stores bringing in an estimated 26 million plastic bags a year, the ban is predicted to help businesses save money while also giving local "creatives" the opportunity to help develop alternatives.

Mr Ferreira added this is why the ban is a "great opportunity for the creation of jobs," specifically calling out to artists, straw vendors, and creatives.

He invited them to "redesign the traditional croker sack bags and add some Androsia and a dash of our native straw".

Furthermore, the ministry is working with the Customs Department and Ministry of Finance to "outline the correct protocol to reduce taxes on approved alternatives and to improve incentives for business operations".

The public is expected to be involved through two rounds of public consultations, which includes town hall meetings and visiting businesses and schools.

Additionally, Mr Ferreira announced a logo competition for students ages 13-18. The goal is to create a logo that represents the plastic bag and Styrofoam initiative.

All entrees are to be submitted via email by 8pm on June 4. The competition's flyer will be shared on the Ministry of Enviroment's Facebook page and through the media.

Officials say the upcoming ban will have positive impacts on local health and tourism.

According to Bahamas Plastic Movement, if the rate of plastic pollution on beaches increases, it could cost up to $8.5m annually in tourism losses for the country.

Mr Ferreira pointed out the dangers of these products on human health.

"When used in microwaves, Styrofoam releases fluorocarbons into the air and several other poisonous gases are absorbed into whatever food item it contains.

"Additionally, ordinary heat from the food or drink releases these toxins into the contents of the Styrofoam containers."

Mr Ferreira also added that people eventually end up eating their own plastics.

"Plastic and Styrofoam (don't) decompose," he said. "They break down into much smaller micro-pieces which are often mistaken for food by birds, turtles, and fish.

"Plastic contamination is passed up through the food chain, accumulating from prey to predator and ultimately culminating in humans. Now, we have come full cycle and find ourselves eating our own plastic waste."

Furthermore, these products "remain as litter along our streets, pollute our waters, clog our sewerage pipes and drainage systems for 500-1000 years."

The environment minister cited Haiti, Guyana, Dominica, Zimbabwe and Kenya as countries that have all made similar strides in recent years. He added Jamaica also has a motion before Parliament to ban plastic bags.

Mr Ferreira also added The Bahamas will become a signatory to the Clean Seas Campaign which was launched by the United Nations in January 2017.

Containers made out of bagasse (sugar cane pulp). Strong, natural and compostable.

We need a major education program about recycling in the Bahamas.I attempt to recycle aluminum cans. Maybe we can get it started in the schools, churches and government offices

back in the 90s the national trust used to have campaigns to help the school kids recycle aluminum, but then it ws too expensive to ship them out so they discontinued.

This is a perfect example of the well intentioned "government effort" going absolutely awol! I will say the pollution aspect, the styrofoam toxicity when nuked to thermal runaway is accepted, even the trash in the oceans and our streets, and the land fill "natural incinerator that self ignites frequently! but, plastic water bottles? Garbage bags? Large trash bags? How about plastic ketchup, mayo and peanut butter containers? Cooking oil gallon containers? Zip lock baggies, freezer bags, ice bags, the list is endless! By definition, plastic is single use until recycled! How about enforcing and even elevating littering fines? Taiwan will whip you for spitting out chewing gum, that works!

i thought about gallon milk bottles as well. can't imagine the shipping of glass milk bottles and the cartons are laminated with plastics anyway.

i avoid storing anything in plastic containers, but use plastic wrap to keep the food fresh.

otoh, watch how bahamians buy styrofoam plates and containers by the hundreds because they do not like to wash dishes. it is not the cost of dishes, they usually do not cost very much around here.

They said its a vision so not set in stone. In addition, there is a move to go to bio-degradable plastics which will be gone in a few years rather then decades and centuries we currently have. I believe on the Styrofoam, some of the packaging firms already have this, so it would be good to go that way.

He didn't mention the school girls who brought him the idea

This is great news...the Bahamas is “the canary in the coal mine” when it comes to waste disposal & the environment. Go to any Family Island and examine their landfill: the amount of non-degradable plastics, styrofoam, tires and appliances speak to the problem in microcosm. The introduction of the $50 appliance tax is a start (although one wonders if government has been collecting and using this income for its intended purpose?). Others have opined to ways this fund could create a nascent recyclable/ scrap industry locally...a discussion for another day.

Using our Customs’ policy (100% importation of these products) to limit these environmentally harmful products, while encouraging the use of reusable and biodegradable ones, is exemplary. These folks should be congratulated!

A logical next step would be to limit imports of water, and other libations, to glass bottles/containers that can be locally recycled.👍🏽

The $5.00 tax on tyres doesnot seem to be used by the Government to collect and dispose or recycle tyres ...... Where is this programme being carried out in the country??????? ........... Maybe someone in Nassau can respond

I suspect diapers and sanitary towels are also environmentally problematical but the push back to banning these items would overwhelm a sitting government.

my groceries were once packed in biodegradable bags. I had to walk back home. The plastic was so biodegradable that it degraded before i arrived home and had to juggle a bunch of items. have never seen those style bags at that store anymore.

but there are serious environmental problems in the production of those plastic reusable totes they sell for a dollar from time to time, look it up on the internet.

i do reuse the foodstore plastic bags, i do not buy garbage bags and dispose of my household garbage in them