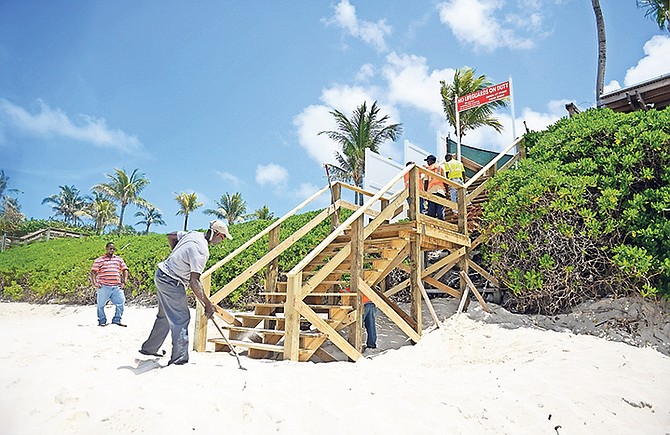 THE public access path to Cabbage Beach is now open after months of being closed due to a collapsed stairway.

In January, it was reported that a 50-year-old French tourist was badly hurt as he tried to get on to the beach when the steps collapsed beneath him, hurling him on to rocks seven feet below.

His wife and children looked on helplessly as the man - unable to move - started being dragged into the ocean by the crashing waves.

He was later rescued and pulled to safety by employees from several surrounding properties.

The collapse and subsequent repairs forced the “temporary closure” of the public access path to the eastern end of the beach.

On March 27, Mr Fields told The Tribune that the repair schedule had to be delayed due to weather and design issues.

However, he estimated at the time that repairs would be done within the next two weeks.

On Tuesday, Mr Fields confirmed that the access is now open.

Truly pathetic. The wood stairs shown look as rickety as the stairs that collapsed. A proper concrete stairway should have been built.

I agree, this hardly looks adequate or appropriate for “Public Access” to the Islands most most popular Beach.

The salt and moisture heat cold, elements will certainly dissolve any metal nails or bolts and fibre, shrink, expand in wooden structure in places not visible creating likeky danger to users plus vibration, movvement stress compounding problem. Not to mention some big boned mamas an papas. Apart from that it is an unsightly manmade outofplace temporary eyesore not doing justice to any Bahamian carpenter muchless the hotel and likely to be photographed countless times video and in world media. It is a marketing disaster advertising a billion dollar asset the pristine beach, sand, emerald water beach that viewerrs should see to want to come an spend money ..?xcuse me but dey is hav to hold on wood rail and climb down wooden contraption an Jamaica an Turks dey visitors dont do dat type of ting to get to their beach. Why this contraption for locals an visitors?? Why not simply not use a D8 clear a walkable grade, plant some mangroves and native trees to hold and strengthen soil. Make a international photohraphed statement to advertise our locals can build as well as chinese, mexicans, indians or other fpreign labour.

Ed Fields must have ensured this Atlantis project was given to one of his cronies. Hence the grossly unsatisfactory outcome at what was likely an outrageously high price.