No Plans To Shut Down Auto Business After Fire 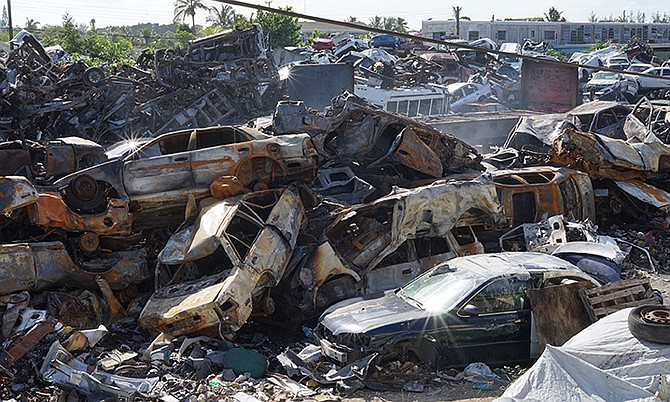 THE government does not have any current plans to shut down or relocate Strachan's Auto Repair, press secretary Anthony Newbold said yesterday.

The blaze on Sunday night when more than 200 cars burned was not the first time a fire has broken out at the compound.

The fire that broke out in 2013 was described as an "inferno" at the time by then-Garden Hills MP and former Speaker of the House Kendal Major.

In interviews with The Tribune yesterday, both residents and business owners in the area expressed concerns about the effects the compound poses on families, property, and businesses.

However, Mr Newbold said the government does not have any plans at the moment to become involved, especially as the investigation into the blaze is ongoing.

"Did you ask the operators? No. I don't know… Between the fire people and the people who licence Strachan's Auto, gonna have to deal with that," Mr Newbold said.

"As everybody knows, there's been a fire there before. Residents have complained about it. And so the people who licence and operate Strachan's Auto are going to have to come to some conclusion.

"And I'm sure the people who live in the area (are) going to have something to say about it, because they're the ones whose properties are at risk, about what happens with Strachan's Auto. Has there been an official position taken at this point? No, there hasn't been."

When asked if the government has any plans to step in, Mr Newbold said not right now.

"Of course that could have come from many things -- oil, gas, fluids, throughout that property. And so anything could have happened. I'm sure the first thing they want to do is have that investigation completed and they have some definite conclusions that they can arrive at, and they will decide what they (are going) to do with it."

Yesterday, The Tribune canvassed the neighbourhood near the site. A landlord and resident of a nearby building described the impact the lot and the sporadic fires had on the seven families who live in his building.

The landlord, who wished to be identified as "the chairman" said outside of the fires, the neighbours "catch hell" due to the presence of rodents, mosquitos, and snakes which he says manifest themselves due to the cars at the site.

"Now at the end of the day let me say that I try to be neighbourly," he said. "It's not my endeavour to try to put a noose around nobody's neck here, but it's only so much you could take and you have to draw the line somewhere.

"Now over the years we had a number of fires around here, but look at this incident on Sunday and how close it came to us-- the firefighters had to spray water on my roof about six times.

"I have another tenant who was saying that his car was damaged because it was a couple feet away from the blaze and it's a very stupendous situation."

He said such an extreme number of cars should not have been allowed to accumulate there in the first place and described the situation as "out of control".

Peter Rahming, of PTM Fine Woodwork, a business located across the street, did not see the effects of the fire until Monday morning.

"It's a good thing that a lot of breeze wasn't blowing, because a lot of homes might have been…devastated," he said.

Mr Rahming, whose business has been located there for the past two years, called the auto repair site a "hazard" and suggested the government relocate it.

"I think they should relocate it, honestly…If the government could give them some kind of Crown land or something, I think that would be best."

Burnt out and gutted cars easier to crush and ship...for scrap metal that will be melted down anyway... just saying.