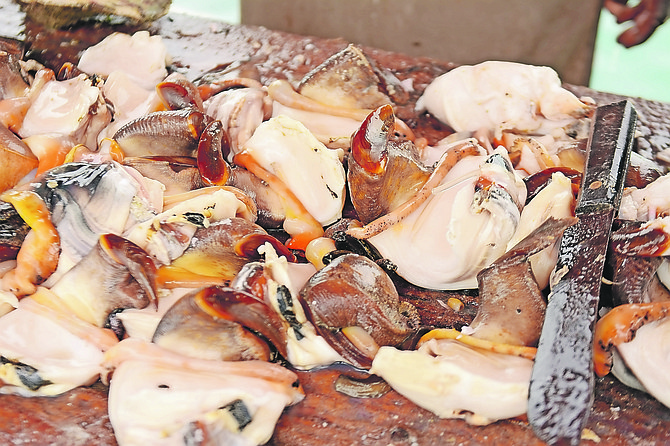 Conch being prepared at Potter’s Cay.

SEVERAL factors at the Potter’s Cay Dock could be creating an environment for the bacteria which leads to conch poisoning to thrive, Agriculture and Marine Resources Minister Michael Pintard said yesterday.

Apart from the failure of vendors or consumers to wash raw conch in fresh water before food preparation, these conditions include issues with a nearby water treatment facility and ongoing dredging in the area, Mr Pintard told reporters.

However, as these cases continue to grow, Water and Sewerage Corporation Executive Chairman Adrian Gibson sought to distance the water provider from any blame attached to the ongoing outbreak.

He told The Tribune a number of tests were conducted with results that free the corporation of any culpability.

In the absence of a definitive cause, Mr Pintard reiterated the government’s ultimatum for vendors to either follow safe handling standards or face the revocation of their licences.

Some vendors at the Potter’s Cay Dock have insisted that a broken septic tank is the main contributing factor to the issue.

Asked about this, Mr Pintard said: “Certainly Minister Sands addressed this issue earlier in terms of the virus existing in warm water (and) it having an impact on a number of persons primarily at Potter’s Cay and certainly another location in New Providence. But at no point we indicated what we thought the source was.

“We’ve heard speculation that one of the contributing factors may be the plant that is located in the area of Potter’s Cay and we know Water and Sewerage has to do some remediation work there.

“I would not preempt the chairman commenting on the timetable for that work being done. We do not rule out the possibility that it enhanced the environment that led to the outbreak but we are not establishing any cause or effect.”

Mr Pintard said he could not confirm whether there had been broken pipes at the dock. But he said this was something officials were continuously looking into.

“Of course from the beginning again you would recall that in the past we have had a similar outbreak and it occurred as a result of dredging in the harbour so many persons have established a link between the dredging and the treatment facility that is in the area and what is occurring. But again I have no definitive word to that effect but all of those matters are being addressed. So Water and Sewerage is certainly exploring it and looking to make whatever decisions necessary to remediate the situation relative to the treatment centre that’s located there.”

He also said: “Tomorrow I will be meeting with vendors in Grand Bahama to address this issue to encourage them to be safe in food preparation to emphasise to them as we have with the folks at Montagu and Potter’s Cay that if persons are not following the standards we have prescribed, we are prepared to revoke licences.”

For his part, Mr Gibson said despite the vendors having access to fresh water from WSC, many of them still refuse to use it to wash conch.

“WSC has done various tests and nothing was discovered relative to any leakage, etc, from that plant,” Mr Gibson said.

“The vendors at Potter’s Cay for many years now have been provided with water services. However some of them continue to use seawater to wash the conch.

“WSC has run extensive tests and we have written any number of reports liaising with Ministry of Health and (Department of) Environmental Health and it has been shown there has been no seepage or leakage relative to that plant.

The government intends to send inspectors out to ensure vendors selling and preparing raw conch are adhering to health regulations, including using fresh water to clean the seafood, officials said last week.

Those who do not comply with regulations face being shut down, although government officials have said they would rather have vendors comply with the recommendations instead of being punished.

they need to determine how many poison conch came from porter's cay and how many came from Arawak cay, and narrow it down from there????

Potters Cay is nasty. the Sewerage Plant was closed years ago and moved to the Landfill. There was to be no more sewerage processed at that plant. But it still smells like sh-t when you drive by. Bathroom facilities are filthy. Vendors and customers alike urinate in the water where the conchs are "strung up". They reside in muck and filth that has been accumulating forty years. No one washes their hands before mixing a salad. Every other would be restaurant owner has to have male and female restrooms, hot and cold running water, health certificates, and now this poisoning is being blamed on not washing the conchs in fresh water. Now we are going to inspect what is going on. Bulls--t. Close the whole place down. Make them put in individual restrooms, make them have a BPL hookup, make them adhere to all of the requirements of a restaurant, and have regular sanitation inspections. Stop all of this pointless talk. Oh, and make them pay the rent for which most of them are in arrears.

You are wrong about the sewerage plant. While it was closed for local (Nassau) it still served parts of Paradise Island. And like you, many did not make the connection where raw sewage from Paradise Island hotels were treated then pumped into the ocean. Hence the continued smell of a raw sewer.

besides the hotels and condo units that supposedly have their own private sewer treatment plants and just pump their Schit straight into the harbour...

Why is the police involved in something they are not qualified to assess? Shouldn't this be a job for the health inspectors and/or environmental services?

Shut it down it's nasty fluckin place that is more of an eyesore and an embarrassment then anything it is purported to be....