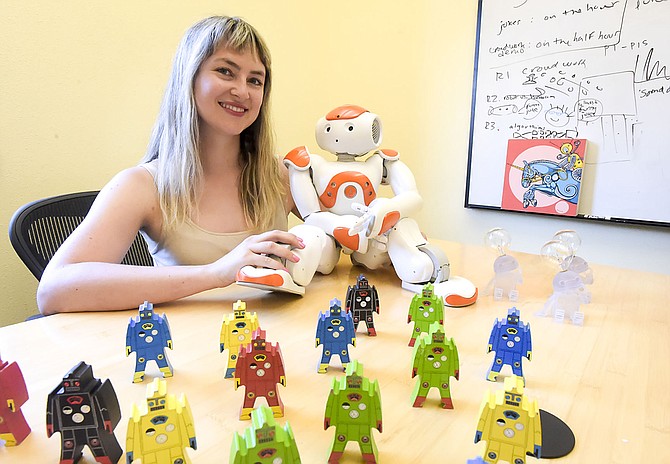 Heather Knight, a roboticist and assistant professor in the College of Engineering at Oregon State University, poses in her office, in Corvallis, Ore, with robot Ginger. Knight directs the CHARISMA, aka Collaborative Humans and Robots: Interaction, Sociability, Machine Learning, and Art, research lab, whose goal is to borrow on methods from the performing arts to create more socially intelligent robots. Photo: Andy Cripe/AP

The Oregon State University computer science professor recently had her students program a robot to act out a scenario with a woman involving an apple.

“I am the keeper of the apple,” the robot stated.

The woman asked the robot if she could eat the apple. The robot told her “no” and that the apple was poisoned, but the woman ate it anyway.

“Now I am the keeper of a dead body,” the robot joked.

Knight, a roboticist, began teaching at OSU last year. She directs the CHARISMA (Collaborative Humans and Robots: Interaction, Sociability, Machine Learning, and Art) Research Lab, whose goal is to borrow on methods from the performing arts to create more socially intelligent robots.

“I think that to make functional machines you need to think about how to get them to do their job but also how to add value to that shared experience,” Knight said. “It’s kind of like a co-worker. It’s more fun to work with people that you like and maybe tell you a joke at the end of the day.”

Knight’s “full-fledged love affair” with robotics began during her undergraduate studies at the Massachusetts Institute of Technology. There, Knight worked with Cynthia Breazeal, who is considered the pioneer of social robotics. In 2002, Knight created an interactive installation called “Public Anemone”, which was a fiber optic sea creature that could respond to stimuli, such as hissing if a person got close to it.

She bought her first robot, which she named Data after the “Star Trek” character, in 2010. Data was a Nao robot, a programmable humanoid machine developed by Aldebaran Robotics, a French company that has since been acquired by SoftBank Group.

Knight liked the idea of interactive art but the interactions were too short for humans and robots to build relationships. That’s how she got the idea of robots performing theater. But, since she had only one robot, she decided to try stand-up comedy.

“It was a happy accident but such a great format for robots,” Knight said. “It’s so much more interactive with an audience than standard dramatic theater.”

Comedians have a set of jokes but their performances are also dynamic and they adapt to their environment and audience, she said.

“It’s a good metaphor for what we would want from a service robot in the future,’ Knight said.

In 2010, Knight and Data did a Ted Talk titled “Silicon-based comedy” in Washington, DC Audience members were given red and green cards and asked to hold up the green card if they liked a joke delivered by Data and the red card if they didn’t like the one liner. A microphone was also listening to aggregate laughter and applause (or booing) from the audience. The robot used this feedback to cater its jokes “Netflix-style” for its listeners.

“A doctor says to his patient, ‘I have bad news and worse news. The bad news is that you only have 24 hours to live,’” the robot said to the crowd. “‘That’s terrible,’ said the patient. ‘How can the news possibly be worse?’ ‘I’ve been trying to contact you since yesterday.’”

Knight said she programmed 200 jokes into the robot ahead of the Ted Talk. They were labeled by topic, appropriateness level, length and other variables. If a joke did well, the robot would choose a similarly labeled joke.

Knight went on to study robotics at Carnegie Mellon University, earning her doctoral degree in 2016.

A few years ago, Knight replaced Data with an updated Nao robot, which she named Ginger for its orange head. Knight also experiments with other robot platforms. She built “chairbots” by attaching Neato Botvacs to IKEA wooden chairs.

Knight and her students once had a chairbot wait in line at the café in the Kelley Engineering Center. The bot, which was being remote controlled by students, had a sign taped to it stating “I want a blueberry muffin.” Also taped to the chair was $5. The chair received its muffin and change and turned to leave, but the money fell to the ground. The café clerk told the chair to wait, stopped the chair and taped the change to the bot.

“I really like putting robots in human spaces and public spaces and in general we try to collect a lot of data,” Knight said.

She and her students have also programmed a TurtleBot they call Resolution Bot, a play on the New Year’s resolution because it acts as a health coach. At the beginning of the year, the robot visited professors and students to ask how they were feeling. The robot would then count out exercises for the person to do, such as push-ups, or go on a walk with the person. The robot also carried bananas and other healthy snacks to offer the people. The robot was remote controlled by students, who developed ways to animate the robot more, such as having the robot nod when it counted out exercises or move toward the person if they put their hand up for a high five.

“I like (robots) to have a basic thing they’re trying to do, but when you encounter people there’s also all these opportunities for playfulness and character and I think that’s really fun,” Knight said.

She said the work she does with robots is similar to Siri, a virtual assistant accessible on Apple products, in that her robots are social agents learning from people. But, she said she’s really interested in body language and putting robots in proximity to humans.

“The stuff that I work on is kind of science fiction,” Knight said. “This idea of robots that are socially intelligent. It’s exciting because we get to be paving a path toward that kind of future.”