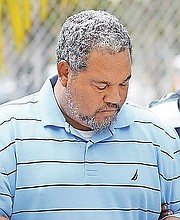 WITNESS testimony in the $280,000 Dwight Major drug case was yesterday adjourned to September 4 after Major's attorney submitted a sick certificate to the court on his behalf.

However, Major was a no-show, with his attorney Ian Cargill submitting a sick slip on his client's behalf.

The contents of the document were not revealed in court.

Major during an appearance last week, informed the court that he was seeing doctors for an ongoing heart issue.

This has been the third adjournment in the matter in the past two weeks.

Last Tuesday, the case against Major was adjourned for 24 hours following an apparent mix-up in the appearance date for Major and the man with whom he was arrested.

The next day, Major's attorney submitted an application to have Magistrate McKinney recuse himself of the matter.

It is alleged that on the date in question, Dwight Major and another man conspired to possess and were subsequently found in possession of some $283,000 worth of marijuana with intent to supply.

According to initial reports from police, shortly before 4am on Wednesday, April 4, Drug Enforcement Unit officers assisted by Mobile Division officers, while at Tonique Williams-Darling Highway and Baillou Hill Road, stopped and searched a Nissan March with two male occupants and discovered 283 pounds of marijuana.

The two men were taken into custody.

Both men pleaded not guilty to the charges.

The matter will continue Tuesday, September 4, when Magistrate McKinney is expected to present his ruling on the recusal application.