Face To Face: Life’S Lesson - Give It Everything You’Ve Got And Don’T Be Afraid

THE Rev Dr James S Sweeting is one of those men who has lived several lives and is still around and ready to do more. Many people touch just one or two professions in their lifetime. Often, it is advised to stick with one career. But Rev Sweeting proves it is possible to be successful in several careers and as a business owner – all in the same lifetime. The key to it, he says, is to give each goal you set everything you’ve got and to know when its time to move on to another level.

The Rev Dr James S Sweeting sharing his knowledge of bush medicine at a local expo.

His ability to make major transitions in life so easily started when he was a child. He was the second of 11 children born to Samuel and Gertrude Sweeting and he was their first child together. His father was a painting contractor and his mother took pride in being a great housewife, but also did some paid domestic work.

Life was a “rough journey” for their big family and the Sweetings moved from house to house in New Providence as his parents tried to make ends meet. When the young James was almost nine years old, his parents made the decision to take the chance to start a new life. His father packed up the family and moved them to the Exumas. There, Samuel continued to work as a painter. Because land was so much more affordable in the Family Islands, he was also became a farmer, amassing enough animals to run a large chicken farm and having nearly 600 goats.

“Life was much better there,” James said about the move in the early 1960s. 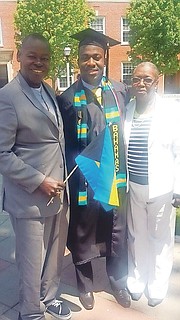 The Sweetings with their grandson, Kortney Cartwright, at his graduation at DePauw University. He is a district branch manager for BCForward, leading their branch in Minneapolis.

“Growing up in the islands was the pearl of all life. I was able to learn the values of being Bahamian. We learned manners and respect and the village assisted in raising the child. You had to pay homage to everyone. We never went hungry. We would pick sapodillas hanging from the trees, bury them in the ground, and cover them with leaves and make a dilly nest. Every day we would check it out and have a feast.

“We enjoyed eating the coconut dry as well as having jelly coconut, pigeon plums, cocoa plums and so much more. There was always something to eat. We went crabbing and our mother would travel to Nassau to sell them during crab season. We went fishing a lot, sometimes with our father, sometimes with the other boys in the village, sometimes on our own. It taught us boys how to be men.”

For the Sweetings, education was a top priority for their large family. James remembers his time in Nassau in primary school, having been taught by the late great educator, Naomi Blatch, whom he described as “a beautiful, dark lady” and a “nurturing teacher” whom he never forgot all his life. In Exuma, he attended Forbes Hill all age school and then Georgetown all age school. 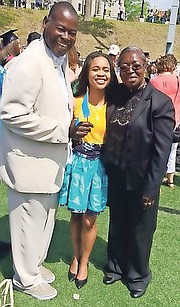 The Sweetings with their granddaughter, Katrina Cartwright, who is wearing an outfit made of Androsia fabric at her graduation, proud to have grown up on Andros Island.

Upon graduation, James first worked as a teacher in Exuma; it was customary for top achievers in their classes to become school monitors, which is equivalent to a teacher’s aide. However, back then, this often meant taking control of the entire class.

Eventually, he left the Family Island to head back to the capital and spent the first few years working as an electrician. He credits Henry F Storr for teaching him the trade. The tourism industry was booming at the time and he eventually found work in several hotels. His ability to adapt and willingness to learn led him to work in various aspects of resort life. These experiences proved fruitful but when he was finally moved to the kitchen, he found a niche that led to a lifelong passion for cooking. He remained working in the kitchen and served at both the Nassau Beach Hotel and the old British Colonial Hotel.

James always had his sights set on higher education and he wanted to learn new skills in life. While working in the hotels, he took the nursing exam, but it took a while for him to hear back from the nursing school, so he took the policing exam as well, and decided to take on that career path.

“I decided not to be a nurse because I thought I may end up being afraid of all that blood, only to discover that I got to see more blood as a police officer,” he said.

He spent 11 years on the Royal Bahamas Police Force, becoming a corporal before he left in 1984. While serving on the force, James pushed himself and decided to attend the College of The Bahamas (now University), studying teaching and theology. 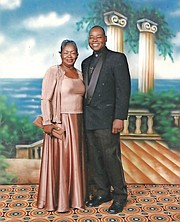 “Education meant a lot to me,” he said.

“I realised that with an education, you don’t have to settle with mediocrity. The sky is the limit and that is what I taught my children.”

While serving on the force, James met the love of his life, Barbara Evans-Harris. He was stationed as an officer in Andros at the time and she worked at the local government office.

He recalls: “I was just out of COB when I met my wife. I was almost 30 years old then and we have been together 37 years. We have five beautiful children and about 16 grandchildren; we are blessed.”

In Andros, James nurtured his family and continued to expand his professional skills. He decided to focus on his passion for cooking, but also dedicated his life to the work of the church. While he was still in Exuma, he was ordained by a missionary pastor who was holding Vacation Bible School classes.

“The church has always been a part of my life,” James said. 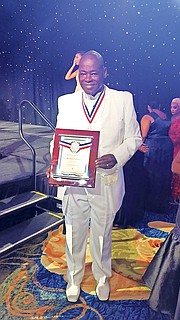 The Rev Dr James S Sweeting being made a meritorious councillor by the Free National Movement.

“Growing up from small, the home training my parents gave me, the only thing I knew was the church. My father was a deacon and my mother was a missionary. I have always been in ministry and I used it to the fullest extent. I later became a full pastor and was nurtured by the late Rev Dr A Samuel Colebrooke of St Paul’s Baptist Church on Bias Street. I went there as a child and ended up back there when I relocated to Nassau. He and my father were related. My mother’s church was Mission Baptist Church, directed by Rev Dr Reuben Cooper; I was christened there, but I ended up attending St Paul’s with daddy.”

James applied himself and took up theology courses, travelling to the US for study and completing correspondence courses. In Andros, he became a pastor for the Church of Christ, which has over three million affiliates around the world – an organisation for which he still serves as pastor.

As a chef, he blossomed in Andros with his own catering business. He owned two restaurants and catered to locals and tourists. His food became so popular he was invited to participate in food shows in America. He participated in exhibitions in Washington, DC, and in Coral Gables, Florida, where he won first place on both occasions.

He said proudly: “My trademark is the ‘wabbie’. It’s a multi-purpose bread that can be used for breakfast, lunch or dinner. I have been called upon to travel to many countries to demonstrate its preparation, including doing food shows for the Ministry of Tourism. People find it very enjoyable. It’s a bread that opens automatically (when you pinch it) meaning you don’t need a knife to cut it. You can stuff it with fried or poached eggs, egg salad, tuna or chicken salad – so many things. It’s something like pita bread. My wife likes it with minced lobster… and she makes a mean minced lobster.”

James was also a community leader in Andros. He was the first and founding president of the Chamber of Commerce for the island. In local government, he served as chairman prior to the government naming a chief counsellor. He was first assistant chaplain for the Free National Movement and was then appointed to the position of chaplain, a position he maintained for eight years.

Eight years ago, James was diagnosed with diabetes and suffered from kidney failure. At one point in his life, he was weighing as much as 340 pounds. Two years prior to the diagnosis, he decided to start eating healthy and knocked 100 pounds off his weight. He had to once again relocate to Nassau, this time to receive constant dialysis treatment.

“I didn’t look for sympathy; I accepted it and learned to live with it and now I encourage others to adopt healthy living practices.”

He leaned on all of the knowledge he gained about bush medicine from his childhood in Exuma and his long years in Andros to pull him through. He is now an advocate for preventative care and has been encouraging others to find their natural medicine in the Bahamian coppice.

• The Rev Dr James Sweeting recently published a book on bush medicine. He also continues to operate as a Justice of the Peace from his office on the corner of Wulff Road and Quintine Alley. To purchase a copy of the book or to see him for JP services, call 432-7767.

Recognition well deserved. I've known Mr Sweeting for about half of my adult life and can say I've learned a lot from him. The most important lessons of all are-love for family, the loyalty of friendship and dedication to your passion, purpose and gift.