Why We’Ve Turned Down Our Honours 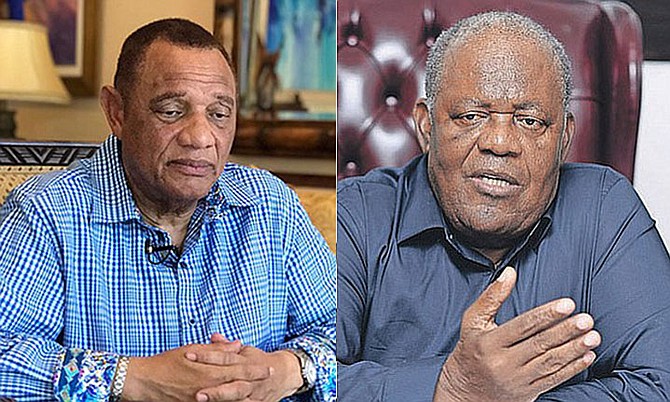 FORMER Prime Ministers Hubert Ingraham and Perry Christie yesterday explained they deferred acceptance of the country’s national honours for separate reasons, with the latter saying his decision was a considered response to the criminal charges brought against several members of his former Cabinet.

The men were to receive the Order of the Nation award which is bestowed upon all people who have served as governor general or prime minister. Their refusal was considered an embarrassment for the Minnis administration after it was reported by The Tribune earlier this month.

For his part, Mr Ingraham said he saw no need to rush to accept the award.

“I’m the youngest one of the persons who are eligible at the moment,” Mr Ingraham said. “I can wait. Mr Pindling got his own posthumously, there is no rush for me. The fact you are eligible don’t meant you must say yes today.”

For Mr Christie, the matter appeared to be more personal.

“What I indicated was that firstly the law was conceived and presented to Parliament by my government so therefore it is nothing I would walk away from,” Mr Christie said, “but I told her (Governor General Dame Marguerite) in the letter that due to the circumstances and developments that have taken place since the elections, I would not wish to accept the award at this time.”

Mr Christie continued: “This is the Order of the Nation, it’s to my position as the prime minister of the Bahamas that position was contributed to by two persons, or three now, who have been charged before the criminal courts.

“Whilst those cases are going on, I deemed it not appropriate for me to accept any kind of honour until such time as justice is done and seen to be done, and I believe without commenting any further, that should be understood.”

The pair informed Governor General Dame Marguerite Pindling of their rejection of the award in separate letters sent to Government House, but had both previously declined to elaborate on the matter.

Reverend Sebastian Campbell, chairman of the National Heroes Committee, has called the phenom an “embarrassment” for the Minnis administration.

However, he noted the Minnis administration should have asked them if they wanted the award before announcing them as recipients earlier this summer.

The former leaders were among 38 people selected to be awarded the national honours this year in accordance with the National Honours Act, the first group of honourees selected.

On the sidelines of a ceremony to bestow the ‘Order of the Nation’ upon former Governors General Sir Orville A Turnquest and Arthur D Hanna, Mr Ingraham said he was disappointed Bishop Laish Boyd had not been named.

He noted Bishop Boyd had refused similar honours from the Queen in favour of a Bahamian award just like Mr Hanna.

Mr Ingraham added: “I’m disappointed that Bishop Boyd didn’t get his own because he was the one minister of the gospel that they (the British) offered who said he would wait until the Bahamian had their own honours, and I hope that he will be on the list soon, that he gets his own soon. But they are both deserving.”

Two comrades teaching us that even with the nasty rough and tough politics - two good man's can remain close buddies. There has never been even ounce believable evidence- where either of the two man's - were overly financially enriched after each served their terms as Bahamaland prime minister...... that is some accomplishment - even more so having served as PM's Caribbean colony of islands. Two man's approaches at governing so different but still much alike in so many good ways. Good, long healthy, safe life wished both former PM's.

While we can bash the Trump administration so easily, who among us can be proud of our own political establishment? This borders on outright absurdity. And, we keep asking ourselves why we can't do better? Wow!

Wow what a time to finally admit and own up to crimes committed by your colleagues. If they aren't good enough them i am not.... kinda the same thing he was told last may.....

I thought they were going to say they rejected the honors because deep down they know they don't deserve it !

They wouldn't have to look too deep to find that out!!