Face To Face: Teenage Twins On A Mission For ‘Everyone’S Grammy’

Deaconess Esther Elizabeth Neely-Brown left such an indelible mark on the lives she touched that her legacy lives on even though she died in November 2016.

Described as “full of life”, “jolly”, “caring” and “giving”, Esther displayed the kind of personality which made her outstanding on the job, a leader in her community and beloved by her many family and friends.

She gave so much of herself during her lifetime that her grandchildren, 18-year-old twins Rico and Ricah Neely, are following in her footsteps and giving back - and they are doing it in her name.

Initially, this week’s Face to Face was going to be about Rico Neely, a young chef with great potential who, although he is still in college, is already trying to help other youngsters to realise their goals. However, he pleaded to me for the focus to be shared with his sister and their joint venture, the Queen Esther Foundation, which began in November 2017, a year after her death.

The twins explained the foundation was established to honour their grandmother who was a well-loved and cherished member of the Elizabeth Estates community, known for her “pleasant personality and amazing food”; a woman who was “everyone’s grammy” and a mentor to many, especially young people.

Mrs Brown was born on June 3, 1953 in historic Bain Town to the late Leroy and Erma Neely. She received her early education from St Joseph Catholic all-age School, then went on to AF Adderley where she graduated. She attended the Bahamas Technical and Vocational Institute before joining the Royal Bahamas Police Force. Later, she moved to the Department of Immigration and finally to the Ministry of Tourism where she was attached to the Bahama Host Training and Education section.

She died on November 6, 2016, at the age of 63 at Memorial Regional Hospital in Hollywood, Florida, following medical complications. In her obituary, friends noted that “to know her was to love her” and that “she made people smile and laugh wherever she went”. She had the support of her husband, Patrick Brown, who enjoyed cooking with her as well as worshipping with her – she was a Deaconess at Epiphany Methodist Church. Her children refer to her as “affectionate, ambitious and classy” and today, her grandchildren are committed to carrying on her memory. 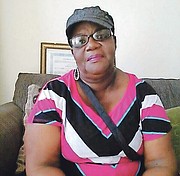 “Because of my passion and love for Culinary Arts as well as baking and pastry making, I wanted to share the joy my grandmother gave me with others – teaching children to bake and utilise their time wisely, and helping them gain a skill or trade,” said Rico.

Queen Esther’s dishes were not only noteworthy, but often shared with those whom she worked and with those in need in the Elizabeth Estates community where she lived. Ricah added her grandmother would also offer clothing to people in need and even shelter when necessary. Ricah, who is currently studying marketing and journalism at the University of The Bahamas, organises and promotes the events and provides support for her brother who leads the classes.

His love for cooking began when he was nine years old, when he cooked Christmas dinner with his father. His father learned from his mother-in-law, Queen Esther. He recalls standing on a five-gallon bucket to see inside the pot and through that father and son bonding session, his love for cooking was born. His favourite dish from his grandmother was her macaroni and cheese, while Ricah described her grandmother’s perfect pineapple upside-down cake. She remembers waiting for her grandmother to pour the cake so she could lick the remnants from the bowl. 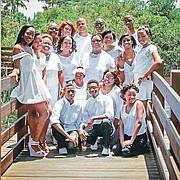 The competition was hosted by the Ministry of Education with Mahatma Rice and Robin Hood Flour as sponsors. He won with a dish that consisted of a Bahamian peas ’n rice-inspired risotto, a chicken roulade and a mushroom duxelle garnished with his own green oil. For dessert, he reinvented a baked Alaska using rice pudding and added a touch of Bahamian guava jello.

He went on to be invited to join the Bahamas National Culinary Team as an apprentice or student chef, practicing alongside award winning and world-renowned chefs including chef Sheldon Tracy Sweeting, chef Ron Johnson and chef Marvelous Cunningham. He recalls observing and learning much while working with these artists in preparation for the 2015 Taste of the Caribbean competition held in Downtown Miami, Florida; the team brought the winning trophy back to The Bahamas, making it an unforgettable experience for Rico, who was 15 at the time.

In 2016, he entered and won the Ministry of Agriculture Food Exposition in three categories where he won “best dish”. Rico was then chosen to participate in Johnson and Wales University’s Wild Cat Weekend with Junior Achievement. He was given an annual $10,000 scholarship to attend university.

Last year, he began his journey in tertiary education at Monroe College in the Bronx, New York, and is a part of the Bahamas Public Scholars Programme. He is majoring in culinary art and hospitality management.

Prior to university, he had the opportunity to learn in Italy, travelling to nearby countries to increase his culinary knowledge and taste.

With this kind of experience, Rico decided to share his passion with younger kids and held a summer camp this month.

Classes were held from August 6 to 17 with 22 students enrolled in the camp at Anatol Rodgers High School’s kitchen. The students learned basic kitchen knife skills and benefitted from tutelage from professionals such as chefs Rosemary Sinclair Hepburn, an executive chef at Atlantis Resort and Cacique award winner; Keisha Bonimy, former coach for the National Junior Culinary Team; Shelmerdine Cartwright, sushi chef at Atlantis Resort; and Hazen Rolle, current Junior Chef of the Year for the Caribbean.

At the end of two weeks, the students participated in a culinary competition after learning to make dishes such as pizza and ravioli, and even learned to make non-alchoholic drink mixes.

For their field trip, the kids visited Heaven on Earth Farm to gain an appreciation for how produce is grown and how farm animals are kept before being processed to eat.

The Ministry of Tourism (through Ian Ferguson of Bahama Host) and Junior Achievement along with Gravitas Bahamas helped to make the event possible through significant sponsorships. However, the Neely twins are appealing for more companies, private and public, to participate in order for the Queen Esther Foundation to reach more children.

Parents were elated and one even said her difficult child seemed to have a new perspective on life and was setting goals.

This is the kind of success Ricah was hoping for. She plans to take the foundation to the next level by creating a club for kids to learn how to become entrepreneurs. She has her own company, Ricah’s Snaps Photography and has a passion for marketing. Both attended St Anne’s for most of their schooling but transferred to Doris Johnson Senior High where they both graduated with honours.

“I want the Queen Esther Foundation to inspire students to find their career paths and for many to even become entrepreneurs,” Ricah said.

“In government schools, we want kids to do internships every year from grade ten as opposed to waiting for grade 12. Many of them are asking from grade 10, ‘What do I want to do? Where do I want to go?’ Some persons don’t figure it out until college and then some are still not sure. I want to open that opportunity for them to see where they want to go.

“They may be interested in entrepreneurship but we need a mentoring programme. We need corporate support. We need speakers, we need professionals to give advice in the various fields of work.

“We don’t want companies to just pour out money; we need them to pour out their knowledge to the students so they could be inspired… maybe have a travelling opportunity. We want them to experience things they never dreamed of.”