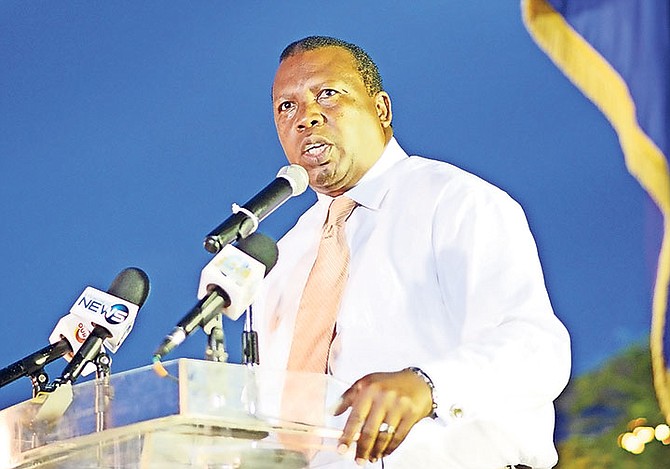 "We can't believe the minister and the prime minister put down a plaque to promote the sale of the 10 lots created in the Sunset Close extension by the PLP and he has not sold them," Mr Forbes said in a press statement yesterday.

The South Andros MP further claimed the lots at Sunset Close Subdivision extension had already been pre-assigned by the former administration and were pre-approved.

He said he found it amusing the government would promote a project he claimed was designed and approved by the PLP ahead of the 2017 general election.

"I am advised that all these lots were all assigned prior to the election and because of their size, specially designed houses were to be constructed there to complement the existing subdivision," Mr Forbes said.

"The persons who got the assignments were pre-approved so why are the applicants now failing to qualify?

"In my budget statement I warned the government that their programme was flawed. I did not believe that applicants who needed affordable housing would have the resources to take advantage of service lots. What I predicted has come true. The programme has fallen woefully short of the mark."

On Tuesday, Mr Ferreira told reporters outside of Cabinet just nine of 60 applications received by the Department of Housing were eligible - some six weeks since the initiative was launched.

He urged Bahamians to get their "financial house" in order as the lots on offer represented a once-in-a-lifetime opportunity to purchase land in New Providence at low rates.

The Department of Housing launched its serviced lot initiative at Sunset Close off Carmichael Road, called the Sunset Close Subdivision Extension, on July 12.

Those lots are priced at $15,000, but Mr Ferreira said the price for the other lots, in Fox Hill and Carmichael, will depend on the cost to install infrastructural services.

In his statement yesterday, Mr Forbes said: "Their housing programme is woefully inadequate, under-resourced, if not non-existent. It is shameful that all the housing minister can tell us is how the majority of people who applied for their service lot programme could not qualify.

"The FNM has this unfortunate way of glorying in the misfortunes of its citizens. The minister should have instead been boasting about how they are working with each applicant to ensure that they do qualify."

Mr Forbes added: "The picture of the prime minister and his minister of housing laying a plaque to promote the sale of a mere ten lots shows how desperate this government is for good news. Unfortunately, there is no good news there either."

ROC wid Doc has the right idea and in all such programs some the lower number will qualify and some being the higher number will not. Yes the market has dramitically changes with expenses of course being higher while incomes remain low. Investigations into the past 4000 failures need to start so that the formula can be done as to wjo can qualify.....the Minister simply needs to hire better help to make this multi million dollar bringing many benefitsvto all.....but yet again typical being cheap gets much embarassment. Innovation is needed using new ratios coupled wid.......????....the last set of ratios 45% tdsr total debt service ratio is from the last century...while every finamcial figure has dramitically changed......hahahahahahahaha....you know why I can say that.....

Will it always be FNM fighting the PLP and vice versa? When will our elected officials simply start taking the time to help Bahamians, instead of this ignorant blame game that costs us not only money, but the future of this country, as well? Are our elected MPs just plain stupid, or is their some benefit to taking this country backwards over and over? The Bahamian people need to wise up soon, as the saying goes, and get these losers out of office. I am so disappointed that south Andros couldn't do better. And, that this country couldn't do better than what we have now. I am just so sick of these petty politicians.

First of all there has to be a clear distinction between the terms 'low cost housing' and 'affordable housing.' Houses built at a low cost or low budget may not always be affordable. And the problem trying to fulfill the need for affordable housing does not only exist here in the Bahamas. And even countries like the US the problem exists. Former Us President, Jimmy Carter, who has been involved in the construction and distribution of low cost housing for many years, believes that the time to rethink the low cost housing market. To make homes more affordable and more available. Too may people do not qualify for housing and for them that do, the time to get them processed and get them into a home is too long. One alternative he suggested is government subsidized rental units as an entry point for applicants who do not qualify initially and then some adjustments to the construction process to make homes more available.

Anyone actually listening to this talking suit? Who the hell is he to be running on about housing when a bunch of his constituents still living under tarpaulin more than a year after the hurricane.