THE Public Hospitals Authority said it has not implemented a new fee structure for wheelchair transport services for dialysis services at Princess Margaret Hospital, after concerns were raised about an internal memo made public proposing such a move. 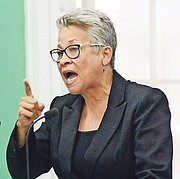 Englerston MP Glenys Hanna Martin rebuked the proposal yesterday, which according to the memo, would have introduced a wheelchair transport fee for dialysis patients at PMH next week.

A weekly charge rate of $150 for transport to and from the Dialysis Unit three times a week was outlined in the memo by Hospital Administrator Mary Lightbourne-Walker, who noted the proposal for the new charges was reviewed and supported by the Princess Margaret Hospital's executive management team.

Ms Lightbourne-Walker did not respond to requests for comment yesterday.

However in a statement yesterday, PHA confirmed it has not executed the new fee structure.

"Presently," the PHA statement read, "transport services are being provided via private services at prices determined by the private contractor. Additionally, the dialysis treatment fee per session has not increased from its gazetted fee of $275.

"The Public Hospitals Authority apologises for any inconvenience caused as a result of the circulation of this information and assures the public that the authority remains committed to its mandate of delivering the best in quality healthcare."

The PHA would not confirm the name of the private company nor the cost of the service.

However, Mrs Hanna Martin - the Official Opposition's shadow minister for social services - said the memo exposed the current mindset of the Public Hospitals Authority, adding her party would be closely watching the matter.

She also expressed concern over speculation about an impending fee increase for dialysis services.

"The proposal is outrageous," Mrs Hanna Martin said. "People who are on dialysis from my experience tend to be people with limited mobility, no insurance and catastrophic illness. To seek to target that category to raise revenue, it's obscene.

The memo sent to Superintendent Jeffery Henfield of the Transport Department, and dated August 23, refers to a verbal communication between Ms Lightbourne-Walker and the superintendent about the proposal.

The proposed charge rates were listed as: $25 for a one-way trip to or from the Dialysis Unit, and $50 for a roundtrip. This amounts to a weekly charge of $150 for three visits.

"We propose a start date of Monday, 3 September 2018. Customers desirous of engaging this service must pay at the Business Office and provide their receipt for the review of the transport personnel prior to transport," the memo noted.

"By copy of this correspondence, the dialysis services clinical management team leaders are advised and encouraged to convey this information to our customers."

The gazetted fee for ambulance services is $15 for Bahamians, and $30 for non-Bahamians.

A source close to the matter explained the memo did not follow established protocol to implement a new charge and came as a shock to some PHA board members. The memo has been rescinded.

The source noted the PHA is currently reviewing its fee schedule, but any changes would be authorised by its board and not PMH.

In expressing her anger about the proposal, Mrs Hanna Martin also said yesterday: "This appears to have targeted the most vulnerable in the health care spectrum. I am also told they are increasing costs for dialysis treatment. Dialysis is not optional, it's life or death. If you don't do it, you will die. I cannot see why the government has targeted this type of illness as a means of meeting expenditure for the hospital. I'm told they have other methodologies within health care sector where they can garner revenue, and it amazes me their imaginations have gone to the weakest link in this entire. You have the Physician's Alliance, why can't they look to the private part of the public health care system all those doctors and consultants why not put pressure on them?

"But it's more of the same contradictory behaviour, where (the Cabinet) did give themselves increased benefits, where they have created new and more executive chairman posts that didn't exist before for parliamentarians. They have used the Public Treasury in this way, but then on the other hand come with a heavy hand with poor people."

Many persons on dialysis can not afford these fees will they have to die, for lack of money due to these increase fees.?? They may put it off for now because they were found out. but this is their plan.

Dr&gt; Sands never had a heart, lots of stomach and backside. but no heart, But again it is the peoples time. this is what they**the majority of the voters voted for.

What's going on with Minister Duane and gastro-intestinal (GI) virus outbreak at the Sandals Royal Bahamland Resort... like has that passed and all health well at resort? Sandals been getting some negative attributed comrades guest international press over their handling virus outbreak.