Mother Of Eight Getting Ready To Run Marathon Bahamas 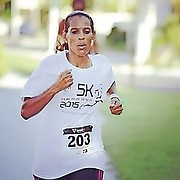 A RETIRED mother of eight is gearing up to participate in Marathon Bahamas in January.

For nearly 10 years, Sunshine Insurance (Agents & Brokers) Ltd. has been staging Marathon Bahamas and Z. Eve Maycock Dorsett has been there for almost every one of them.

January’s race will mark the 10th anniversary of the endurance event and Dorsett’s 10th year participating.

“They say when you get divorced, you find a hobby, so I got a divorce and moved to Nassau. I was really out of it and so I started walking. Then I started to run, and once I learned to run, I wanted to try Marathon Bahamas. I did so and I finished my first race in about three hours or so and now I can run a half marathon in one hour and 50 minutes,” said Dorsett.

The 54-year-old has run five half marathons and four marathons with Marathon Bahamas. She says she prefers marathons because she loves a challenge.

“I love running in my country. I’m from The Bahamas so I would not run another person’s marathon and not run my own. There are Bahamians who run all over the world and have never participated in Marathon Bahamas. They complain about it being too hot in The Bahamas and how much they prefer the colder weather.

When it comes to other activities, Dorsett said nothing has her heart like running. She starts at 4am running sometimes from the eastern end of the island to the Lynden Pindling International Airport.

“I like running and race walking. I can play softball and volleyball, but I don’t have time to obligate myself to any other sport. With running, I can do it at my pace. It’s very freeing,” she said.

However, Dorsett said she mostly runs alone and noted that her family supports her even though they don’t always participate.

“My oldest [child] is 35 and my youngest is 17. Nobody runs. They just like when I bring home a trophy or a medal. They always ask me, ‘Mommy, what did you bring home?’ However, I finally got my oldest daughter out to run with me and I’m trying to get them out to do the Susan G Komen Race for the Cure 5k,” she said.

The avid runner said her goal is to run January’s marathon in under four hours.

“It has always been my dream to run the Boston Marathon and you have to qualify for it at four hours, so I need to hit that target. If I don’t, I’m going to try until I do it. There is always the next year,” said Dorsett.

The mom of eight encouraged residents of all ages to start running, not just for fun, but also to benefit their overall health.

“You have to get up and start moving. It’s not going to be easy and it’s not going to happen in a day, not even a month, but it you keep at it, eventually you will be a very good, strong runner,” she said.