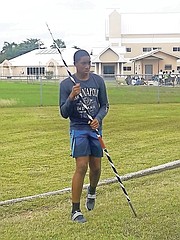 ON his first attempt, Blue Chips Athletics’ Keyshawn Strachan won the under-20/open men’s javelin on Saturday in the RC Athletics Throwers Meet at the University of the Bahamas field, becoming the first qualifier for the 2019 CARIFTA Games.

Strachan’s winning toss of 54.15 metres surpassed the qualifying standard of 53.57m. His nearest rival was James Gilbert of CR Walker with 20.60m.

Strachan, the St John’s ninth grader who won the silver medal at last year’s CARIFTA Games, also doubled up to take the discus with a heave of 41.32m, well ahead of second place finisher Fabian Storr of CR Walker with 27.57m.

Although it wasn’t a qualifier, one of the most impressive performances on the girls’ side came from Blue Chips Athletics’ Rhema Otabor, the reigning under-17 girls javelin champion and record holder with 41.80m, just off her best with a toss of 40-10m.

Otabor, a student of Nassau Christian Academy, needs to throw at least 41.80m to return to the CARIFTA Games.

The throwing coaches in the BAAA used the meet as an early qualifier for the throwers heading into the CARIFTA Games, set for the Cayman Islands over the Easter holiday weekend.

Meet director Ronald Cartwright, the veteran head coach of the RC Athletics Throwers Club, said he was pleased that more than 40 athletes participated in this year’s meet.

“The turnout was very good. The parents are here helping out, so it’s been a very good meet,” Cartwright said. “We just have to work harder when the kids come out to practice. One of the things we have going for us is that this is just December. We have about three months ahead of us, so we will have some qualifiers.”

Cartwright, who has been around coaching some of the coaches in the sport today, said he believes that the standards set by the BAAA are a little too high for the athletes to attain.

But he said if they want to make the team, the athletes will have to attain the standards or they will not be able to travel.

Corrington Maycock, head coach of the Blue Chips Athletics Club, was one of those athletes that Cartwright coached.

Maycock, walking with the aid of crutches after he underwent a minor surgery on his left knee on Friday, said a lot of the athletes are looking better than they did last year.

“The veteran kids looked like they have been practicing over the summer and the off season, so once again you can expect a good turn around this year for our throwers,” he projected.

“With the new leadership in place (in the BAAA), I’m hearing that if you don’t qualify, you don’t go, so I’m hoping that holds up.

“But I think something should happen in regards to that. So we’re looking for true qualifiers and not just putting people on the team because they came first or second. It’s only time, but we have some kids who are very close to making the qualifying standards. So we’re looking for some big things next year. As usual, we want the throwers to carry the mantel, as opposed to the sprints or the jumps.”

Bradley Cooper Sr, the coach of the University of the Bahamas, set the standard for all throwers to emulate. Now he’s sharing his expertise in trying to get athletes to qualify, not just for CARIFTA, but some of the other international meets next year.

“This is a chance to look at them and see where they are and what we have to do with their techniques and performances going into next year,” he said.

“Most of the throwers are doing their personal best performances. We are just trying to get them to meet the standards because we don’t just want them to go to CARIFTA, but we want them to be able to win medals.”

Cooper Sr was the winner of the under-20 boys silver medal in the discus at the inaugural Carifta Games in Hamilton, Bermuda in 1975. When the games came to the Bahamas for the first time the following year in 1976, Cooper Sr delighted the home crowd with his double dose of victory in the shot put and discus.

The two-time Olympian won a number of medals at both the Central American and Caribbean Games and Championships and Pan American Games. The highlight of his career came at the Commonwealth Games in Brisbane, Australia in 1982 when he struck gold. He still holds the Bahamas national records in the shot put (18.35m) and discus (67.10m) that he set in 1979 and 1986 respectively.

Here’s a look at the top three finishers in the disciplines of each age group: