Face To Face: When The Mountain Is Too High You Have To Ask For A Little Help 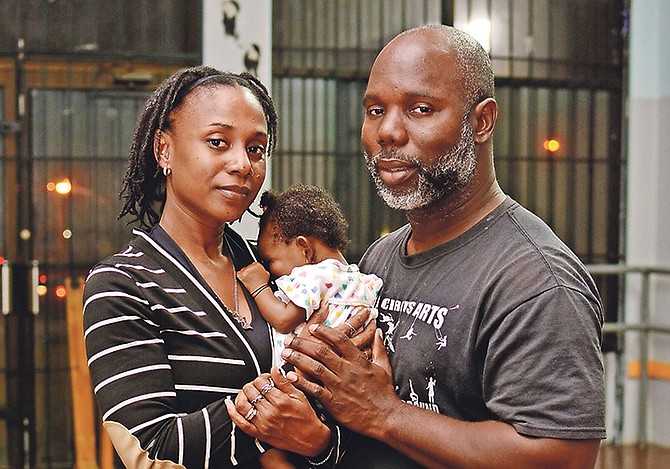 Jarvis and Dereka Grant are a power couple in the world of culture in The Bahamas. Their contributions to the development of the arts and culture is immeasurable and they continue to selflessly offer their time and energy passing on their skills to the next generation. During over a decade of their joint dedication to Bahamian arts, they have raised their children and naturally had to involve them in their tireless efforts, as their commitment calls for long nights and early morning hours of practice. The most recent addition to the family, a little girl whom they named Ja’Dei, is facing a medical crisis is too big for the Grants to handle on their own and now they are hoping for the love they have poured into the community to be returned to them at a time when they need it the most.

Before marriage, they were already making significant inroads in the development of the arts and culture. Jarvis is the well-known DJ “Broke as Hell”; he was my work colleague for many years at More 94.9fm. On the air and at parties and events around town, he was popular for his hype music mixes which always included some of the latest Bahamian talent. He was known for taking the party with him wherever he went. Additionally, Jarvis was always known in the world of dance. He is known as a vibrant performer and a teacher of the art form. He has performed in the casts of Cirque du Soleil, Universoul Circus and Bring in the Noise Bring in the Funk.

Dereka (nee Deleveaux) is an outstanding Bahamian dancer who has dedicated many years to the National Dance School. Countless dancers in the country can say they have come up under Dereka, who continues to do her best to impart everything she knows to them. Through her direction, the National Dance School has performed locally and abroad spreading Bahamian culture with pizazz. Dereka holds a Bachelor’s degree in Music, Dance and Theatre and has a Master of Arts Management Degree in Performing Arts Management. She also lived and worked in New York and Chicago before returning home to dedicate herself to the culture of her birth. 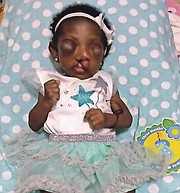 Baby Ja’Dei was born with bilateral microphthalmia (tiny eyes) and a unilateral cleft lip and palate in July of 2018.

Jarvis and Dereka met at the National Dance School in 1992 and married in 2007. Two years later, they fulfilled their dream and started Emanji Circus Arts. It is the first Bahamian Circus and the group has performed at numerous national and private events and has held several shows filled with stellar performances over the past decade. The group is growing as young, new talent have come to love this new opportunity to express themselves through circus arts. Emanji is a not-for-profit circus arts and entertainment company currently comprised of 25 young artists between the ages of 14 and 37, all born, raised and trained in The Bahamas.

With this full schedule, Dereka also must juggle her full-time job at the Department of Culture. In addition, the couple are committed parents to Jamai, 18; Ja’Daj, 8; Ja’Dal, 2; and their newest addition, five-month-old Ja’Dei. She was born with a rare condition and one which has called on the Grants to rise to the greatest challenge of their life to date. 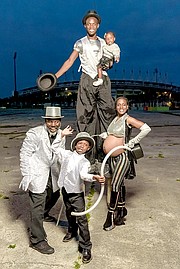 The parents with their other children Jahmai, Ja’Daj, and Ja’Dal.

There are no doctors in The Bahamas able to deal with microphthalmia and so medical treatment is being sought at Bascom Palmer Eye Institute in Miami, Florida. She will have at least one surgery in 2019 to remove the cysts and place ocular prosthetics in her eye sockets. She will also need to have surgery every three years to enlarge and repair her sockets as her face grows. A cleft lip and palate happens during the first trimester of pregnancy. The hard palate of the mouth does not join together all the way or not at all and the top lip subsequently does not join together, appearing as a split in the lip and a hole in the top gum of the mouth. A child born with this deformity will have trouble eating and thriving and may have trouble breathing depending on the severity of the cleft of the palate which in extreme cases can extend all the way to the nose. Ja’Dei’s cleft is considered a wide cleft that impacts all the way to her nasal cavity on the right side of her face.

She will have at least two surgeries by the time she is one to close the split in the lip and attempt to fill in the gap of the palate so that she can eat, breathe and speak normally. A team of doctors which include a specialised paediatric plastic surgeon, a specialised paediatrician, a specialised paediatric orthodontist, an ear nose and throat doctor and a paediatric speech therapist, will be required until she is at least 14 years of age. At present, the starting cost for the surgeries for a baby born with a cleft lip and palate is $75,000 in The Bahamas. Medical treatment is being sought at Rush University Medical centre in Chicago, Illinois which is much cheaper. When Dereka was about five months pregnant, an ultrasound detected the cleft lip and palate and professionals gave her and Jarvis the diagnosis. At that time, they began exploring information and researching hospitals in The Bahamas and in the US in order to correct the cleft once the baby was born. They were told that cleft is the second most popular child birth issue after the heart and that there were at least three doctors available locally to assist with the surgery, if they chose to have the operation done at home. For them, it was just a matter of price and they were still determining the best route to take. Although two ultrasounds were done, none of them gave any indication to Ja’Dei’s eye issues.

“We did not find out about her eyes until she was born,” Dereka said.

“The cysts in her bottom eyelids were so big that they looked like regular eyes on the ultrasounds. When she was born, the cysts were huge but by the third day, they reduced to the size they are now. It was on the fourth day that we got the diagnosis of bilateral microphthamlia (tiny eyes) with ocular cysts for the eyes. The opthalmologist who saw her in NICU (neonatal intensive care unit) made a strong recommendation for us to take her to Bascom Palmer Eye Institute as there are no doctors here in The Bahamas who can deal with microphthalmia.

“Our plan was to try to get both issues addressed at the same hospital at the same time, but there are very few doctors in the world that deal with this condition. It was after our second opinion trip at Bascom Palmer (our first was at Rush University ophthamology department) that we got further diagnosis of the disorganised eyes.”

Unfortunately, Ja’Dei’s challenges are considered pre-existing conditions by her family’s insurance companies since she was born with the deformities. The medical costs associated with her treatment will not be covered and must come out of pocket. Ja’Dei is scheduled to have at least three surgeries during the course of 2019 and the Grants are appealing to the public to partner with them to help in assisting with the costs of her surgeries, which begin at $68,000.

“Life has changed tremendously in terms of medical bills,” Dereka shared. “Ja’Dei is expected to need surgery every three to four years to correct her cleft and any eye issues that may arise as her body grows until she is 18-years-old and her body stops growing.

“We have had three small fundraisers for her (two before she was born and one right after) but these funds have already been depleted by doctor consultations and medical tests that she has already undergone. She is scheduled to have her first three surgeries by August, 2019. The cleft is fixable but specialists believe she will not have any sight. Other than her visual impairment she will be a normal child.”

In response to the mounting medical bills, the Grants and their Emanji team, which is really like an extended family, are coming together to present their latest production in Ja’Dei’s honour, with all proceeds going towards her medical bills. “The Doll Maker” will be held at the Dundas Centre for the Performing Arts on Mackey Street this December 27-30. The first night will be a gala night at 6:30 with tickets set at $100, which will include food and drink with the show.

There will also be a silent auction and a raffle. Matinees will be held on the following days at 3pm with ticket costs set at $15. Additionally, there are sponsorship packages available with incentive such as tickets and advertisement in the local media and in the souvenir booklet.

“Ja’Dei is a wonderful child,” Dereka exclaimed. “She is feisty and happy and you will know if she likes or dislikes something. She loves to explore her surroundings and loves music and dancing. We cannot imagine life without her even though she has only been here for five months. Her brothers and sisters love her so much and are always trying to help us do things for her. She is achieving her milestones right on track with her siblings when they were younger. She is teaching us that there is a difference between being blind and having no sight. It is all in the mind, as there are people with sight who are blind to all their possibilities.”

Online monetary donations can be made at www.fundrazr.com/JGrant2018. Anyone wishing to make a donation directly to the hospital or to purchase tickets for The Doll Maker can contact the couple at 820-4534 or email emanjicircus@gmail.com.