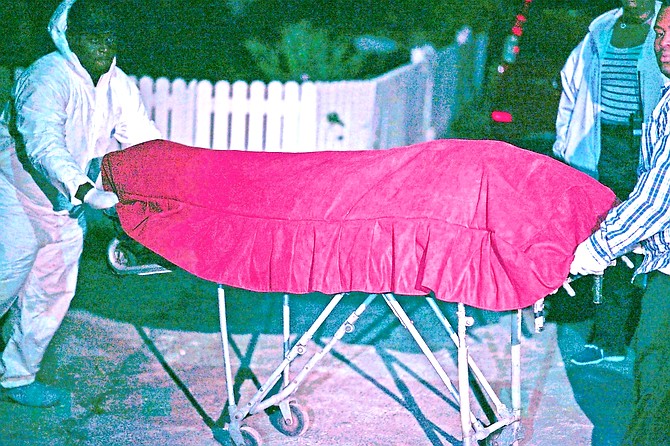 Police remove the body from the scene in Fort Fincastle.

A MALE was gunned down in the street Tuesday night in a shooting in Fort Fincastle, the 87th murder victim of the year.

The cries of the man's traumatised family filled the air at the scene.

Police said that shortly after 8pm, police responded to a report of gunshots in the area of Fort Fincastle. Upon arrival, officers found the body of a man lying in a yard, with gunshot injuries to the body.

Paramedics pronounced the victim dead at the scene in North Street.

As the hearse carrying the body departed the scene, family had to be restrained from grabbing on to it.

Police did not confirm the identity of the victim at the time of going to press.

Anyone with information is asked to contact the Central Detective Unit on 502-9991/2, Crime Stoppers on 328-TIPS (8477) or the nearest police station.

The murder was the first in a week. Two men, one being electronically monitored, were shot to death in Jubilee Gardens Wednesday last week in a car with a running motor. The homicides came a day after a man and his fiancée had been shot dead during a morning ambush at Sandilands Rehabilitation Centre last week Monday.

And then the police will make a statement condemning the victim rather than the killers and making a promise to find them and then there’s silence until the next victim is found. Dead of course.

The victim is the brother of a young boy who was also brutally murdered.

And with these idiotic statements, the police change the crime from cold blooded murder to justifiable homicide.