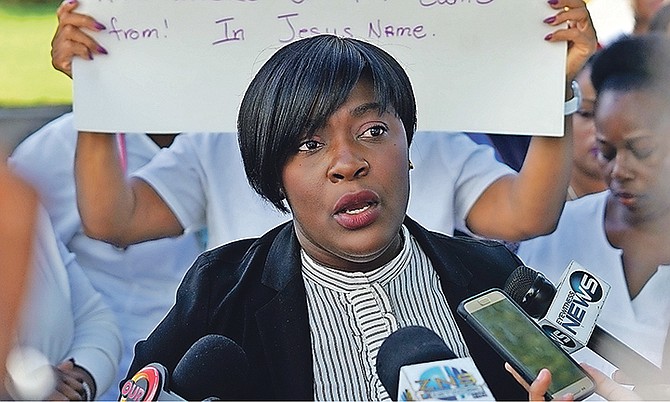 BAHAMAS Nurses Union President Amancha Williams yesterday slammed labour officials for what she called a deliberate delay to certify her union’s strike vote, claiming officials were pandering to the public for support instead of doing the “right thing”.

In a strong rebuke of the Department of Labour’s actions over the past week, Ms Williams said officials were intentionally working to “keep us from getting our vote,” hitting out at claims made by Labour Director John Pinder over what grievances were filed with department.

On Sunday Mr Pinder asserted the BNU only sought to prevent the implementation of the Public Hospital Authority’s proposed new shift system.

Last week PHA said it would indefinitely defer the change but maintained new shifts were in the best interest of nurses and patients.

Given the move, Mr Pinder told The Tribune: “They really don’t have an issue.

“They filed on the shift system and the PHA cancelled so there is really nothing to strike about.”

In response yesterday, Ms Williams said she was disappointed and saddened to see the level public officials would stoop to win the support of the public.

“This is sad, how could he say that? He saw issues in writing. He saw what we asked our members to vote to address, how can he say we only had on issue?” Ms Williams said.

“We have several issues outstanding between PHA and the Department of Public Health. This is just an avenue the minister and Mr Pinder are taking as they try not to give us our strike vote.

“Everything was done in an orderly fashion. We did it by the books. Now every day there is some other foolishness and run on; they want the public to side with them so they are trying to paint the picture that our issues aren’t there.

“I mean that’s all I can say, because it has been a week and nothing. Why is it taking so long? I’ve call the minister, the prime minister and John Pinder too. Each one is pointing at the next, saying somebody still have to do something and all that time we sitting around without our strike vote, with no resolution and no help.

“We aren’t angry, just like all those other unions the running around, we are frustrated.”

Mr Foulkes, in an interview with reporters outside of Cabinet yesterday, said he was hopeful BNU’s strike vote would be certified at some point yesterday or today.

However, up to press time last evening, no progress had been made on certifying the vote.

Mr Foulkes said despite the Public Hospitals Authority’s recent decision to indefinitely defer its new shift system for nurses, the union was still seeking resolution on just two other matters.

In a subsequent interview yesterday evening, Mr Foulkes said he could not disclose the issues, but maintained that he would address the matters with Health Minister Dr Duane Sands.

However, when he was asked of the issues, Dr Sands told The Tribune he was not aware of what those matters could be and referred all question on the matter to Permanent Secretary in the Ministry of Health Rena Glinton.

Attempts to reach the Mrs Glinton were unsuccessful up to press time.

When asked about BNU’s outstanding issues, Ms Williams said the union was awaiting responses on at least six matters - chief among which was an agreement with Dr Sands that he would seek from Cabinet, a five percent salary increase for all nurses.

“These are matters we have communicated to anyone that would listen,” she told The Tribune.

“If they say this new, they are not being truthful. They want to make us out to be the problem, but the public needs to know that we are just doing what we can to get what belongs to us.

“Labour in this country is becoming too political. We need fairness and truth. Give us the right that we deserve. We did what we needed to do by the books and they are still trying to take advantage of us.

The problem is that this PLP wannabe candidate ain't listening to none of her Union officials. . .I was told by one of them and seem to be on "an agenda" that they don't get. . .SHE WILL LISTEN TO NO REASONING!! They don't have a grievance to justify a strike vote!! They were striking because of the shift change matter. . .PHA says they withdrew the intended shift change. . .so there is no outstanding matter before them!! Yet she wants to go full speed ahead with the strike vote!! I say just gee it to them. . .let them make donkeys of themselves!! If this the type of dumb people the PLP is looking to present to us for election. . .chil please!!!

Lady, it's Christmas, IN JESUS' NAME, If you are really a nurse, practise nursing.