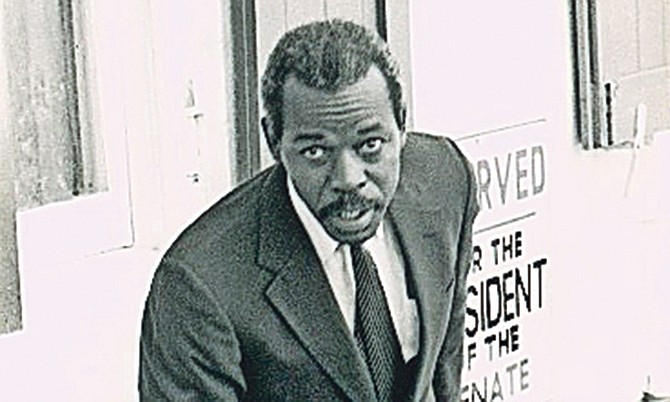 ONE of three men convicted of the murder of former Free National Movement Cabinet minister Charles “Chuck” Virgil two decades ago has had his life sentence reduced by the Court of Appeal.

Appellate President Sir Hartman Longley and fellow Justices Stella Crane-Scott and Sir Michael Barnett said Anthony Evans will now serve 40 years from the date of his conviction in July of 1999.

And that 40-year sentence, which is to run concurrently with a 25-year sentence for armed robbery, will have another two years and five months deducted to reflect the time he spent awaiting trial.

Based on those numbers, Evans has already served over half of his new prison term.

The appellate judges said their reasons for reducing Evans’ sentence was because the 40-year sentence reflects his “lesser role” in Virgil’s death than that of his co-accused, Ellison Smith, who was the one who actually shot the deceased.

The appellate judges said the judge who sentenced Evans “took very little amount or gave very little regard” to his “more limited involvement in the crime,” and said that in giving both men the maximum punishment of life imprisonment, the sentencing judge “treated both of them as equally culpable.”

Additionally, the appellate judges said the “failure” by this country’s judicial system to have Evans’ appeal heard for more than eight years, while simultaneously hearing Smith’s appeal, notwithstanding the “many letters written to the court,” was a breach of Evans’ constitutional right to a fair trial within a reasonable time, and that he should be “compensated for it.”

Virgil’s body was found in a well field behind the Bahamas Electricity Corporation on Soldier Road on February 15, 1997. Virgil was accosted outside of his condominium on West Bay Street and forced into his car.

Smith, Evans and another man, Charles Rahming, were convicted of the killing on July 10, 1999, and were sentenced to death as, at the time, the death penalty was mandatory for murder.

Evans, Smith and Rahming appealed their convictions and sentences to the Court of Appeal, which in March of 2000 allowed Rahming’s appeal, but dismissed Evans’ and Smith’s.

Their matters were remitted to the Supreme Court for resentencing.

The resentencing for both Evans and Smith took place before then-Supreme Court Justice Jon Isaacs, now an appellate judge, on September 24, 2010. They were both sentenced to life imprisonment for the murder conviction.

Evans and Smith then appealed their life sentences to the Court of Appeal; their appeals were lodged in November and December of 2010, respectively.

For reasons that are unclear, Smith’s appeal was heard in 2015, but Evans’ was not heard, despite the fact that on all previous occasions, their matters were heard together.

Meanwhile, Smith’s appeal came before the appellate court on six occasions between 2012 and 2014, and a reserved judgment was delivered on February 12, 2015.

In that judgment, the appellate court, differently constituted, set aside Smith’s life sentence and substituted a sentence of 45 years for murder, stating that “as heinous and despicable” as Virgil’s murder was, it could not “reasonably or properly be characterised or said to be within that category of murders elliptically described as the ‘worst of the worst’, or ‘the rarest of the rare’ so as to be within the ‘wholly exceptional category of cases within this most serious class of offence.’”

Based on Smith’s sentence being reduced, the appellate judges, in a written ruling posted online yesterday, suggested that it would be unfair to have Evans continue to serve a life sentence.