Alleged Killer In Custody After Breaking His Bail Conditions 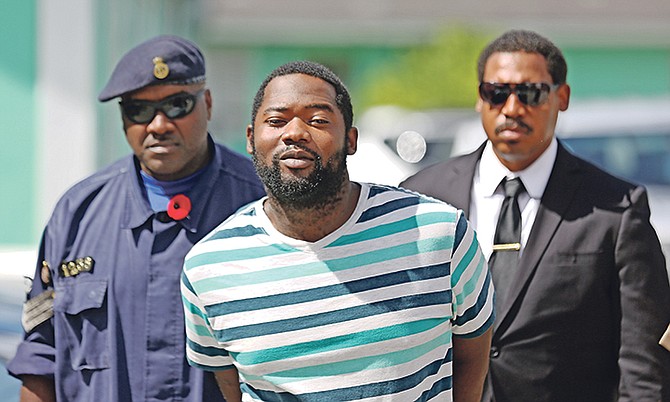 EIGHT-year-old Eugene Woodside Jr’s alleged killer has had his $50,000 pre-trial bail revoked for not honouring any of his reporting conditions since August.

Justice Cheryl Grant-Thompson ordered Lloyd Minnis to be “immediately remanded” into custody for his “flagrant disregard” of the bail conditions she gave him ahead of his 2020 trial.

According to the Crown, Minnis did not report to the Nassau Street Police Station as ordered for 12 out of the 23 working days in August.

It was also revealed by the Crown that Minnis somehow cut off and discarded his ankle bracelet because he claimed the device was burning his leg.

That discovery was made on December 6, after officers arrested the Coral Harbor resident in reference to alleged firearm possession. And it was at that time the officers observed that he wasn’t wearing the ankle bracelet.

Minnis was not charged in relation to the alleged firearm possession. However, the decision to tamper with and consequently damage his ankle bracelet yielded a $5,000 fine from Magistrate Samuel McKinney last week as well as an order for him to pay $1,652 in compensation for damaging the bracelet.

Minnis was also fined $1,500 for violating his bail conditions, or risk spending six months in prison. According to his attorney Ian Cargill, Minnis has paid off all of those fines.

However, Minnis’ damaging of his ankle bracelet, as well as him violating his bail conditions, led to the Crown making an application to have his bail revoked.

During yesterday’s hearing, the Crown submitted that Minnis’ actions showed a “blatant disregard” for the court’s order and that he was consequently no longer a “fit and proper” candidate for bail.

The Crown further submitted that Minnis should be made “an example of” to further deter others from violating their bail conditions.

It was also revealed in court that one of Minnis’ suretors put up her house in order to secure his bail. The suretor said in the beginning, after she first signed Minnis’ bail, she would constantly make contact with him to ensure that he was honouring his bail conditions.

At the time, she said Minnis always indicated that he was adhering to his bail requirements.

“Everything was good at first because I always used to check on him, because after all, I put my house up and that’s all I have,” she said. “And then if he go missing, and when time for court, the court take my house and I don’t have $50,000 to pay the fine, then I gone be homeless and all of that.”

Nonetheless, the suretor asked for Justice Grant-Thompson to give Minnis a second chance.

However, Justice Grant-Thompson said it was not up to Minnis for him to cut the ankle bracelet off his leg, stating that if the device was proving to be a medical difficulty, he could have petitioned the court or alert his attorney.

She also noted him missing his check in dates as pursuant to his bail conditions.

“For all of those reasons, I find a flagrant disregard of all of the terms and conditions of the bail which I have set for you,” she said. “And so therefore I am granting the application of the Crown and revoking the bail that was granted to you, and I’m ordering that you be immediately remanded into custody.”

In October 2017, Minnis, of Coral Harbour, was arraigned before the chief magistrate for murder in connection with the deaths of Eugene and Dennis Moss on September 25 of last year.

According to initial reports from police, officers received a report that a man and a child had been shot in the Rosebud Street area off Farrington Road.

Eugene, a third-grade student at Albury Sayles Primary, was in his home doing homework when he was shot by a stray bullet that entered the structure, according to initial reports from police. Moss, meanwhile, was pursued in the street by a gunman.

Both victims were taken to hospital where they later died.

On March 28 of this year, Justice Grant-Thompson granted Minnis $50,000 bail, with the stipulation that he surrender himself into custody at the Central Police Station by 6pm on September 7, 2020 for trial.

Justice Grant-Thompson ordered that until then, Minnis was to report to the Nassau Street Police Station every working day – meaning every week day – before 6pm.

He was also placed on a curfew and was ordered to be at his residence between the hours of 10pm to 6am daily.

He was further ordered not to interfere with the prosecution’s witnesses in the matter or commit any offences while on bail.