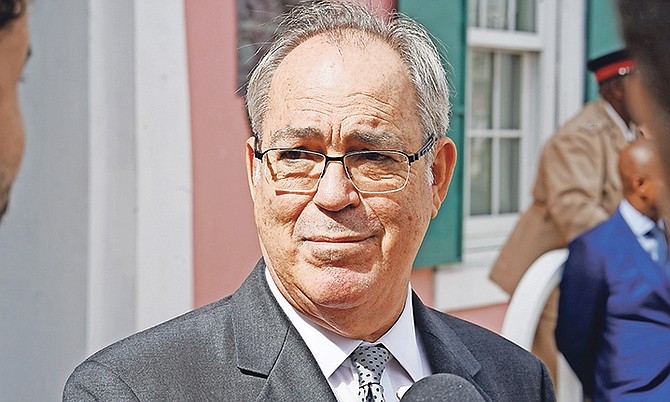 AS HE confirmed plans to speedily facilitate Bahamas-born deportee Jean Rony Jean-Charles’ return to the country, Minister of Immigration Brent Symonette yesterday said his case will bring the longstanding issue of fraudulent documentation to the forefront.

Mr Symonette made clear he was not seeking to establish the fraud issue as relevant to Mr Jean-Charles’ matter, or speaking directly to his case because he had not yet reviewed the matter fully.

However, he said there was an “overriding provision” that being born in the country did not mandate automatic citizenship, and noted Mr Jean-Charles had never applied for citizenship previously.

Mr Symonette pointed to draft regulations for the Carmichael Road Detention Centre and foreshadowed amendments to the Immigration Act during an interview outside the House of Assembly yesterday. “No,” Mr Symonette when asked whether the ruling signalled imminent changes to deportation practices.

“Persons born here, as I’ve said, should not normally be deported, that is a fair comment. I’m not commenting on what happened in the court case because I have not followed it. One thing that is very certain is there are a number of, and I’m not saying this relating to this particular case, there are numerous cases of fraudulent documentation.

“So the (Jean) Rony Charles case will bring the issue to the forefront. As you’ve heard the attorney general say, there are certain regulations, new amendments to the rules being drawn up which will put in proper perspective the detention centre etc,” he added.

“But there is still an overriding provision that persons have got to realise, is the mere fact that you are born in the Bahamas does not automatically make you Bahamian. There has to be an application for those persons who were born in the Bahamas to non-nationals to apply to the government for status, and that’s an overarching issue that cannot be avoided.

“So upon his return if he has not already done so, Mr Jean-Charles will have to apply to be registered as a citizen of the Bahamas, which according to our files he has not done.”

Attorney General Carl Bethel yesterday confirmed the government plans to “fully appeal” Supreme Court Justice Gregory Hilton’s Tuesday ruling, which ordered the government immediately issue a travel document for Mr Jean-Charles and reimburse him for his travel back to the country, declaring that his rights under the Constitution have been breached.

Justice Hilton furthered that Mr Jean-Charles, upon making an application, be issued legal status no later than 60 days after his return.

The ruling stemmed from a habeas corpus application made on behalf of Mr Jean-Charles, who had been detained at the CRDC for some three months before his expulsion from the country.

Justice Hilton is expected to deliver his ruling on six more habeas corpus applications on February 8, part of more than 15 separate cases challenging the lawfulness of detentions at the CRDC and the immigration safe house for women and children.

Yesterday, former Minister of Immigration Fred Mitchell called for the government to appeal the judgement up to the highest level, the Privy Council.

He suggested the Privy Council should be asked to determine whether the courts can substitute their decision for the Immigration Department, as opposed to remitting the matter to the executive branch of government for reconsideration according to law.

In a statement yesterday, Mr Mitchell advised the current decision should be stayed pending appeal.

Time for our government to start using computers for more than just solitaire....

And I hope immigration learned its lesson and stops the nazi/communist tactic of approaching people on the street and demanding papers because they look foreign. A lot of money wasted on this guy because of immigration officers breaking the law...

Ma Comrades, I been long posting that there has never been legislation in place to have allowed the immigration detention (IDC) center to operate... that if someone simply walked away from their forced confinement at the IDC,, there is no way in hell that you could legally charge them and obtain a court conviction for committing an unlawful escape from an unlawful forced into detention place. The red state should and can be sued for a Billion Dollars in damages for unlawful confinement of human beings.
Good Lord, even the Bahamaland Humane Society is more humane and lawful than the IDC.

If that was the case Mr. Smith would have done so. . .or why would the supreme court rule on a ha-bus corpus petition in favor of the complainant "from an illegal holding facility" . . . is the court condoning the illegal holding facility operation. . .knowing they are existing? Use ya head and leave the dumb nonsense to the politicians. . .

Ma Comrade, best you asks the courts. Illegal is illegal. In fact the public treasury should not be paying the salaries of government workers who perform their duties at a place never legalized. Go ask QC Brian Moree, if its all legal? If you're correct, then we no longer need fund the House of Assembly and its MP's.... nor upper red chamber senators?

So if Mr. Jean Charles papers were 'destroyed', does the government not have a copy of what they issued to him? If they do not, does it not suggest that the papers he claimed to have had were fraudulent or that he lied to the authorities? If that is so, is that not a criminal act?

These idiots are destroying, sorry, have destroyed our country with their bumbling incompetence!

That's where the government is going with their "review" of Mr. Charles' case. . .they have no record of him in our records. . .he says he was born one day with a different name and his family says he is another name. . .and another birthdate. . .messy situation at most!!

These affadavits in lieu of verifiable birth certificates, is what Wayne Munroe was trying to clarify and correct. But people were so caught up in their politics and cried foul. Whatever Mr. Munroe''s intention, he made a valid point. I can validate the birth records of my great, great, great grandparents. Lost and mishandled documents are a convenient excuse.

MR. CHARLES' CASE IF FAR DIFFERENT THAN THE FAMOUS "RED PARTY" CASE. . .the reds case was not trying to prove who was born where. . .but status at birth. . .the "'afterdavids" (lol!) . . .said that Mr. Charles was born here to two illegal parents of Haitian decent. . .Mr. Red was born here to one illegal woman of Haitian decent and one Bahamian citizen as father! Mr. Red was smack-dab Bahamian at birth (because who was parents at birth, not where was birth). . .Mr. Charles had to wait until 18-19 (some disagree) and apply for citizenship status! Mr. Monroe point was used by Mr. Smith on behalf of Mr. Charles. . .Munroe's point is already a point in law in this country. . .he was playing politics at that time!

The common issue here is the acceptance of affidavits from illegals, friends of illegals and in this case a sibling maybe 2/3 years older than the individual. This needs to stop, because it only facilitates fraud. This man has two names, two birth dates and his immunization card that was floating around social media, clearly showed the birth date was written over.

Registration of birth is a huge problem in The Bahamas. Why not have a Registrar General officer at the hospital to take the babies finger print before the child goes home. That will go a long way to solve the problem

Simply issue a birth certificate for non Bahamian citizens with parents name and photo ID on the form upon entry to maternity ward.

This is done from dog years (not finger prints).. . .each hospital birth is. . .I mean with a big IS. . .recorded before that child leaves the hospital! I was in the RG's office getting a birth record for my last daughter when a Haitian woman brought a yellow legal pad sheet saying that the individual was born in a house in cowpen road. . .all signed by a midwife. . .not even notarized by a notary public. . .she was furious at the clerk because she stated that she could not accept that document as proof of birth in the Bahamas. I could remember thinking: "what do some of these people dealing with"!

I just saw the lack of procedures last month. I pickup a relative from the hospital after she give birth and all they give her was a paper with the doctors signature and the hospital stamp indicating that she had a baby boy. They also gave her a birth registration form.

SYMONETTE HAS BEEN MINISTER OF IMMIGRATION AND ATTORNEY GENERAL UNDER PAST GOVERNMENTS LED BY HUBIGGITY AND TRUE TO FORM HE WILL ONCE AGAIN DO ABSOLUTELY NOTHING TO ADDRESS THE SERIOUS ILLEGAL IMMIGRATION ISSUES TEARING APART THE FABRIC OF OUR SOCIETY AND THREATENING OUR NATIONAL SECURITY. SYMONETTE AND CARL BETHEL WILL ONLY GIVE LIP SERVICE TO THE ENORMITY OF THE ISSUES INVOLVED IN PROPERLY FIXING OUR ILLEGAL IMMIGRANT CRISIS. BOTTOMLINE: SYMONETTE, MINNIS AND THE ENTIRE FNM PARTY LEADERSHIP WOULD RATHER PANDER TO THE "HAITIAN VOTE" THAN DO THE RIGHT THING EVEN THOUGH 50% OR MORE OF THE "HAITIAN VOTE" IS LIKELY ATTRIBUTABLE TO ILLEGAL IMMIGRANTS WHO HAVE OBTAINED BAHAMIAN STATUS BY WAY OF FRAUDULENT DOCUMENTS THAT HAVE BEEN "SOLD" BY CORRUPT OFFICIALS WITHIN THE DEPT. OF IMMIGRATION AND REGISTRAR GENERAL'S OFFICE (I.E. REGISTRY OF BIRTHS).

Now you know that I don't follow you many places. . .but I must say that I too am wondering "what Symonette is dealing with". . .the activist judge in this ruling, the illegal Hatitian community, Fred Smith et al all have denied the Bahamian constitution its ''right to rule our nation without interference from outsiders" . . .and BS seem "geeing them the kitchen sink and een listen ta da peoples dem"! Make no mistake, I don't believe that the people are fighting Mr. Charles as much as they are pissed with Mr. Smith. . .who is so spoiled and biased that now he brought down the whole house on his people's heads. . .that ruling has long and detrimental effects for the illegal immigrant community. . .and for those who were born here to illegal parents and missed their constitutional application dates. Don't forget that IRC requested that all children of illegal parents be deported with their parents. . .

Well Mudda, I certainly hope you are wrong this time!

The basic problem in The Bahamas is the ability for rank & file civil servants to competently create, file, store, and retrieve Government documents .......... every Department has the same challenge ........ and "missing files" tend to retard or thwart many a person's career, promotion or personal life situation or the ease of doing business........... It slows down or stops overall productivity in the country.

You are 100% right sheeprunner. I went to the Registrar Generals office for a copy of my birth certificate and my mothers name was spell wrong. I was fortunate to have a handwritten one from the 1970's or else they would have required me to get an affidavit sign by someone who is older than my eighty-two year old mother. Imagine that.

Sheepr I feel your pain..you trying damn hard to save this country ......but......many are actually well trained but will turn a blind eye as they part of the nomenklatura, They have to tip toe for fear... Even educated Lawyers will tell you its a conflict to challenge a govt or bank for a customer who got ripped off and can least afford it. Plenty Bahamians get really hurt and noone to turn to. No ombudsman, no financial consumer protection bureaus,.....The poor suffer and the workers who serve the people gets paid. Hopefully now we are so far getting a few select investigations....Dr Minnis is trying....