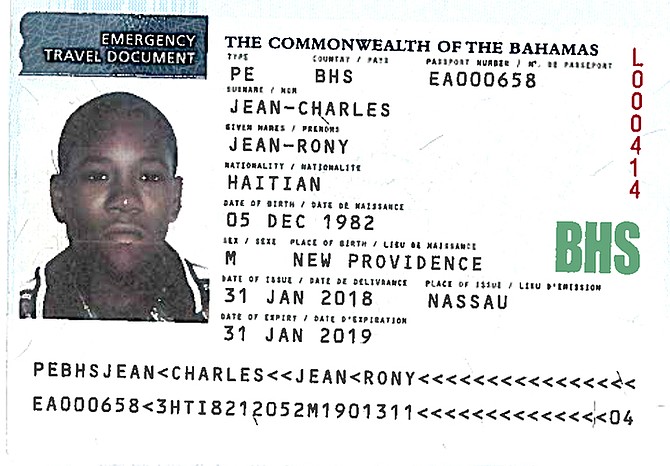 THE Passport Office has issued an emergency travel document valid for one year for Bahamas-born deportee Jean Rony Jean-Charles.

The document was issued on January 31, and lists the 35 year old as a Haitian national, according to the copy obtained by The Tribune.

The embedded picture appears to be Mr Jean-Charles as a minor, which invokes claims made by relatives that he had obtained several travel documents before his most recent one was destroyed by fire in 2016.

Attorney Fred Smith told The Tribune he plans to protest his client’s identification as a Haitian national in court, noting his receipt of the document was not to be regarded as an acceptance of that status.

Yesterday, Prime Minister Dr Hubert Minnis told the press he had not seen a recent court ruling regarding Mr Jean-Charles’ case, and could not make a comment.

“I must read a ruling in its entirety,” Dr Minnis said. “The entire ruling would be studied, looked at, and we will make decisions that’s in the best interest of the Bahamas.”

He continued: “I have not seen the complete ruling so I cannot make a comment. Believe me, our attorneys and others are reviewing the ruling in its entirety.”

He renewed his call yesterday for the government to begin the process of adhering to the principles established by Justice Hilton’s ruling, foreshadowing “mega class action”.

“I welcome any appeal by the government,” Mr Smith said, “the sooner that the appellate court all the way to the Privy Council adjudicates on these illegal and unconstitutional expulsion, the sooner the Bahamas will become a nation governed by law rather than ministerial dictate. Mr Damian Gomez and I and the rest of the legal team are anxious to have the appeals heard, as long as in the meantime all other aspects of the judgment are respected.

“In particular,” Mr Smith continued, “that when Mr Jean-Rony returns to his birthplace, his right to work and to enjoy all of his constitutional and civil rights are not tampered with.

“I urge the government to bring back every person that has been unlawfully expelled in breach of the Constitution and the Immigration Act. I beg them not to wait for a mega class action, by thousands who are in forced exile from their homeland, before they take action to respect the Constitution.”

Meanwhile, on Wednesday human rights group Amnesty International called on the government to immediately implement the decision of its Supreme Court, and stop discriminatory practices against people of Haitian descent.

“This judgement sets an important precedent for the Bahamas and sends a clear message to the wider region about states’ obligations to guarantee the right to nationality and non-discrimination in line with international law,” said Erika Guevara Rosas, Americas director at Amnesty International.

A deportation list for November 24 was filed by the Immigration Department in habeas corpus application hearings in the Supreme Court, which confirmed at least five people born in the Bahamas were deported with Mr Jean-Charles.

Mr Jean-Charles was detained at the Carmichael Road Detention Centre for three months before he was expelled from the country to Haiti on November 24, 2017.

In his judgment this week, Justice Hilton ordered the government to immediately issue a travel document for Mr Jean-Charles and reimburse him for his travel back to the country, declaring that his rights under the Constitution have been breached.

Justice Hilton said that Mr Jean-Charles, upon making an application, must be issued legal status no later than 60 days after his return.

In addressing Mr Jean-Charles’ arrest and detention, Justice Hilton noted that while Article 19 of the Constitution recognises the power of the state to detain and expel non-nationals, it must be done “within the four corners of the law”.

He further stated any detention not authorised by law would be a “breach of the individual’s constitutional rights; and entitles that person to compensation under Articles 19 (4).”

Based on section 18 of the Criminal Procedure Code, Justice Hilton stated if an individual is apprehended by immigration officers for allegedly committing an offence, that individual cannot be detained for more than 48 hours before being charged and taken before a magistrate.

Over the past year, The Tribune has reported on the unconditional release of more than a dozen migrants – some of whom were referred to by state officials as “long term detainees”, with detention times ranging between two to six years.

In some cases, migrants were released before court proceedings had begun.

In July, four migrants were released after being held for more than two years despite having received refugee status by the United Nations High Commissioner for Refugees.

Justice Hilton is expected to deliver his ruling on six more habeas corpus applications on February 8, part of more than 15 separate cases challenging the lawfulness of detentions at the CRDC and the immigration safe house for women and children.

Ma Comrades, too bad the Imperial red state feels so strongly to beat up on Jean Rony, but likes RBC (Canada) - they only see us as of the LOWER CLASS..... but again they rule by the colonial Imperial mentality. Jean Rony, will cost serious damage to the propellers this Imperial red state and its public purse once he gets his full day in court. This goin be some major efface between the King's Council and AG Carl Wilshire, if it even puts up a defense against paying Jean Rony his $1 million.

It's confusing. Haitians don't want to be called Haitians on documents, but want to ride in cars on Bahamian streets waving Haitian flags.

Mr. Smith sees that Haitian nationality "kills" his case. . .Mr. Charles will be sent back later. . .that document puts them in a no-win situation. . .hard-up against the constitution!! Them legal "eggheads" are playing "gatcha" legal poker. . .

Hahahahahahahahahaha. . .Mr. Smith ya "jookin-up" begins. . .they permitted travel documents to a Haitian. . .not a Bahamian! Mr. Smith knows the national repercussion of that recorded nationality. . .the government is telling THEM where this pyrric victory for them is going. . .he can come and state his case. . .as a Haitian. . .constitutionally he is "swing". . .thanks to his activist judge and Mr. Smith. Now he has to fight our constitution on the matter of nationality. . .which go straight to article 7 of the constitution. . .which is entrenched and cannot be change by no court or parliament. . .bringing this fight between the Haitian community and the Bahamian people. . .no matter which decent. Mr. Smith sees his problem" by them giving and will try to block it by going to court . . .but with an empty hand. . .he cannot get the constitution set aside for his client. . .

Ma Comrades, Nobody is saying Jean Rony is a Bahamalander but that immigration had no basis in law to swoop him off public street whilst out buy single cigarette. The learned Justice never spoke to define Citizenship but stuck to his expulsion from the Bahamaland as being unlawful.
Ma Comrades, don't you think its the responsibility our elected government to finally sort our one time and for all the inexactness when it comes down to who exactly gets to become a citizen and under what clearly set out conditions will they qualify?

The Dram King said there are thousands of cases like this one. When they maybe ten thousand are brought before the courts and "The Judge" gives them each a million dollars. Then the Bahamian people who asked "where the VAT money gone??" will know for sure where it all went..

The Haitian constitution confirms that Jean-Rory Jean-Charles is Haitian - possibly born in The Bahamas.

Can we get a magistrate to send him back home (Haiti) on Monday?

The Outspoken QC is already preparing his case for damages and did Judge Hilton also speak of damages in his ruling. ??. It appears Millions will be awarded to whom ever. It is the peoples time in deed.

The Bahamas will very soon be a little Haiti. as the undisclosed amount Dona suggested. They will all sing 'it is finished the battle is over"

if THE Bahamas was broke and busted before it will soon be worse. when they will have to pay out millions of dollars.

With all the fuss about Monsieur Rony, or is it Monsieur Charles, who may or may not have been born in the Bahamas in either 1982 or 1985, and is certainly not a Bahamian, I trust the powers that be will not forget about the thousands living ILLEGALLY in the so-called shanty towns, operating ILLEGAL businesses, stealing electricity and endangering LEGAL businesses, residences and BAHAMIAN citizens around them.

Can any one believe that PM Minnis said he has not read this ruling? Shame on him. What is he doing? He goes to Grand Bahama once a month to eat wine and dance they say ,because GB is not getting any better that is a fact. even if he has not read the ruling which he should have, He should be abreast of the situation. then he recited his pat answer "I am a doctor" The man can not give a sensible answer to a sensible question for sure,:

Both he and Symonnette claim that they have not been following the matter. I believe them. They have both been clear on which people they support and it is not Bahamians. With no pressure or apparent interest from the top, brace yourself for yet another lackluster defense of the constitution.

Anyone has read Deuteronomy 28?......It's speaks of God sending another nation who does not speak your language to come in and take your land, wife, husband, children...etc......Has this come upon us? Has our former PM's been able to make us see the wrong enemy? Are we our own enemy? Has our so called Christian spirit mislead us into accepting to many illegal immigrants into our Bahamaland? ..........What say you TalRussell?

How about when Europeans took your forefathers from Africa and sent then to America and the West Indies. That is the prophecy fulfilled.

I'm curious.........can the Department of Immigration deport a person assumed to be an alien out of the Bahamas without first being taken before the courts........

I recall reading the constitution and seeing that illegal entry and also residing illegally (I believe) are summary offences. Meaning that one is presumed guilty based on the circumstances, e. g. being caught red handed on a sloop or having no documented proof of legal residency. This is among the issues that need to be cleared up in a judicial review and not some rogue judge’s ruling.

There is no question to answer here. Jean Rony Jean-Charles was born of Haitian parents which according to the Haitian Constitution regardless to"where" he was born he is automatically a Haitian national.

Send him AND his parents back to Haiti and they can enjoy Haitian flag day in the country they love!

Still waiting to hear who got charged on that masssive police bust that netted 30 people being arrested. Large Quantities Of drugs guns ammunition cash helicopters and stolen cars

Fred Smith I think has finally out done himself on this one. I must think him though for finally getting this issue constituional before the courts. I am quite certain this will end up at the privy council,in London where they are trying to chase out the illegal immigrants. Good luck Freddy boy. It aint looking to good for you on this one

The way people seem to be outraged by this Jean-Rony case, he had better have 24/7/365 police protection on his return or he surely will not live to see a single appeal take place?

Surely not Bahamian tax-payer police protection? The man obviously has the means to pay for private protection!!!

Creole Fred must take this man into his personal home and save this country some money from this waste of time court case.......... and how old was Jean Rony in that document photo??????? ........ That does not look like the guy in the Tribune story.