Carifta Mascot 'Iggy' The Iguana A Blast At Palmdale Primary 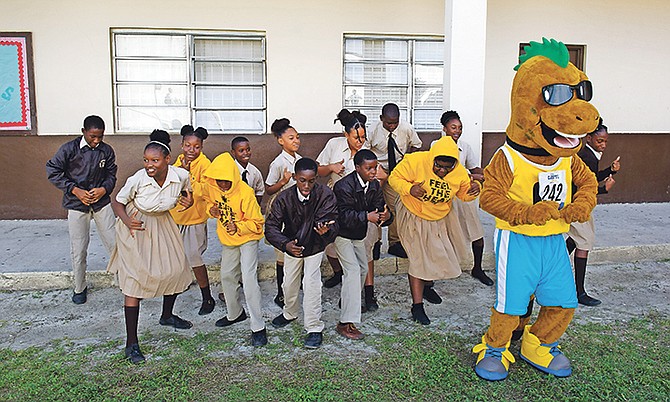 THE tour for Iggy, the mascot for the 2018 Flow CARIFTA Games, continued yesterday with Palmdale Primary as the latest host school.

It continued the series of public appearances of the iguana, a rare species found in the lesser populated islands of the Bahamas mainly in Andros, San Salvador, Inagua and Exuma.

In introducing Iggy, Bahamas Association of Athletic Associations’ public relations officer Philip Gray said he is a “calm, cool, consistent performer, always hitting the mark at the right time. He is fun to watch as he maneuvers to outwit his opponents. He is a fierce decathlete that is good at every event on and off the track.Draped in the Bahamian uniform, Iggy made a grand entrance with eight members of Palmdale’s track and field team as they performed to the tune of the “Theme for Rocky.”

Before he descended the podium and interacted with some of the students, Iggy performed to Julien Believe’s “Caribbean Slide.”

Davis Thompson urged the athletes to take advantage of the opportunity of competing at the region’s top junior meet once they reach the age of qualification.

“When I was your age I did not know things like the CARIFTA Games existed. Many young athletes were able to raise to the public awareness on this stage and have become household names in track an field. Athletes such as the Bahamas’ own Shaunae Miller have starred at these games and Usain Bolt of Jamaica who competed right here at the Bahamas in 2002,” she said to the group of primary school students.

“Education is very important in helping you to achieve your goals. Whether its track and field, whether its basketball, baseball or whatever you want to play, your education is important. The gifts that God blessed you with will always make a way for you.”

For the eighth time, the Bahamas is set to host the region’s premier junior athletics talent at the Flow CARIFTA Track and Field Championships.

Under the theme “Faster Further, Higher”, the North America, Central America and Caribbean Athletics Associations (NACAC) will stage the 47th edition of the meet, March 30 to April 2 in honour of the late Dr Bernard Nottage. BAAA President and CEO of Flow CARIFTA Bahamas 2018, Rosamunde Carey, CEO Carifta 2018, said the Bahamas will again make history as they welcome the region to the Thomas A Robinson Stadium.

Davis-Thomspon is one of six Bahamians to win the Austin Sealey Award, given to the meet’s top performer and was a member of the last Bahamian team to take the title.