Bahamas 0-3 after 96-63 loss to Dominican Republic 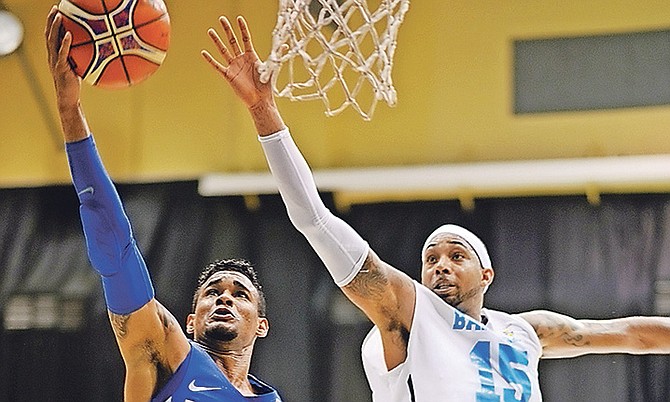 The Bahamas in action against the Dominican Republic. Photo: Shawn Hanna/Tribune Staff

The Dominican Republic caught fire from beyond the arch in the second half and, in particular, during a third-quarter run where they took control for good en route to a win in the latest World Cup qualifier.

The Bahamas suffered a 96-63 loss to the visiting Dominican Republic as they opened the second window of play in the FIBA World Cup 2019 Qualifiers at the Kendal Isaacs Gymnasium last night.

The win moved the Dominican Republic to 3-0 and atop Group D in the qualifiers while the Bahamas remains winless at 0-3.

The Bahamas trailed by just one at the half (35-34) but the DR opened the third on a 12-4 run, capped by a Liz fastbreak layup to go ahead 47-38 just three minutes into the period. They would go on to outscore the Bahamas 35-19 over the 10-minute stretch.

Montero made the first of five threes for his team in the quarter to give them their first double-digit lead (50-39) at the 6:35 mark.

Ronald Ramon made another three to put them up 13 and dished a no-look assist to Liz and gave the visitors a 60-45 lead.

Michael Bain’s three-pointer brought the Bahamas within 12 but the DR would answer once again, this time with a three-point play from Adris De Leon.

The Dominican Republic went on to lead by as much as 36 in the fourth en route to the win.

Both teams shot 51 per cent from the field in two-point range, but the difference was beyond the arch where the Bahamas shot just 21 per cent and the DR made 39 per cent.

The visitors won the battle on the boards 45-37, forced the Bahamas into 23 turnovers and scored 22 of their 35 made field goals off assists. An eager home crowd had many reasons to cheer in the first half before the second half collapse. Carey opened the game with a runner on the very first possession and the Bahamas took an early 6-2 lead. Eugene Bain was effective off the bench scored on his first two shot attempts. His baseline jumper gave the Bahamas a 13-10 lead and the Bahamas’ went to its depth early, with 10 players seeing action in the first. Michael Bain dished an assist to Robert Nortmann and the Bahamas took a 15-13 lead at the end of the first quarter.

In the second, the Bahamas took a 21-17 lead on Nortmann’s putback, but the DR scored five unanswered points to take the lead, 22-21. Carey grabbed the lead back for the Bahamas with a corner three on the ensuing possession. The Bahamas maintained the advantage for much of the second and Shavano Cooper’s reverse layup gave the Bahamas a 32-27 lead with 2:42 left in the half. The DR got back to back three pointers from Liz and Montero to regain the lead and they took a 35-34 lead into the half.

In the first window, the Dominican Republic defeated the US Virgin Islands 99-89 and followed with an 88-76 win over Canada. The Bahamas lost 93-69 to Canada and 93-85 to the USVI.

The Bahamas returns to action at the Kendal Isaacs Gymnasium this Sunday at 8pm in a rematch against Canada.