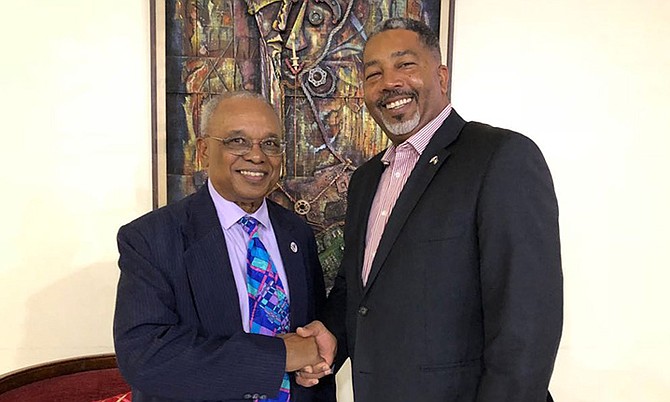 PORT-AU-PRINCE, Haiti – The Bahamas’ advance delegation to the 29th Inter-Sessional Meeting of the CARICOM heads of government arrived in Haiti Thursday afternoon.

The two-day Caribbean Community and Common Market (CARICOM) conclave will be held on Monday and Tuesday. The Bahamas’ delegation will participate in a number of high level and other meetings leading up to the Inter-Sessional assembly.

Led by Transport and Local Government Minister Frankie Campbell, the advance delegation was met at Toussaint L’Ouverture International Airport, Port-au-Prince, by Bahamas Ambassador to the Republic of Haiti, Jeffrey Williams and Embassy Staff.

Key items to be addressed on the agenda of the Inter-Sessional assembly include Disaster Management and Recovery, Tourism, Regional Security, and Blacklisting and De-Risking. CARICOM Heads will also discuss the Enlargement Policy for the Community with a view to addressing applications received for Associate Membership in CARICOM.

CARICOM Heads of Government convene two meetings annually. The major meeting is the regular meeting of the conference, which is a formal meeting that is held annually during the first week of July and which coincides with the anniversary of the signing of the original Treaty of Chaguaramas, on what is now known as CARICOM Day.

Inter-Sessional Meetings of The Conference are held annually in either February or March and are less formal and less ceremonial than regular meetings. The bi-annual meetings provide CARICOM Heads with the opportunity to cover a wider range of topical issues within a given period.

Yep, in less than another decade Bahamians will find themselves doomed to Haitian rule in their own country. The more aggressive rooster always wins the cock fight.

It will be so if you and your ilk are the government. . .shame on yinna political "light weighs" continue with yall dumb ways. . .THAT MAN IS A BAHAMIAN! How many of yall have or had non-Bahamian parents! Both of my parents are not Bahamians. . .I was born here. . .I hold Bahamian citizen status. . .and of my parents' home country! There are thousands of Bahamians just like I am. . . we have been outside for an education and because of the " conch salad feeling in our soul". . .we returned here. . .even when we did not have to do so. . .THIS IS OUR HOME BY BIRTH AND FEELINGS. . .

ILLEGAL MIGRATION seems to have been inadvertently left off of the list of KEY items on the agenda! Glad to see the travel belt tightening continues.

Ma Comrades let us reflect on how PM of Barbados ducks negativity, PM Freundel Stuart, in a swift and unexpected move, cancelled parliamentary proceedings in Barbados on Friday, ostensibly due to insufficient members on the government side to constitute a quorum, but which opposition leader Mia Motley claimed was to prevent the tabling of a critical Public Accounts Committee (PAC) report.

Now onto we own PM Minnis - who cuts Wednesday's parliamentary proceeding short to takes swift flight to Haiti to ducks negativity awaiting his government if he had tabled Oban's Head Up Agreement before the House of Assembly. (There's no making this up}.
I watching when the PM does relent from his ducking to table Oban's Heads Up Agreement cause if he tries pull off what I think his administration is planning - once exposed will spell swift ending his Imperial reign as nation's 4th PM, Stay focused to this hereto Tribune blog page once the PM makes his Oban master play.... cause I done figured what PM thinks is best Oban hand play.

There is no begging who goes to Haiti to beg? In my opinion he should ask those primitive Haitian leaders to tell there people to stop invading this country, we should break ties with them.

(Sigh). Then again, I should had noticed the username, then I wouldn't be surprised at all.

You know, both sides need to work together at this issue. Cutting ties and insulting them isn't going to help, it's actually putting us backwards if that was the case.

Sak pase with the public purse footing yet another trip abroad for Ma Comrade prime minister and his delegation?

Sak pase indeed. A fine example of belt tightening. We just love our entourages when The People pay!

Comrade DDK, not saying its whole truth but the rumours mill coming out Haiti is thick of the trip abroad being likes a undercover mission get instructions directly from el presidente de la República de Haití, on the advance planning of Haitian Flag Day 2018. Somebody should looks into this?

TAL DO YOU SUGGEST THAT THEY WALK? Silly PLP peoples them. . .act like they een gat no sense. . .

The Bahamian Government has to stand up with iron balls and call this Haitian illegal immigrant problem what it is .......... We have studies going back to the 1960s that pointed to this as a national security risk ......... and 60 years later, we are still playing ostrich with Haiti.

But if Minnis is using his personal lackey (Creole Frankie) to be the emissary to the Haitian Government, NO serious progress will be made on the non-documented immigrants and their generations born in The Bahamas, and who have been living here for the past 60+ years with NO legal papers ....... including Creole Frankie.

Creole Frankie's Haitian Ma came here as an illegal immigrant, allegedly got pregnant for a Bahamian man (who is dead), had Frankie in 1967, got no birth certificate, has a dubious affidavit, got a dubious citizenship past his 19th birth year .......... worked for SLOP as a RBPF personal assistant ........ RED FLAGS????? .......... Now he is a MP and emissary to Haiti.

My my. . .what manner of jack asses my Bahamian peoples them can be. . .quite frankly if yinna continue to be such "dumbed down" thinkers. . .THEN FOR SURE WE NEED SOME OTHER PEOPLES DEM TO COME HERE TO SAVE THIS NATION FROM YINNA ANDROS YARD CHICKEN KIND OF THINKING!!

This Campbell guy has to have a DNA test to prove he's is Bahamian. Why is he being taken at his word?

This is the real slippery slope scenario today ........ Should Creole Frankie be an MP with NO real bona fide evidence that he was born here and has authentic papers?????? ....... Creole Frankie poses a bigger problem than Creole Fred and Jean Rony right now ....... He is in our Cabinet!!!!!!

So what that will prove. . .he has DNA markers that may place him back into populations from the Western African Coast on back to Mesopotamia etc. He had an affidavit to prove has was born here! Ya know. . .one of them things that LOP had to prove he was born here. . .and not in JA!

You have no insight into how DNA testing is done. Even though his 'father' is dead any living relative from his fathers side (preferably brothers) can provide a sample to determine with a high degree of specificity if he is related to that gene pool! If not then we know scientifically that he lied about having a Bahamian father and he is not entitled to be in the HOA, no matter what his affidavit says!

Soooooooooo, why will Creole Frankie not take a DNA test fully paid for by the PHA, authenticated by Medical Association and declared to be so, by Mr. Speaker himself ........ We cannot have this great mystery dragging on forever (Who is Creole Frankie's daddy?????).