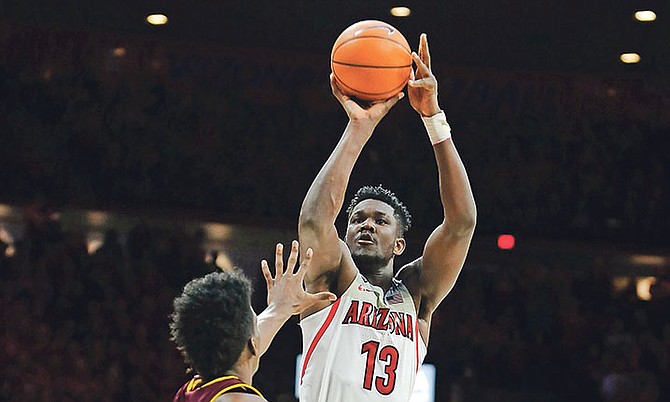 Arizona forward DeAndre Ayton, of the Bahamas, shoots the ball over the defence of Arizona State’s De’Quon Lake during the second half of Saturday’s game in Tucson, Arizona. (AP Photo/Ralph Freso)

Ayton earned his second PAC-12 Player of the Week honour within the last month.

He finished with his 10th double-double of the season with 23 points and 19 rebounds. His tip-in with 11 seconds left to go was the deciding score as the Wildcats protected home court at the McKale Center in Tucson, Arizona. “I hope everybody in McKale realises what 23 points and 19 rebounds feels like for a freshman,” Wildcats head coach Sean Miller said. “You don’t see that very often.”

His 19-rebound total was the most by an Arizona freshman since 1973. It was also his fourth game with at least 20 points and 10 rebounds. He also had two additional games where he was one point shy of an additional 20/10 games.

Ayton is only the eighth freshman to earn the award since it was created in 1983. He was previously named the PAC-12 player of the week on December 4 after he averaged 20.5 points and 9.5 rebounds per game in wins over Long Beach State and UNLV. That award-winning week was highlighted by his 28 points, 10 rebounds and three blocks in an overtime win on the road against UNLV in a head-to-head matchup with Brandon McCoy.

His rebounding numbers lead all freshmen and his 10 double-doubles are fourth among all players.